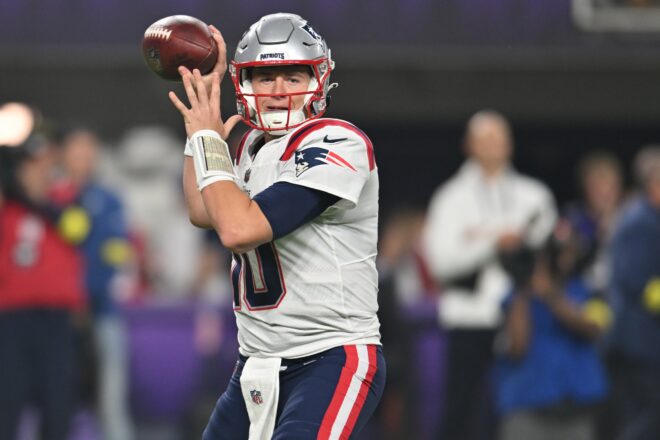 Good morning. The Patriots take on the Arizona Cardinals tomorrow night, and this is a really big one for the team. Their window for making a playoff berth is shrinking, and there is little to no room for error.

However, they are just a game behind the Jets and have the same record as the Chargers, but New England has the upper hand… for now, over LA. The Jets are facing the Bills and that will be a tough matchup in Buffalo, but on Monday the Patriots could be right back in the playoff picture. The Chargers are playing Miami on SNF.

At this point it is one day/game at a time. But contrary to popular opinion, the Patriots are far from out of the playoff picture. The rest of the schedule is what it is, but for now, play the game on the schedule.

Bill Belichick: The head coach knows it is an uphill climb for the playoffs to become a reality this year because of the final five-game schedule. Belichick never looks too far ahead, but is this make-or-break time for his long-term future with the team?

According to the Boston Sports Journal’s Greg Bedard, it may very well be. On Friday, he had this to say about the matter.

“People around this team, including some very good sources of mine who have never steered me wrong, have basically indicated that this Cardinals game on Monday night is among, if not the most important game of Belichick’s career post-Tom Brady. If the Patriots don’t win this game, then I think there is a serious question about whether Belichick is the future head coach of this team.”

Brock Purdy: The 49ers’ third-string QB is no longer “Mr. Irrelevant.” The Niners’ playoff hopes now rest on a rookie 7th-round draft pick now rest on Purdy’s shoulders since Trey Lance, and Jimmy Garoppolo were injured and lost for the season.

In a really fascinating piece by SI’s Conor Orr, Purdy had to re-invent himself between his college team’s bowl loss to Clemson and his professional career with the 49ers, as the draft’s 262nd and final draft pick.

Purdy worked with QB guru Will Hewlett and physical therapist and clinical specialist Dr. Tom Gormely to fix his throwing motion and improve the speed of his passes. By the time of the draft, they added 5 mph to his passes.

Purdy played very well in his first NFL start last week against the Dolphins, completing 25-37 passes for 210 yards with 2 TDs and an INT. Was it a fluke? I wondered, but after watching the game and reading the story, especially about his cognitive ability, which rated him as a starting NFL QB, I think he can play. Check out Orr’s story.

Vance Joseph: The defensive coordinator of the Cardinals may not have been taking a dig at Matt Patricia, but he hit the nail on the head at what has been frustrating players and fans all season long.

“I see an offense that’s running the football well. It’s a very conservative pass game — a lot of screens, all kinds of screens. It’s how a defensive guy would call offensive plays, right? ‘Let’s not turn the ball over, let’s get 4 yards a play, and let’s try to burn clock,'” Joseph said.

“That’s what they’re doing, and that’s what he’s going to do on Monday night. He’s going to be patient. Maybe take a shot from time to time. But for the most part, it’s run game, it’s a quick game, and it’s screens.”

Hmm. It sounds like the game plan should be changed somewhat…right?

Patriots 4th & 2 Podcast: If you haven’t checked out our PatsFans.com podcast, “Patriots 4th & 2”, in a bit, please check it out. Russ, Derek, and I looked at the Vikings game. Next week, Russ will be unavailable, and our close friend Clare “Clazzy Clare” Cooper will join us.

Quick Matchup Notes against the Cardinals:

Unfortunately, I have been out of town and couldn’t post a “Razor’s Edge” matchup piece, but I will post a quick three keys to the game and some key matchups this week.

The Patriots have a winnable game this week on the road against Arizona, but it is going to take a lot of things going right this week. My keys to the game and key matchups against the Cardinals are as follows:

Contain Kyler Murray: Murray is athletic and a good scrambler outside the pocket, but unlike Josh Allen, he isn’t nearly as physical as a runner. If they can force him to throw from inside the pocket and put pressure on him, the battle is half won. Although his numbers from throwing outside the pocket are bad, most of those were without DeAndre Hopkins in the lineup, who is inherently dangerous. (More below)

Arizona QBs have been sacked just one time less than the Patriots, but for 35 yards more. This is a game where Matthew Judon, Josh Uche, and Deatrich Wise have to be factors in this game.

I would hope that Mack Wilson will see more snaps this week as a spy on Murray.

Begin Opening Up Deeper Passing Plays: Joseph’s comments speak one absolute truth. When opponents hope that you do the same things offensively, then they have no (zero) fear of your offense. That has to change…(are you listening Matty P?)

This is a week to begin using Tyquan Thornton for more than just a deep decoy…ditto for Nelson Agholor and Kendrick Bourne (if he’s active after his comments last week). If I was the offensive coordinator, Thornton would be my “X-Factor” this week. That’s why I have him as a being a big part of the offense this week.  We’ll see.

Time To Use an Old Patriots Defense Against Hopkins: DeAndre Hopkins is on a tear since returning to the lineup and he’ll have to be accounted for. We assume that with Jalen Mills out, they’ll use Jonathan Jones, but that is a size mismatch.

I’d use Jack Jones (size mismatch too), but give his safety help and use Jon Jones on the fast Hollywood Brown. The team has done this in the past often, and it will be worth a look this week.

They can’t allow Hopkins to dictate the game, and doubling him while putting Jones one-on-one with Brown should give them the best chance.

The slate of games for Week 14 and my predictions are straight up for this week. The Atlanta Falcons, Chicago Bears, Green Bay Packers, Indianapolis Colts, New Orleans Saints and Washington Commanders all have a Week 14 bye.

“Yeah, he’s been great. Yeah Jon’s – again, he’s played out there from time to time before, especially when we’ve matched up. But I mean he’s been great. Played for us in the kicking game. A couple phases in there from time to time depending upon what the roles are that week. But we’ve had pretty good depth inside with Myles [Bryant] and just overall. With J.C. [Jackson] not being here, it looked like that was our best combination with [Jalen] Mills and Jon, and then Jalen’s been out here a little bit. You know Jack’s [Jones] played for us all year. Marcus [Jones] has worked his way in there for some playing time as well. So, but yeah Jon’s been a good communicator. Would’ve been a solid guy for us on both defense and in the kicking game..”