2 months ago at 10:11 am ET
Follow @SteveB7SFG
Posted Under: Patriots Commentary 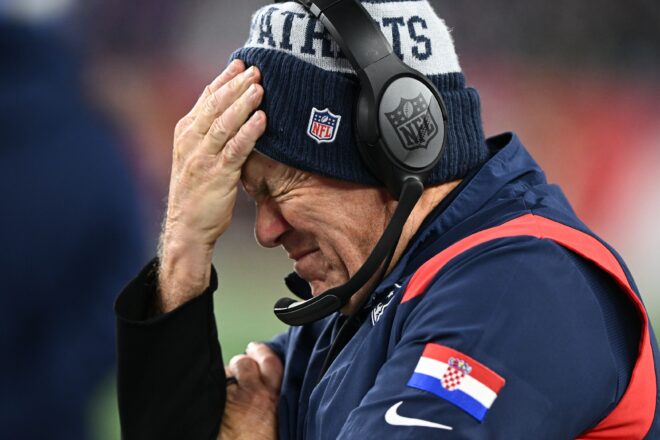 Two steps back. This one was U-G-L-Y with a capital UGH. If this game was the exam to see if the team can hang with the Buffalo Bills, then the Patriots must return for remedial training. In fact, they are not even close at this point. The 24-10 score is not indicative of how much the Bills absolutely dominated this game.

The Patriots made a big effort to take away the big play from Buffalo’s offense by playing a two-deep safety look and forcing Josh Allen to work his way down the field slowly. Allen did this to a tee by taking those short easy passes (in most cases); his receivers turned many of those into chunk yardage anyway.

The offense, offensive play calling, and time management were abysmal. The offensive line, which showed some signs of improvement last week, once again reverted to a colander, with leaks everywhere.

The Patriot Defense Still Can’t Compete With Buffalo: The defense once again struggled to contain the versatile and deep Buffalo offense. Allen spread the ball around, taking what the defense was giving, and the Bills moved the ball easily.

However, near the end of the first half, the defense seemed to have figured things out. The defense forced a punt and then generated a turnover with a strip sack. They forced another punt on Buffalo’s first possession of the second half. But the offense couldn’t put anything together, coupled with awful time management (more below), resulting in three-and-outs. This meant that an already gassed defense couldn’t get a breather.

Buffalo’s offensive line won the battle with New England’s, and they rushed for 132 yards, despite the fact that the Patriots did a pretty good job of limiting Allen’s scrambling. Allen rushed for just 20 yards on eight carries, but a big factor in that was the fact that, for the most part, he didn’t have to.

The secondary had another rough night, and this is one of those cases where the stats don’t tell the whole story. Allen passed for 223 yards, which would normally be a stat that would be looked on as a success. But those 223 yards seemed like a lot more. The secondary couldn’t keep up with Buffalo’s receivers, especially Stefon Diggs. Diggs caught seven passes on nine targets for 92 yards and a TD. After Justin Jefferson had a huge game last week, Jon Jones had another rough game trying to cover Diggs.

In the last two weeks, opponents’ star WRs have dominated the Patriots’ defense. That has to change…and quickly.

Frustration Beginning to Show: Mac Jones and Kendrick Bourne both voiced frustration last night. Jones came off the field and was unleashing F-bombs about the play design and calling. After the game, he tried to frame his comments that it was frustration in the heat of the moment, but this has gone on all season long, back to training camp. Bourne also voiced his frustration after the game while trying not to point fingers at anyone (the offensive line and play-caller Matt Patricia). He’s been in Patricia’s doghouse all season, so now isn’t the time for that.

Granted, the Patriots offensive line is a mess, but the play-calling has been so predictable that good teams will sniff out the same play over and over.

I know we’re beating a dead horse here, but the lack of creativity in the play-calling is a show-stopper. Rhamondre Stevenson bulled his way for 24 yards in the second half on three straight runs. It was a perfect time for a play-action pass. Instead, Patricia went to the well one too often, and Stevenson was dropped for a loss of four.

The clock management at the end of the first half was something to behold…and not in a good way. On a 2nd and 1 at the Bills 35 with 44 seconds left, they ran a draw to Stevenson for no gain. They wasted several seconds before they used their second time out and then called a QB sneak to Jones. But rather than calling two plays during the timeout, they called their third and final timeout. That’s Football 101 stuff, and the failure to do so was difficult to watch. And the failure there was on the coaching staff.

Marcus Jones Was a (Lone Bright) Spot: The rookie kick returner/cornerback can now add slot receiver to his repertoire. In the first quarter, the Patriots brought out Jones in the slot for his first offensive snap this season. Mac Jones threw a screen pass to Jones. His burst was evident once he made a cut to the outside; he was gone, blowing away any hopes of catching him. The 48-yard TD was a highlight reel catch and gave the Patriots a brief 7-3 lead.

While he has the speed to be a difference-maker, he is not a panacea to fix this offense, but I’m sure we’ll see more of him on the field.

Now the Patriots have the slimmest hopes of competing for the playoffs. The next two games (right now primetime games) against Arizona and Las Vegas are the must-win games of the season. If they don’t win both, they are out.