2 months ago at 1:05 am ET
Follow @bob_george
Posted Under: Patriots News 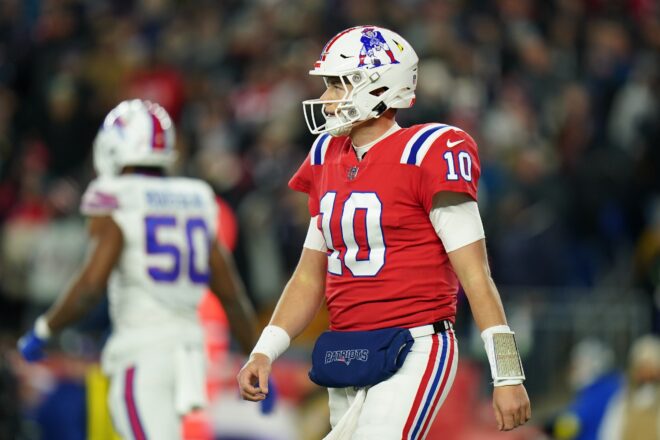 FOXBOROUGH – If the fact that the Patriots actually forced the Buffalo Bills into three punts is the only real positive of the game, you more or less have to shake your head and wonder how far this team has dropped off the playoff contender map.

The Bills came into Gillette Stadium on Thursday night and took it to the Patriots once again. While the final score of 24-10 does not suggest a complete and total annihilation like the postseason game last year, the game was not as close as the final score indicated. Buffalo should be concerned right now with Miami as far as winning the division this year. They certainly don’t need to worry about the Patriots.

You can put whatever spin on this game you wish. The Patriots didn’t compete. The Bills pounded the Patriots into submission with a superb ground game and stunning clock management. Josh Allen is a quarterback who figured out the Patriots and now the home towners have no answer for this big guy from Firebaugh, California. Von Miller was not in the lineup and the defense looked perhaps even better without him.

The bottom line is this: The worm has turned. It’s back to the early-mid 1990s again. The Bills did lose four straight Super Bowls, but not too many people give the Bills credit for being in four straight Super Bowls. The Bills are that good again. The Patriots dominated the Bills while Tom Brady was here, but those days are over. Jerry Sullivan of the Buffalo News can finally change his tone of postgame commentary articles.

You can say that the Patriots were outcoached. The Patriots did a hideous job of clock management at the end of the first half, which ended with a Nick Folk 48-yard field goal attempt that doinked off the crossbar, inches short. Allen had no pressure on him to speak of; he was sacked twice but for zero yards lost. The offensive game plan for the Bills was wonderful, featuring the run and time-consuming long drives.

In the end, it doesn’t matter. What if Folk made that field goal? The Pats lose 24-13. If somehow the Patriots had shut down Devin Singletary and James Cook, what’s to say that Allen carves up the Patriots with Stefon Diggs, Isaiah McKenzie and the running backs? If perhaps Matthew Judon had been able to beat his man and hurry Allen, the quarterback suddenly becomes Lamar Jackson.

You can go on and on. The Bills are simply a better team.

If you want to assign any “blame”, you might start with Bill Belichick the GM. This year’s successful draft has followed several years of bad drafts. The team went all in on free agents last year, but it hasn’t translated into Super Bowl contention. The team that Belichick has assembled simply does not have the material to compete at the previous high levels that everyone around here has become accustomed to.

Then you can look at Belichick the coach and question some of his coaching hires. It is still hard to figure that Belichick hired both Joe Judge and Matt Patricia to run the offense. These two men, who failed at head coaching gigs with the Giants and Lions respectively, are smart football men, but not in offensive football. As much praise as Patricia has received for being a brainiac, his forte is defense. Judge is the former longtime special teams coordinator at Fort Foxborough. This does not qualify them as competent offensive coaches. Mac Jones is suffering because of this coaching problem.

Right now, the Patriots are combining substandard coaching with a lack of material to be the current last place team in the AFC East. Yes, they are 6-6 and could still perhaps back into the playoffs as a seven seed if they are lucky. But right now, the Bills are a better team than the Patriots. If everything went well for the Patriots in this game tonight, the Bills still find a way to win.

The Bills outgained the Patriots, 355-242 in total yardage. The Bills had the ball for almost two-thirds of the entire game. They were 9 of 15 on third down, and were 3 for 3 in the red area.

Allen finished 22 of 33 passing for 223 yards, two touchdowns and a passer rating of 106. Diggs had 92 yards on seven catches. Cook led the Bills with 64 rushing yards on 14 carries.

Jones, meanwhile, finished 22 of 36 passing for 195 yards, one touchdown and a rating of 84.8. Marcus Jones, the hero from two weeks ago with his punt return against the Jets, gave the Patriots a brief 7-3 lead in the first quarter when he took a bubble screen pass in the left flat and scampered 48 yards for a touchdown. His 51 receiving yards led the Patriots, except that he is a defensive back. Rhamondre Stevenson led the Patriots with six catches, and also had 54 rushing yards on ten carries.

The Patriots are in the middle of four straight prime time games. They have a long haul before their next game, a week from Monday night in Glendale, Arizona against the Cardinals. Belichick will now have to turn his attention to Kyler Murray, who perhaps will morph into the second coming of Justin Fields. Their next game, in Las Vegas against the Raiders, may mercifully be flexed into the afternoon if NBC is smart and able to.

The Patriots should spend the rest of the season developing their team to win sometime down the road, if they can’t win right now. They just don’t have the horses like they used to have. The defense looked good against bad offenses. The offense needs better coaching. Right now, the Patriots are not an elite team, plain and simple.

If anyone can resurrect the Patriots, it is Belichick the coach. Having him still around is the best asset the Patriots have right now.

The defensive coordinator who happens to be is son is part of the problem as well. They only do well against bad offenses and get completely dominated when going against good offenses. Nepotism is a major problem at Gillette. As long as that remains the Patriots will continue to be a mediocre team for the remainder of the Belichick era.

Honestly not sure that Bill is/has put the Pats in the best position to compete with the elite of the NFL. Mr Kraft, time to put your team in a better place and change out the current coaching regime. I also believe like other sports analysts that its a combination of bad offensive and defensive plays and coaching is at the root of this teams poor performances. Throw back to 2000… 🙁 Yes, we have been spoiled will past trophies, but the way the Pats are playing I am actually glad that their playoff chances are sinking like the titanic.… Read more »