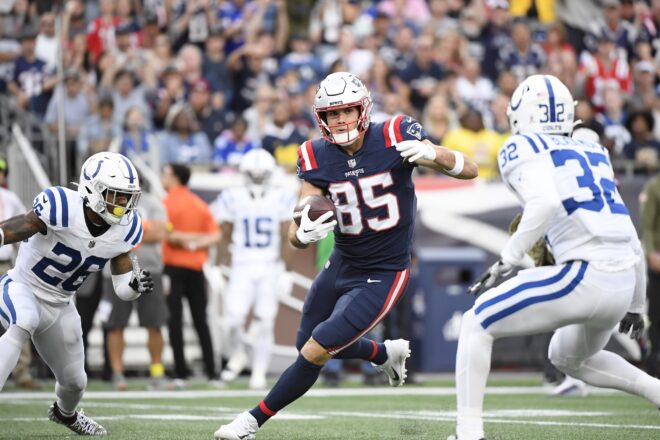 Some thoughts coming off of Sunday’s Patriots’ win over the Colts:

1) Mac Jones played a clean game on Sunday, finishing his first start of 2022 without an interception during the club’s 26-3 win over Indianapolis on a beautiful afternoon at Gillette Stadium.

Jones keeping the football out of harm’s way was big, as the Patriots did a good job controlling the game while outgaining the Colts 203yds to 121yds.  There was nothing flashy about Sunday’s effort, with the second-year quarterback’s performance being nothing more than just adequate.  Jones wasn’t terrible, but anyone hoping for a breakout game went home a little disappointed.

At the same time, Jones continues to play nervously and still seems hesitant, with things seemingly moving quickly for him.  That mentality makes sense given that he’s been under more pressure this season in terms of his protection and the playcalling also remains questionable (the tight-end screens are head-scratching).

The area where Jones was strong last season, and where Bailey Zappe also excelled, has been on a lot of the quick routes and throws that had seen them move the football so well.  Instead, they’re often in a shotgun or spread formation with deeper routes, which given the issues they continue to have up front, the time isn’t there for Jones to be able to hang in and deliver the football.  That was evident multiple times on Sunday, which has led to a lot of frustration on offense.

Simply said, Jones has been hit so much that it’s seemingly affecting his comfort level in evaluating what he’s seeing, which is an issue.  One of Jones’ strengths last season was hitting guys on intermediate throws in stride and letting them make plays.  He’s doing little of that this year.  Instead, those plays aren’t being called, and we’re seeing tight end screens or swing passes to running backs, oftentimes with little success, or they’re taking shots downfield.  It’s definitely puzzling, and here we are in Week 9, and Jones and Matt Patricia are clearly still not on the same page.

People calling for Zappe don’t realize that Zappe would also struggle in these situations.  Instead, when he’s been on the field, most of his throws have come with plays where he’s got one or two quick reads on something relatively short or intermediate on routes that are part of the play call.  Those plays don’t seem to exist for Jones, and the result has seen the Patriots struggle in the last two games.

That being said, Jones is going to have to take things by the horns and take some semblance of control. Right now, he’s playing scared, and he clearly doesn’t have confidence in what they’re running.  That makes sense given that he’s essentially trying to run a brand new offense with all new wrinkles while also having defenders closing in on him on a high percentage of their offensive plays.  It’s not allowing him to have much success, which also doesn’t reflect all that well on him.

While his job doesn’t appear to be in jeopardy since Bill Belichick seems to have hit the reset button and is willing to let things play out, what Jones has displayed these last two weeks isn’t nearly enough to solidify his role.  Obviously, turnovers definitely appear to be at the forefront of his mind, but it’s taken away the edge we saw from him for most of last season.

Needless to say, Jones needs to find some of that confidence and attitude that made him as good as he was at various points during his rookie season.  If he doesn’t, and this rollercoaster continues, he’s likely setting up a scenario where all bets will be off this offseason, which would be a massive disappointment given his promising rookie year. 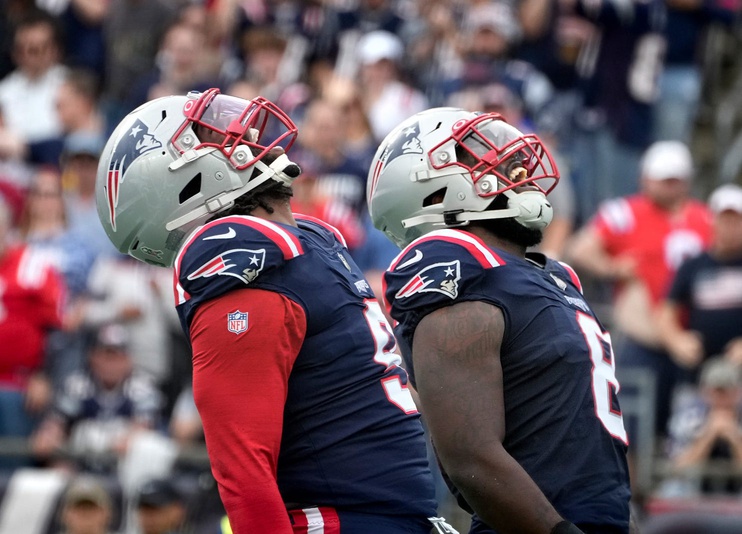 2) Sunday was a nice game for tight end Hunter Henry, who caught four passes for 50-yards, including a 30-yard reception on a 3rd-and-9 early in the fourth quarter that helped set up one of Nick Folk’s four field goals.  Henry hasn’t been utilized much to this point in 2022, and clearly, when Jones is able to get the football in his hands, good things tend to happen.

3) The same can be said for Jakobi Meyers, who had another productive game on Sunday.  Per usual, Meyers finished with a team-high 5 receptions for 42-yards and was one of Jones’ most reliable targets.  Unfortunately, he just isn’t getting much help from other players around him, outside of Rhamondre Stevenson, and hopefully, that will change coming off the bye in a couple of weeks.

4) It’s a little hard to believe that the Patriots paid Jonnu Smith what they paid him just to continually target him on tight-end screens, yet that was again the case again on Sunday.  They also don’t seem to use him much on intermediate throws, with most of his receptions coming relatively close to the line of scrimmage.  In fact, Smith’s longest catch of the day came on a play where Jones got him the football four yards behind the line of scrimmage, with the veteran taking it down the field for what turned out to be a 24-yard gain.  There have been plenty of discussions related to how we’ve seen the tight ends used, but Smith’s role is probably the most puzzling.

5) Kendrick Bourne had a rough game on Sunday, with the veteran’s role still being completely different from where he was a year ago.  Why he’s not more involved is baffling, and he got lucky on Sunday after losing the football on a fumble following one reception, with J.J. Taylor bailing him out with the recovery.  For a player who finished last season just 200-yards shy of 1,000 yards, the fact he’s fallen off so far is just bizarre.  Given that we’re more than halfway through the season, the likelihood of that changing doesn’t seem too promising.

6) So far, Jones and rookie wideout Tyquan Thornton haven’t quite been able to get on the same page.  Thornton caught just one pass on four targets for a 5-yard reception on Sunday, with Jones continuing to struggle when it comes to targeting him on deep passing plays.  It’s clear that when they do finally start connecting it will be electric given that Thronton has some amazing speed but to this point, it remains an issue.

7) Obviously Nick Folk’s value doesn’t need to be mentioned as it’s clearly understood.  He was terrific all afternoon Sunday as he connected on all four of his field goals, which accounted for the majority of the scoring on offense.  He’s just an unbelievable asset and Bill Belichick has already acknowledged multiple times this season that they’re incredibly fortunate to have him.  He hit kicks of 49, 43, 43, and 28-yards, all of which helped ultimately bury a Colts team that was never able to really make this one competitive.

8) Meanwhile, the guys on defense were incredible on Sunday led mostly by Matthew Judon, who had a massive performance.  Judon dominated all afternoon, finishing with three sacks and four quarterback hits as he made Colts QB Sam Ehlinger completely miserable and had him running for his life. A couple of his sacks came so quickly that Ehlinger never had a chance, with Judon breaking through mere seconds after the snap. Definitely an impressive outing and it may be one of the best performances we’ll see all season.

9) Josh Uche also had a breakout performance on Sunday.  After seeing little action defensively to this point in 2022, Uche was utilized quite a bit in the pass rush, and he joined Judon by finishing the afternoon with three sacks along with two quarterback hits.  He was absolutely terrific, and it played a big role in shutting down a Colts offense that was 0-of-14 on third down on Sunday, as well as 0-for-2 on fourth down.

10) You really can’t say enough about how terrific Jonathan Jones has been this season.  Between his play on defense, which has seen him be one of New England’s most consistent players, as well as his contributions on special teams, he’s just been outstanding.  He came up with a huge punt block on Sunday to set up New England’s lone offensive touchdown, and he also picked off Ehlinger deep in their own end and ran it into the end zone for a touchdown.  He’s a guy who just doesn’t get enough credit, and he certainly played a massive role in Sunday’s win.  Belichick has praised him quite a bit as of late, and he delivered in a big way in a game that finally got the Patriots back above .500 and helped them keep pace in a Division where both the Jets and Dolphins won on Sunday.

READ NEXT:
MORSE: Observations as Patriots’ Defense Smothers the Colts to Get Above .500 Mark
Posted Under: 2022 Patriots Season
Tags: Patriots vs Colts