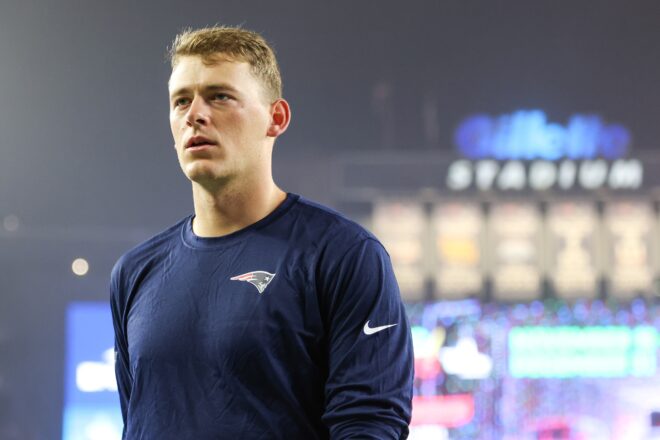 While New England Patriots quarterback Mac Jones will probably get booed the next time he takes the field, at least it won’t be by the home fans.

According to ESPN’s Field Yates, Jones took 90% of the first-team reps at practice on Wednesday and is expected to get the starting nod at MetLife stadium when the Patriots face the Jets on Sunday.

Jone is obviously coming off a tough appearance on Monday night where his health was in doubt heading into the game.  Bill Belichick took a risk in starting him, and the result ended up being a disaster.  Jones was under duress for most of the time he was out there and had to make several plays with his legs against a tough Bears defense, which included a sack on one series where Jones was forced to move to his left on that bad ankle.

He ended up getting pulled from the contest after throwing an ill-advised interception during the team’s third offensive series, which saw Belichick then replace him with backup, Bailey Zappe.

Zappe finished the contest and initially led the team to two quick scoring drives to get them back in the game.  However, he struggled from there as the club was shut out in the second half, with Zappe throwing back-to-back interceptions on consecutive drives in the fourth quarter that thwarted any chance at a comeback.

The fact Jones is starting is likely a surprise to the second-year quarterback, who sounded uncertain about his status moving forward immediately after Monday night’s loss.

“I guess when Sunday, we’ll know,” said Jones at the time when asked about his status.  “Like I said, I want to become a better player and prepare like I always prepare and put the hours in every day, my schedule doesn’t change.  I’m just going to continue to do that, and hopefully, the results will take care of themselves.”

Hopefully, after the way Monday night went, he’s able to turn things around this week.