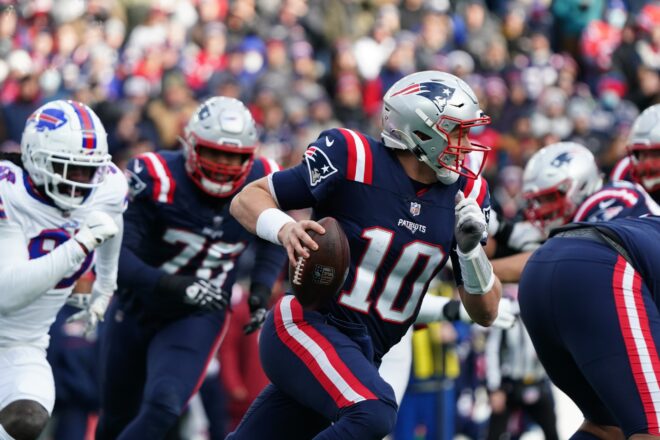 While New England Patriots head coach Bill Belichick spent most of this week downplaying who will be starting on Monday night against Chicago, it doesn’t change the fact the Bears seem to already have a plan in place against Mac Jones.

With signs this week indicating that it will potentially be Jones under center instead of Bailey Zappe, that’s who the Bears seem to believe they’ll be facing.  In fact, Chicago defensive lineman Justin Jones spent some time this week making a variety of unwise comments, including letting everyone know about one apparent weakness they believe New England’s second-year signal-caller has.

“He doesn’t like anyone next to his feet,” Jones said of the Patriots QB via Chris Mason of MassLive.com. “He throws off of his back foot whenever there is pressure. If we can get some confusion going on, then when he gets confused he throws the game away, in my opinion. If he gets in a rhythm then he can hurt us and we have to give him that respect in that aspect. He does have a kryptonite we are going to expose.”

Considering the fact Jones is coming off of a fairly severe left ankle injury, there’s probably little doubt that the Bears plan to make him move around and get him off his spot.  That tends to be the plan of most teams against young quarterbacks, so this doesn’t exactly come as a surprise.

However, the Bears have one of the worst run defenses in the league, coming in at 29th in the NFL while allowing a staggering 164.8 rushing yards per contest.  Running the ball will likely be a focus, with Jones hopefully running a similar number of play-action-passes, which have been both a successful part of his game and have certainly been effective for Zappe.

One bright spot since Jones last saw the field, is that the Patriots have solidified things a bit on their offensive line after having recently brought back Marcus Cannon, who has been seeing time on the right side.

That’s worked in New England’s favor, given Isaiah Wynn’s struggles.  After moving to right tackle in preseason, it’s been a less-than-ideal year so far for the former first-round pick.  He leads the team in penalties and has also had a hard time keeping defenders out of the backfield.

Cannon’s arrival has seen an improvement in that area, which should hopefully help keep Jones a little more out of harm’s way than he had been during the first few weeks of the season.

Should they get pressure on him, it’s probably safe to say we can expect the Bears to come after Jones from that side or up the middle and force him to move to his left, which would see him have to move around on that ankle.

Jones finally spoke briefly to the media yesterday for the first time in nearly a month and said that he’s feeling “pretty good” heading into what will hopefully be his first start since getting hurt against the Ravens.

“Yeah, I think it feels pretty good,” said Jones of his ankle via the Boston Herald.  “Just trying to work through all the stuff, being able to play in an NFL football game. I want to be able to go out there and help the team. Once I’m there, I’m there. So, I’m definitely making progress. We’ve done a good job with the treatment.”

Jones was limited during his time in practice this week and was officially listed as “Questionable” by the team on the injury report the Patriots released on Saturday.