4 months ago at 11:12 am ET
Follow @IanLogue
Posted Under: Patriots News 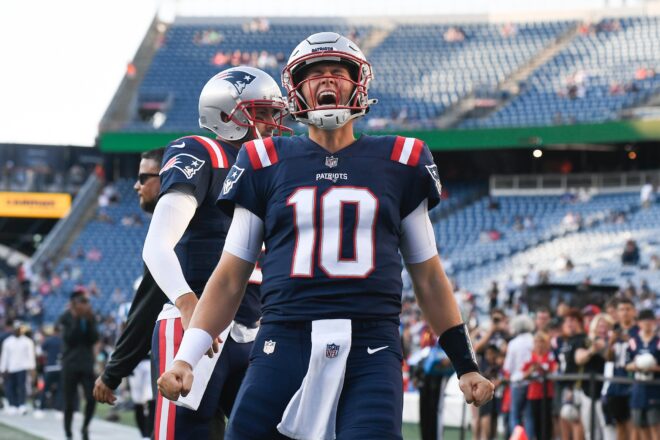 While ESPN may have released their promo graphic featuring Bailey Zappe and Matthew Judon leading up to the New England Patriots’ battle against the Chicago Bears on Monday Night Football, it looks like there may potentially be a change coming to one of those names.

Reiss also added that the only remaining hurdle will be getting cleared in practice, which will also likely see Bill Belichick make an evaluation based on how well he performs over the next few days, along with his mobility.  The team is scheduled to hold their first practice of the week on Thursday.

This is a key week for the Patriots, who are looking to get back above .500 after rookie backup quarterback Bailey Zappe has led the club to back-to-back wins against both Detroit and Cleveland.

Zappe has played remarkably well for a first-year player, stepping during the club’s match-up against the Packers three weeks ago after Brian Hoyer went down early in the game with a concussion, and nearly pulled off the upset against Aaron Rodgers before the Patriots eventually fell 27-24 in overtime.

However, as a starter, Zappe’s led the team to two convincing wins in recent weeks and has completed 51-of-70 (72.9%) for 596-yards with 4 touchdowns along with one interception.

For Jones, this is a chance at a little redemption after a rough start that saw him throw five interceptions in just three games, including a three-interception performance in his last start in a loss to Baltimore.

Four of those five picks have come on throws to DeVante Parker, with two coming in their loss to the Ravens.  In that game, the Patriots targeted him an astonishing 10 times, with the receiver catching just five of them, albeit for big gains as he put up a career-high 156-yards.

Those 10 targets were more than double that of the other seven players targeted that day, with Bourne and Rhamondre Stevenson each finishing with the next-highest total at 5 apiece.

The final turnover came on a throw to Bourne as the club, trailing 37-26, was trying to get back in the game late in the fourth quarter.

Unfortunately, Jones got hit as he was releasing the football and the ball was intercepted, with Calais Campbell ending up on top of Jones’s leg, which resulted in his current injury.

That game feels like forever ago, and the fact Jones is even potentially ready for a return is pretty amazing given how bad things looked when he was carried down the stairs to the locker room after it happened.

For now, the ball appears to be in Belichick’s court, an it should be interesting to see if he stays with Zappe, or hands things back to Jones ahead of this match-up.