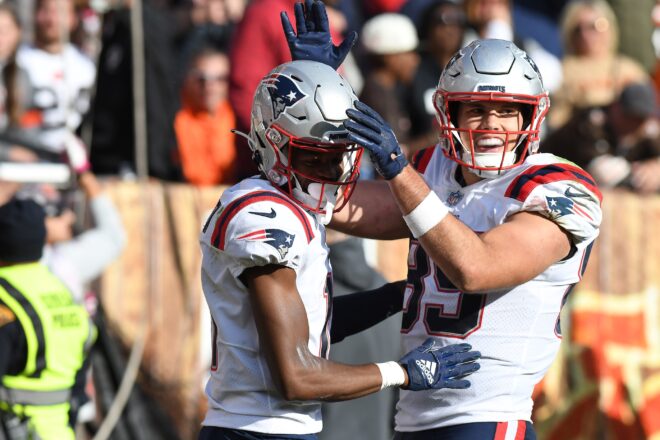 The Patriots return home for a Monday Night Football matchup against the Bears in Gillette Stadium. With a chance to go over .500 against a struggling Chicago team, this is another opportunity to build on the momentum they’ve generated over the past two weeks.

The Patriots will honor HOFer Richard Seymour at halftime in a ceremony where he will receive his Pro Football Hall of Fame ring.

This week’s game will be broadcast by ESPN. Joe Buck will handle play-by-play duties with Troy Aikman as the color analysts. Lisa Salters will provide analysis from the sidelines. The game will also be aired on the Patriots flagship radio station, 98.5 The Sports Hub, with Bob Socci and Scott Zolak on the call, produced by Marc Capello.

The Patriots (3-3) are coming off a big 38-15 win on the road at Cleveland. The defense shut down the Browns’ running game, holding them to just 70 yards after they’d been averaging more than 192. The Browns didn’t score a TD until the 4th quarter.

The offense, led by Bailey Zappe, who passed for more than 300 yards and two TDs, had their highest output of the season. Rhamondre Stevenson led the rushing attack with 76 yards and two TDs.

The Bears (2-4) lost to the Washington Commanders 12-7 last week, also in prime time. Chicago is 0-2 in prime time this season, and the loss against Washington was particularly galling as the red zone offense struggled, and a fumble made things worse.

Despite Damien Harris’s injury, the Patriots’ running game continues to churn. They are currently the 10th-best rushing team in the league, averaging 131.3 yards per game. Rhamondre Stevenson continues to grow each week, and he has proved that he can carry the load in Harris’ absence.

The Patriots got rookies Kevin Harris and Pierre Strong some play last week, and as they gain more game experience could see them getting more snaps.

The Bears’ run defense has been the Achilles Heel on the defensive side. Opponents are running all over them, averaging 163 yards per game (29th in the league) and 4.8 yards per rush (24th). They’re getting pushed around at the point of attack, and this week, the Patriots’ OL should be able to assert their will in this matchup.

The Patriots will start off running right at the Chicago defense and their best player, linebacker Roquan Smith, and then move to hit them on the perimeter. Smith has outstanding sideline-to-sideline speed but is undersized and can get washed out in the power running scheme. I expect Stevenson to have another solid game this week. After Tyquan Thornton scored on a Jet Sweep last week, showcasing his speed, look for the team to try that play again on Monday night.

We’ll be wondering, probably until game time if Mac Jones returns to the lineup from his ankle injury, or will it be another week off in an attempt for him to be completely healthy? It is certainly a nice problem to have, as both Jones and Bailey Zappe can play.

Zappe was excellent last week in Cleveland and delivered several outstanding plays to spark the offense to a big win. The two things that stand out for such a young player are his poise and vision at seeing the field, which is rare for a rookie.

The Bears have the fourth-best pass defense in the league, allowing just 178.7 yards per game, but it is probably fair to question whether those numbers are a testament to the Bears’ play in the secondary or just that teams are sticking to the run.

The Bears only have 11 sacks on the season, and Robert Quinn has notched only one sack on the season. He’s also been the subject of trade rumors. The secondary has former Alabama safety Eddie Jackson who is a ball-hawk and either Zappe or Jones will have to be aware of where he is.

The Patriots will attempt to use play-action passing this week. One player to watch is rookie WR Tyquan Thornton. In just his second game last week, Thornton had seven touches (3 carries, 4 catches) in just 40 snaps and a pair of touchdowns.

Next up is the Chicago offense:

The Patriots’ run defense has been excellent the past two weeks, especially against Cleveland last week holding the Browns to more than 122 yards off of their season average. Cleveland was able to generate just 70 yards on the ground.

The front seven have really stepped up and played excellent team defense, filling the gaps, holding their ground, and allowing the linebackers to clean up. This week, they’ll need a similar effort against a very good Chicago running game.

The Bears have the #2 running game in the NFL, averaging 170.8 yards per game as well as an excellent 5.2 yards per rush. The Bears have weapons in the backfield with David Montgomery as the lead back, with the explosive Khalil Herbert as the 1b to Montgomery’s 1a. Justin Fields is also a very effective runner.

Look for the Patriots to get Chicago into passing situations on third downs. They’ll probably try to force the issue by bringing the linebackers up to stop the run.

The Bears have yet to show much trust in Fields throwing the ball; he’s only thrown more than 25 passes once this year. That will severely limit a young QB’s development, so it is easy to make the argument that the coaching staff isn’t putting Fields in a position to succeed.

Part of the issue is protection; the Chicago OL has struggled to protect the QB. Fields has been sacked a whopping 23 times when Fields has attempted just 115 passes. That is unacceptable when your QB is sacked once every five dropbacks. Part of the issue is Fields himself. Several of the sacks directly result from Fields holding the ball too long.

Fields doesn’t have great weapons to throw to either. Darnell Mooney is his go-to guy and has 17 catches for 241 yards. TE Cole Kmet and Montgomery out of the backfield each have 10 receptions.  Former Patriot N’Keal Harry is expected to make his first appearance in a Bears uniform this week.

The Patriots’ pass defense will probably throw some wrinkles at Fields, and show him some looks he hasn’t seen before. This is a matchup the Patriots should win, especially with the pass rush getting home more this season.  Look for the secondary to force a turnover or two on Monday.

Nick Folk has money inside of 50 yards (with last week’s miss breaking a streak of 64 straight). Jake Bailey is rounding into form and put three punts inside the 20 last week.

The Bears have Cairo Santos, who is 7-7 on FG attempts this year, including three from 50+ yards. Punter Trenton Gill is averaging an outstanding 49 yards per punt.

Marcus Jones gives the Patriots the edge in the return department, while Velus Jones has had a muffed punt in two games in the last three. Chicago may decide to switch things up and put Dante Pettis back there.

This is a game that the Patriots should win; they have advantages in many positions across the board, especially in coaching. Matt Eberfus is still figuring things out as the new head coach, and Bill Belichick is…well Belichick.

Start Quickly And Put the Bears In a Bind — The Bears aren’t a team built for playing from behind. They’re only throwing the ball 23 times per game. They don’t have dynamic playmakers in the passing game. And if Belichick forces them to pass the ball down the field slowly, they will be in a no-win situation.

The first key is to start fast, score some points offensively and force the Bears into a passing game.

Like last week, expect to see some bigger packages with Ja’Whaun Bentley and Jahlani Tavai inside in run support; Kyle Dugger and Adrian Phillips should be big parts of the defensive game plan.

Run the Ball, Stretch the Field With Play Action — Expect the Bears to load the box like Cleveland did last week. The Patriots will still attempt to run the ball and assert their will, with Stevenson and controlling the clock while wearing down the defense.

Look for the Patriots to stretch the field more this week. Tyquan Thornton, as we saw last week had a lot of touches and is a threat with his speed. Play-action passing will be key here if the Patriots establish the running game.

I think this game should see the Patriots win rather easily. The Bears are struggling badly so far this year, and Bill Belichick usually does well against teams that are one-dimensional offensively.