7 years ago at 9:04 am ET
Follow @IanLogue
Posted Under: Daily Patriots Rundown 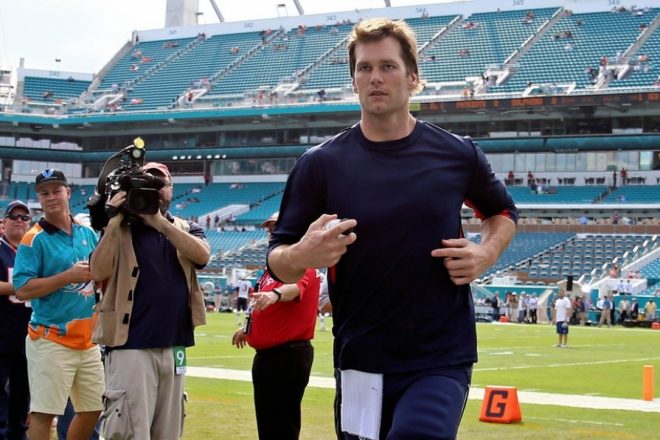 An abbreviated version this morning due to time constraints, but here are this morning’s top stories:

Brady Requests Rehearing – No surprise, but Patriots quarterback Tom Brady will indeed appeal Monday for a second hearing by the 2nd U.S. Circuit Court of Appeals as he continues his battle against the NFL to try and overturn his 4-game suspension.

NFL Players Association attorney Theodore B. Olson spoke with ABC News on Monday morning in an interview aired on “Good Morning America” that the plan will be to move forward with filing the appeal on Monday.

“The facts here are so drastic and so apparent that the court should rehear it,” said Olson.

“Our two primary arguments are that the commissioner in the first place conducted an investigation and then the commissioner imposed discipline. Then the commissioner appointed himself as an appellate judge or an arbitrator and then decided something new in the appellate process, abandoning the grounds that were the original basis for the supposed discipline,” Olson told ABC News via Mike Reiss of ESPN.com. “That’s No. 1, and an appellate judge is supposed to look at the record and make a decision on the basis of what happened before. He departed from what happened before. Secondly he ignored important provisions of the CBA about discipline that might be imposed for equipment violations. He departed from that completely and went off the track.”

His lawyers will appeal “en banc”, asking the entire panel of the 2nd U.S. Circuit Court of Appeals to participate in the hearing but it will take 7 of the 13 judges to agree to hear it before a hearing is held.  If it isn’t heard, the next step would be for Brady to attempt to take his case to the U.S. Supreme Court.

Roger Goodell has recently been seen repeatedly and in television interviews on what’s been essentially a victory tour after getting Brady’s suspension reinstated, saying that decision was “the right decision.”

“We think the decision was the right decision and it should have been the decision last year from the district court, and that’s what the appellate court said. They reaffirmed our authority and the underlying facts of the case, so we think we came out in the right place,” Goodell said Wednesday after a youth football clinic prior to the NFL draft. “We’re not planning any more steps. We’d like to put the matter behind us and move forward.”

The only problem is, Brady isn’t ready to quit just yet.  Now we’ll see if the Patriots quarterback can turn the tables yet again as this saga continues.

Looking for a shot – Former UMASS Dartmouth player Abiola Aborishade is trying to get a tryout with the Patriots, and has spent every day out on Route One with a sign that says, “Talented Hard Working Athlete Looking For a Chance to Prove Myself”, with “Receiver (Slot and Wide), Special Teams” and “Won’t Disappoint” written on the sign.

He’s been out there every morning from 5:45am until 7, when he then leaves for his job up the road at Enterprise Rent-A-Car.  Then he comes back after his shift ends, all the while hoping to just get an opportunity.

“I honestly was thinking three things could happen from this. The first thing is that they see me so often that they get sick and tired of me,” Aborishade told MassLive.com. “So they almost give up, give into it, because I’m not giving in. So they give in and they say, ‘OK, let’s see what this kid can do.’ The second thing is the people who drive around here, who work around here see me so often that they almost say, ‘hey, we want to see what he can do.  And the third thing is they just leave me out here.”

According to MassLive.com, Aborishade got the idea after seeing a viral Instagram post of former NFL receiver Joe Anderson standing outside of NRG Stadium in Houston holding a cardboard poster that read, “Not homeless…but STARVING for success. Will run routes 4 food.” Anderson eventually signed with the Jets practice squad.

He also told the website that a few players have stopped to talk to him, including Jordan Richards, Rob Ninkovich and Malcolm Butler.  Butler posted a photo of Aborishade to his Facebook page, writing in the caption, “This is the attitude you must have if you really want something…#NEVERGIVEUP.”

Give Arborishade credit for being persistent.  Now we’ll have to wait and see if he does, in fact, get his shot.

Brissett Remains Unsigned – Mike Reiss of ESPN talked about the fact that 3rd round pick Jacoby Brissett remains the only unsigned selection, and considering that the deals structured by the players are more or less set under the new CBA, Reiss tried to shed some light as to what the hold-up might be.

“While nearly 75 percent of this year’s draft class is already under contract, one thing I learned when looking into Brissett’s situation is that the third round has only produced 15 signings among 35 picks. Why so many third-rounders who have yet to sign? One NFL salary cap man relayed that third-round negotiations have proven to be more challenging than other rounds in recent years. The reason is that first- and second-round picks can receive a maximum of 25 percent allocation of a team’s rookie salary cap, but because the third round doesn’t max out at 25 percent, there is often debate over what the correct percentage should be. That has created a situation where the third round has been the spot in the draft where some agents are pushing for more annually, such as the inclusion of workout bonuses in the deals.”

OTAs Set to Begin – Things should be ramping up at Gillette Stadium as the Patriots will begin scheduling voluntary and organized team activities, with New England permitted to schedule as many as 10 organized sessions along with their manditory minicamp.

They’ll reportedly hold three this week, including one to day.  We’ll be able to begin getting some reports on Thursday, which is the only one this week open to the media.  The players won’t be in pads but it will at least be an opportunity to get some news about some of the new faces who will hopefully bring some success this season.