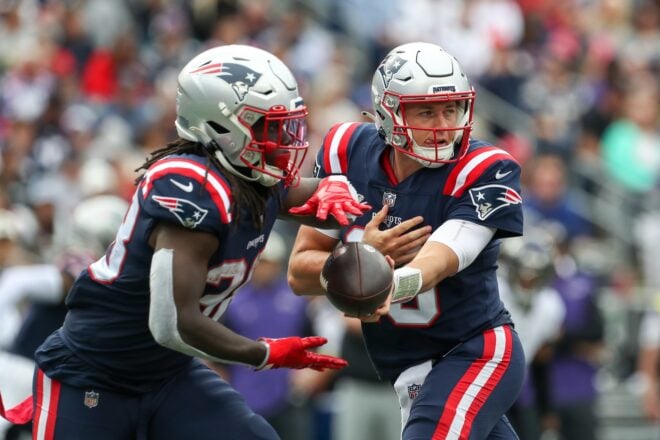 Boston Globe NFL reporter Ben Volin got himself in all kinds of hot water on Wednesday after appearing on WEEI’s The Greg Hill Show while trying to continue on the narrative he put out Tuesday night on NBC Sports Boston where he believed second-year quarterback Mac Jones “needed to be humbled“, which obviously made a lot of noise.

Unfortunately, not only did he double down on that claim during his interview Wednesday, but he made a pretty surprising claim that others “in the building” shared his view and based that theory off of an apparent DM he received.

However, that DM came from someone on Twitter looking to submarine him, and unfortunately, Volin fell for it.

The former Palm Beach Post reporter called in from Penn Station in New York City Wednesday morning as he was getting ready to return to Boston having been in New York to cover the NFL owners’ meeting.  After the interview, the revelation of his miscue came not even an hour later when Barstool Sports broke the story after the person behind the DM revealed what had happened.

As a result, Volin’s account on Twitter remained silent for the rest of the day, with Volin finally jumping back on this morning where he issued an apology.

“Hey everybody, just want to acknowledge that I made a mistake Wednesday on @WEEI,” Tweeted Volin.  “I should have not spoken of the DM without vetting it first. No excuses, It won’t happen again. I appreciate the feedback and comments I’ve received.”

The apology comes one day removed from when radio host, Greg Hill, who won a Marconi Award on Wednesday night, initially questioned him on it to begin with.

“So somebody, not just a random, somebody reached out and said that Mac has an attitude problem and everybody knows it?” asked Hill.  “Sounds like nonsense to me, honestly.”

Volin replied, “Why is that nonsense?”

“Why didn’t we hear a single thing about it last season?” asked Hill.

“Because he wasn’t a Pro Bowler then,” said co-host and former Patriots tight end, Jermaine Wiggins.

“Yeah, and he was just like a rookie kid and everyone was loving him up,” said Volin. “But I think a lot of the issues have cropped up this offseason. I think he’s been wondering why he was given the defensive coach and the special teams coordinator as his coach and the offensive scheme, like, that wasn’t working. Just some of the body language stuff … I’m not saying like Mac didn’t put in the work or anything. I’m just saying, it’s good to be humbled.”

“It’s good for a kid who went to a Tony prep school, and then Alabama and won the National Championship, and came to New England and went 10-7, everyone’s calling him the greatest thing since sliced bread, it’s probably O.K. for him to be humbled a little bit and to have to work to get back to his starting job.”

“People need to chill out over this whole thing. There’s definitely a lot of smoke there to the Mac Jones and him not vibing with the coaching staff.”

Come to find out, it sounds like there may not have been quite as much smoke as Volin thought after all.

It’s unfortunate that it happened given that, aside from his contrarian takes, he had done a decent job with his NFL coverage, and his Sunday Football Notes tend to have some interesting bits of information in them.

But after this, it will definitely hurt his credibility moving forward.  However, given his otherwise clean history, it sounds like the Globe opted not to hit him with any type of suspension or additional consequences, or at least none that have been reported.

The bad news is he’ll likely be taking heat from readers on this for a long, long time.  That being said, if John Tomase can survive the bombshell report he dropped in 2008 ahead of what was the biggest game in both franchise and NFL history for the Patriots (which obviously turned out to be false), Volin should be able to survive this.