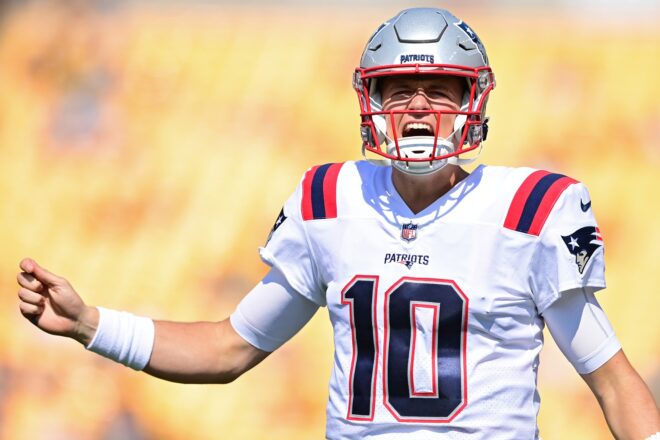 With New England Patriots QB Mac Jones approaching nearly a month since being sidelined after suffering an ankle injury back on September 25th against the Ravens in Week 3, many fans have been split on New England’s current QB situation thanks to teammate Bailey Zappe’s recent success in his absence.

But while much of that discussion has been debating their differences on the field, Boston Globe reporter Ben Volin has apparently decided to take a different approach.

During a recent television appearance on NBC Sports Boston, Volin claims that what’s transpired in recent weeks is a good thing, largely because he believes Jones was getting a little bit too full of himself.

“Making the Pro Bowl and making the NFL Top 100?  Worst thing to happen to Mac Jones last year,” said Volin.  “Because it was a sign that he made it, you know?  And he’s becoming a star and he’s doing the griddy and everyone’s eating it up on social media.  Sorry, Mac Jones, you’re a rookie.  Your team wanted nothing to do with you in that windy game against Buffalo, the team fell apart at the end of last year.  I’m telling you, making the Pro Bowl, I think, pumped his head up a lot, gave him an impression that he’s a lot more than what he really was.  I think it was a bad, bad deal for Mac Jones.”

Anyone who has followed Jones for any length of time knows he’s confident but very rarely do you hear anything from him beyond that.  He’s typically soft-spoken in interviews, often praising the guys around him while talking more about the things he needs to work on compared to what he does well.

As a teammate and a captain, guys in the locker room have talked about him as a person and a leader on quite a few occasions while also pointing out his work ethic, which typically sees him as one of the first people in the building as well as one of the last to leave.

By all accounts, Jones also remained in New England this past offseason and was fairly relentless in preparing for the season.  He was seen frequently at Gillette Stadium and held multiple throwing sessions throughout the spring with various groups of receivers, putting in what’s arguably been one of the most arduous offseason bodies of work by a player in recent memory.

Still, Volin believes Jones came into this season with an ego and he feels this injury, along with how well Zappe has stepped in during his absence, should hopefully knock Jones back down a peg, which he feels will be good for him.

“I think it certainly inflated the ego, absolutely.  Alabama kid, he comes in, he makes the playoffs, everyone’s talking about he’s better than Trevor Lawrence and Oh, he’s making the Pro Bowl now, everyone’s loving him up.  The kid needed to be humbled and I think that’s a good thing for him right now.”

The comments feel fairly off base, but it shouldn’t be a surprise.  The former Palm Beach Post writer came into Boston with little love for the team he’s covering and that’s been apparent since he’s been here.  However, as we know, contrarian takes tend to be better ratings-wise than anything else, so Volin’s schtick likely accomplished exactly what he was looking for, which was a little extra attention.

That seems a little ironic given the take he’s presenting about Jones’s own ego, but “it is what it is.”

"Making the Pro Bowl [last year] pumped his head up a lot… this kid needed to be humbled."@BenVolin explains why Bailey Zappe's recent success is good for Mac Jones 👀 pic.twitter.com/7ivor4TCWI

WOW! WOW! WOW! WOW! Effen speechless. I know Volin has an agenda but this is way over the top even for him. This very well may turn the few who follow him stop. It certainly should. TY Ian for posting your take.

Yeah, it’s pretty insane. I don’t know why he went there since anyone who followed Jones’ offseason knows he didn’t disappear and go home. It was pretty common knowledge that he put a big investment into himself this offseason and stuck around working hard to make sure he was ready heading into year two. It was just a real bad – and frankly, unfair – take on Volin’s part. And if I’m Jones, I’m probably remembering it for the next time they’re in a press conference and he asks a question.

Volin has a point. Wouldn’t all of the success and attention that Mac got in his first year make your head swell if it were you?

I wouldn’t necessarily say that. I would say that maybe there’s some validation for all the work he put in, but in terms of having an ego, etc., I think that’s a reach.

As I wrote, I think if Mac had gone home and “worked out on his own” and stayed away, maybe I’d think that. But it was fairly well documented that he was in town all offseason working hard and preparing for the season. That and based on various interviews, things he’s said, etc., that’s not the impression I get from him.