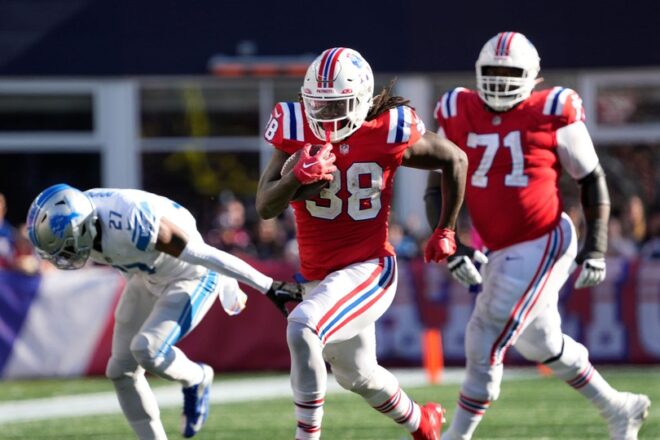 Patriots running back Rhamondre Stevenson has certainly garnered quite a bit of praise from head coach Bill Belichick recently given how he’s played in recent weeks.  However, looking at the numbers, what he’s done has really been extremely impressive.

So far, with Damien Harris heading into what will potentially be his final season with the team, the Patriots have increased Stevenson’s workload so far this season and it worked out given that it likely prepared him for having to shoulder an even bigger role Sunday after Harris went down with a hamstring injury.

He responded in a big way with a 25 carry, 161-yard performance that included a second half where he rushed for 92-yards on 17 carries, including four carries of 10+ yards with one that went for over 20.

Looking closer, with a bigger role this season, he’s been even more impressive than Harris was over this same span last year.  He’s carried 68 times compared to the 63 Harris had at this time last year, but the numbers are vastly different.

Comparing the two backs, Harris had 63 carries for 230-yards (3.7 avg) through five games last year, while Stevenson has 68 carries for 372-yards (5.5 avg) over that same span this season.

Looking at their totals by rushing yards (see above), it’s pretty staggering as well:

This season, the totals are still significantly different.  Harris has rushed for over five yards 14 times, which is still 10 behind Stevenson’s 24.  Harris also has just 4 carries of 10+ yards, while Stevenson has 10.

As a result, Stevenson’s gotten off to a strong start this year.  Belichick credited him recently for all the hard work he put in this offseason, which Belichick said that the running back’s success so far “is the result of his hard work and dedication to doing well in those situations, that it just didn’t happen.”

The Patriots are fortunate that they still have arguably the best running back duo in the NFL.  Make no mistake, Harris has been outstanding, and he’s also turned into a fantastic addition having previously emerged as the starter over Sony Michel.

Still, as Harris continues through what could be his final season in New England, it’s at least encouraging to know that if he moves on after 2022, the Patriots appear fortunate enough to have a guy who so far has proven he’s been up for potentially taking on that lead role given how he’s played.

That workload will likely continue after Tom Pelissero reported on Tuesday that Harris is expected to miss multiple games due to his hamstring injury, which could also see an increased role by rookie Pierre Strong Jr. alongside Stevenson in the coming weeks.