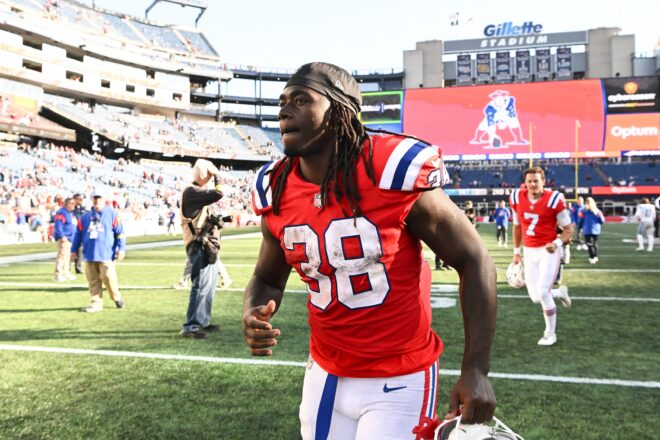 It’s not often that you hear a lot of praise about a player from Bill Belichick, but the New England Patriots head coach took quite a bit of time to praise running back Rhamondre Stevenson on Monday.

During his weekly appearance on WEEI’s The Greg Hill Show, Belichick spoke at length about the veteran back, who obviously stepped up in a big way on Sunday during the team’s 29-0 shutout win over Detroit.

Stevenson finished with a career-high 161-yards on 25 carries, which played a key role in helping rookie Bailey Zappe and the offense run a balanced attack against a Lions team that had a tough time defending them.

When asked about Stevenson’s performance and the confidence the coaches and the team has in him, Belichick talked about how much he’s improved in just one year, which is what he’s been most impressed with.

“As much confidence as you could possibly have, that’s how much we have,” said Belichick.  “I think everybody’s … every player on the team, every coach on the team has total confidence in Rhamondre to do whatever it is we need him to do, catch the ball, pick up the blitz, run the ball, inside, outside, break tackles, short yardage, make explosive plays. He’s improved so much in these, whatever it’s been … 20 games, whatever … since he’s been in the league. He’s really … his ball security is good, his running skills are good, his blitz pick-up is good, his pass routes are good. But they’ve all improved a lot.”

What was really the most remarkable part of Stevenson’s performance on Sunday is unlike previous games this season, the former standout from Oklahoma was forced to shoulder more of the workload after the team lost Damien Harris relatively early in the contest due to a hamstring injury.

The former 4th round pick carried the football 8 times for 69-yards in the first half, which was highlighted by a 49-yard run that helped set up New England’s second field goal of the afternoon.  But in the second half, his workload more than doubled after he carried 17 times for 92-yards yet he didn’t miss a beat.

Belichick credited Stevenson’s work behind the scenes for his improvement, which he said everyone within the organization has definitely noticed.

“This kid’s really worked hard at making himself a good player. He’s a talented player but he’s put in a lot of extra work and understands what he needs to do to be effective in all those situations and has worked hard to perfect his techniques and craft to do that and I give him a ton of credit. This kid’s come a long way from the blitz pick-up in Miami last year in the opener, ball security in the early part of the season last year, route running.”

“I mean, all those things, he’s worked hard at and you can see the results and I think everybody involved in this organization that’s observed that, recognizes that a lot of his production and performance on the field is the result of his hard work and dedication to doing well in those situations, that it just didn’t happen. He’s worked at it and improved it. So everybody, I’m sure, has a ton of confidence and respect for him.”

If Harris isn’t able to go next Sunday, the Patriots will likely lean on Stevenson again on the road against the Browns, who are up next for the Patriots.

By: Russ Goldman
In this episode, we look back at the Patriots loss to the Bills, Later on, we preview the upcoming game against the Cardinals.
17 hours ago