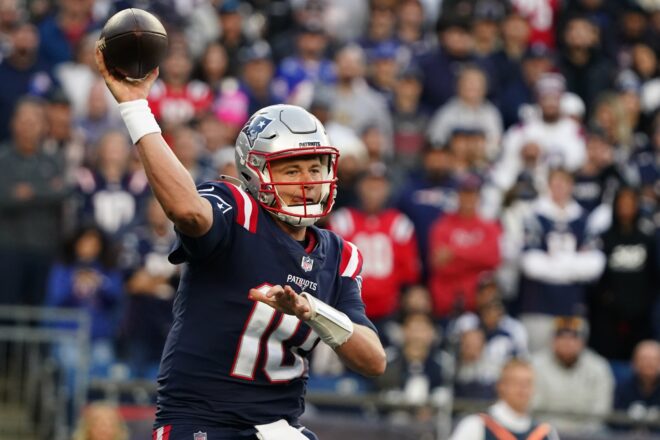 It appears the honeymoon with Mac Jones is over, with the former first-round pick quickly finding out what it’s like to be an athlete in New England.

After spending twenty years at the top of the NFL mountain, Patriots fans don’t seem to like being back in the pool with the other less fortunate.  Even worse, they seem to be less patient, and any signs of regression or adversity will typically start the drum-beating for the next guy, especially if there’s a chance they believe someone on the roster is the better option.

Jones used to be that guy.  After getting selected in the first-round a year ago last April, Jones won everyone over with his work ethic as he beat out Cam Newton to earn the starting role heading into 2021, followed by a season where he spent the majority of it fairly limited in terms of what they asked him to do, yet he put together the best year among his other first-round peers and led New England back to their first postseason birth in two seasons.

Granted, getting blown out against the Bills in the Wild Card round left a bad taste in everyone’s mouths, but considering the defense couldn’t force a single punt, the blame centered more around there with the belief Jones showed us enough where people felt confident he would continue his progression this season.

This offseason, he did all the right things.  He stayed in New England for the majority of that time working on his strength, his diet, his nutrition, and his sleeping habits, as well as being spotted holding various throwing sessions with a variety of receivers.  He put in the work and continued to get better, which seemingly had him set up for a productive preseason.

They had a terrific minicamp.  So much so that Bill Belichick even ended things early and the mood seemed positive heading into training camp.

But then, with Josh McDaniels having moved on this offseason, there seemed to be changes to what was a new offense and that’s where the problems seemed to start.  All the progress came to a screeching halt and instead each day was spent grinding through this new scheme as Jones and his receivers struggled to execute it.  They spent each day seemingly banging their heads against the wall from July through August, leading to a rollercoaster of practices and two preseason appearances that were anything less than encouraging.

By the time the season started, the playcalling was erratic and uneven, and we saw it down in Miami in Week one.  New England struggled to sustain drives, and when they weren’t executing, they were turning it over.  The next week in Pittsburgh, the feeling against the Steelers was similar, but it was the Patriots’ ground game that played a big role in that win as the Patriots rushed for a combined 124-yards, which included a touchdown as New England managed to get themselves into the win column.

However, in Jones’ last start in Baltimore, that one was probably the most frustrating.  Like last season against the Saints, Jones finished the game having thrown three interceptions, two of which came on passes to DeVante Parker as the game plan clearly centered around the veteran receiver as he was targeted 10 times with five receptions for what ended up being a career-high 156-yards.

But those 10 targets were double that of anyone else with a completion total of just 50%, compared to Kendrick Bourne (4/5 58yds), Jonnu Smith (4/4 25yds), and Nelson Agholor (2/3 41yds) to name a few.  Two of those targets also resulted in turnovers, with Jones screaming after one of them thanks to Parker apparently running the wrong route.

That game ended in frustrating fashion as Jones ultimately got hurt and suffered the ankle injury on a throw where he was hit as the ball was released while trying to connect with Kendrick Bourne for the offense’s last play of the game. 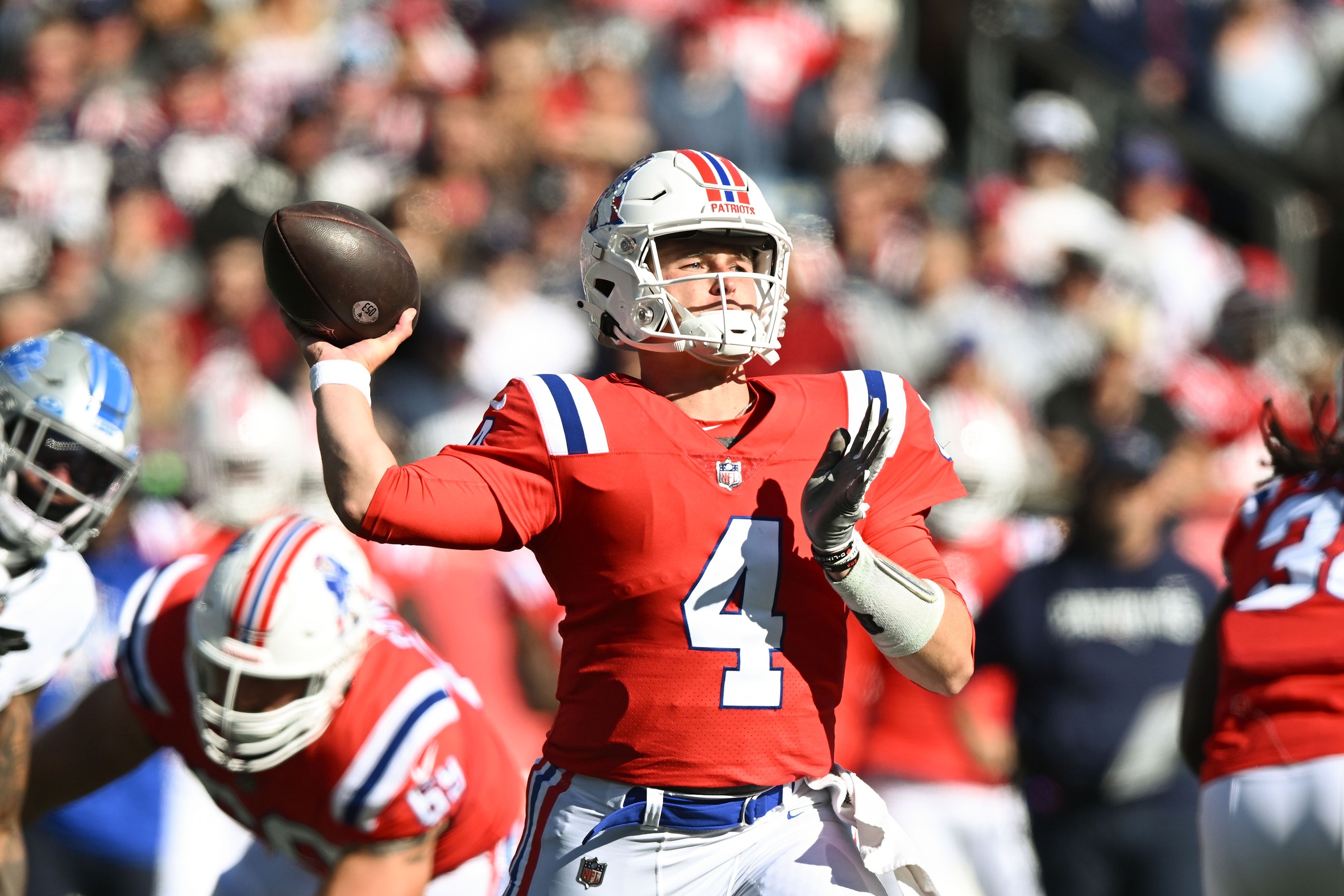 Now Jones is finding out how fickle fans in New England can be.  While he’s been sidelined, he’s likely watched as they’ve become enamored in Bailey Zappe the same way they did with him after two showings from the rookie that were similar to what we saw early on from Jones.  Zappe has dinked and dunked his way to one win on Sunday and nearly had another the week before, while also having thrown just one interception.

Jones’ injury and Zappe’s performance through two games have essentially already split the fan base, with one side having seemingly turned the page on the former Alabama quarterback, while the other believes Zappe’s done well, but he did it with a vanilla offense with the advantage of teams not yet having any real film on him.

At the same time, there’s also no question that the playcalling has evolved quite a bit since week one and even more so since the week three loss against the Ravens.  The operation has been smoother with a better mix of plays and the results clearly reflect that, even if last week’s outcome against Green Bay didn’t quite end the way we wanted it to.  One would have to think that the same changes will benefit Jones when he does come back, especially considering that four of his five picks have all come while targeting the same player.

Some will make the argument that Jones has had a couple of throws where he was fortunate it didn’t result in another turnover.  Anyone who has watched this team for the last 20-years is also likely aware the same could be said for Tom Brady.  Even the best will occasionally make a mistake, and sometimes a little luck isn’t exactly a bad thing.

The numbers already point to improvement. Jones started out last season completing 135-of-190 (71.1%) for 1243-yards, 5 TDs and 5 INTs through five games. Over the course of their final 12 games, the interception total dropped and he completed 217-for-331 (65.6%) for 2558-yards, 17 TDs and 8 INTs. So the more comfortable he became, the better he played and the turnover rate clearly dropped off.

Still, what Zappe has done should potentially be enough to elevate him over Brian Hoyer, who lasted just 10 minutes in Green Bay before being forced out of the game with a head injury.  That ended up being sort of a good scenario for the veteran considering he left having completed 5-of-6 (83.3%) for 37yds and seemed to have a good handle on what they were doing.  As a result, there were no black marks added to his resume, which as we know has been sort of an issue when it came to getting 60-minutes of mistake-free football from him.

At the end of the day, the Patriots have the benefit of two guys who thus far have shown are capable NFL signal-callers and for anyone looking to make a rash decision, it doesn’t make much sense.  Truthfully, there’s just not enough data from either of these guys to really know who or what they’ll become just yet.  Jones showed enough last year where he deserves the benefit of the doubt, although Bill Belichick has emphasized repeatedly over the last few days how crucial ball security is, which will likely have Jones on a short leash when he does get back out there.

At the same time, considering most of those turnovers have come on targets to one player, how Parker is viewed moving forward will likely change.  Unless he’s wide open, we can probably expect Jones to look elsewhere.  But given how much better the offensive line has played and how far the ground game has evolved, as well as how much of a factor play-action, a staple of Jones’ game, has evolved, things should be better.

Having been sidelined the last couple of weeks, Jones probably already has some additional perspective and appreciation for where he is.  Unfortunately, he’s also likely aware that in just two weeks he’s gone from being “the guy” to a player who is seemingly back to square one and will need to once again prove himself when he does eventually get back out there.

As a result, the good news is it’s becoming clear the Patriots do have a capable player behind Jones, which should potentially give them some return on that investment at some point.  Now it’s up to Jones to prove that holding the clipboard is where Zappe belongs.  Because if he doesn’t, the “Zappe” chants at Gillette Stadium will only continue with a fan base that certainly isn’t happy with being back at the bottom of the AFC East.

Needless to say, welcome to the reality that is playing in New England, Mac.  And good luck.