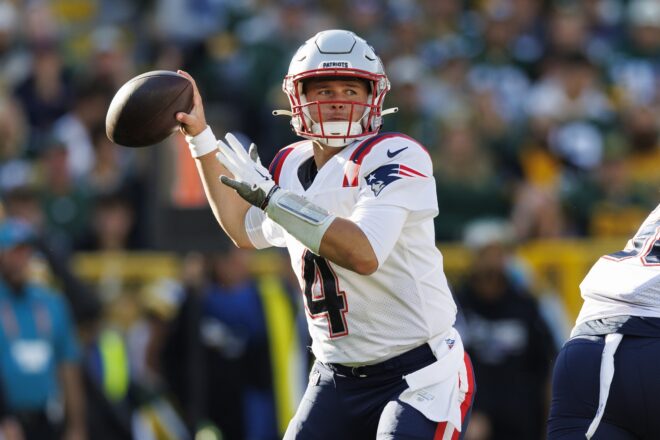 Good morning, and happy game day for the Patriots’ long-awaited return to the classic red “Pat the Patriot” throwback uniforms. Today the high-scoring Lions come to town, which should be an intriguing game to watch.

Bailey Zappe will make his first professional start and will be facing a Detroit defense that is giving up even more points than their #1 offense is putting up. The big question is, can the Patriots’ offense under Zappe generate enough points to put the Patriots over the top, given his lack of experience?

Helping out is the emergence of Marcus Jones, who was arguably the best kick returner in college last season. Last week, he was electric in Green Bay with the ball in his hands. He can flip field position in an instant, and the team will need him to replicate what he showed in his first game action last week.

Patriots Players to Watch Against Detroit:

The Patriots and Lions don’t play each other often, but when was the last time you heard, “it will be hard to keep up with Detroit’s offense?” It is true; the Lions have the highest-scoring offense in the league and a plethora of talent at the skill positions.

However, the Lions are banged up right now with RB D’Andre Swift, WRs Quintez Cephus, and D.J. Chark already ruled out. Two of their most productive WRs, Amon-Ra St. Brown, Josh Reynolds, and TE T.J. Hockenson, are questionable. So, many of their productive players may be missing. But without Swift, St. Brown, and Chark last week, they scored 45 points.

So, here are our Patriots players to watch today.

Jamie Collins — Will he play or not today? Bill Belichick said earlier in the week that he was still recovering from offseason surgery, so he may not be ready. But if he can still run, he’d be a welcome addition in the running game as well as in the passing game.

Kyle Dugger/T.J. Hockenson — This is a situation that both teams will want to monitor. Both are banged up and questionable this week. If both play, Dugger will be needed to cover tight ends (tight endage Clare) and would be a big addition to the safety group. Again, both players are banged up and needed by their respective teams, and it will be a great matchup to watch.

Nelson Agholor/Kendrick Bourne/DeVante Parker — The Patriots’ top three wide receivers (Jakobi Meyers is questionable) will have to step up their games this week against a Detroit secondary that has struggled badly this year. If the running game gets going as we expect it will, it should open up play-action passing for Bailey Zappe. And with the speedier guys (Agholor, Bourne) the opportunity to make some yards after the catch (YAC).

Look for the Patriots to target Amani Oruwariye, who has struggled badly this season. He has an overall Pro Football Focus (PFF) grade of 27.7 through the first four weeks. That is dead last, 117th out of 117 cornerbacks who have played at least 50 snaps. His coverage grade is 116th, next to last.

Damien Harris/Rhamondre Stevenson — The Patriot running back tandem was very impressive last week in Green Bay, gaining over 150 yards. They are going against a Lions-run defense that is giving up 165.7 yards per game.

The Patriots want to run the ball, especially with a rookie QB making his first NFL start. They should be able to find some gaps, not only in running but receiving as well. Lions LB Alex Anzalone, has struggled this year. He’s overrun gaps, missed tackles, and has struggled in pass coverage.

The 1a-1b tandem, as well as Hunter Henry, should have a nice day today.

Jalen Mills — The Patriots’ corner is also questionable for this game, and as we mentioned, the Lions have a lot of talent at the skill positions. If Mills can go, it would boost the Patriots’ secondary which will be tested today.

Our view from here is if Mills is ready, then the Patriots’ top three cornerbacks should be Mills, Jonathan Jones, and Jack Jones, replacing Myles Bryant. If Bryant is on the field, look for Jared Goff and the Lions to target him in coverage.

Sebastian Guiterrez: The Patriots signed the 6’6, 295-pound offensive tackle to their practice squad. Guiterrez played for Minot State (North Dakota) for 42 games with 35 starts in his college career.

He was in training camp with the Broncos but was released in the final cutdown of the 53-man roster. Since then, he’s been working in a pizza shop while still working out, hoping to get another shot at making an NFL roster. Like another Patriot offensive lineman, his nickname is “Sea Bass.”

Brian Hoyer: The Patriots placed their backup QB on IR after he suffered a concussion against the Packers last weekend. He will miss at least four games before he’s eligible to return.

Garrett Gilbert with Hoyer out, Gilbert was quickly signed to the practice squad, and he’ll be elevated to the game-day roster for today’s matchup with Detroit. Gilbert is familiar with the Patriots, having spent 15 weeks on the practice squad in 2021.

Jamie Collins: The former Patriot has returned to the team for the fourth time, signing a practice squad contract as they look to beef up their run defense. Collins has the ability to play an off-the-ball inside linebacker role as well as move outside on the edge.

When he was drafted by the Patriots in 2013, he was an uber-athletic player, but it will be intriguing to see whether Collins, 34, has much left in the tank. However, the Patriots used him mainly on passing downs a year ago.

The slate of games for Week 5 and my predictions are straight up for this week.

Allen leads the Bills in rushing yardage, rushing touchdowns (he’s the only Bills’ player with a rushing touchdown), and rushing first downs. If the Bills want to be playing deep in the postseason, they need a healthy Allen, allowing him to pick his spots, not being the only running threat.

Jets CB Gardner Has Dreamed Of Matching Up Against Tyreek Hill:

The Jets drafted cornerback Sauce Gardner #4 overall in this spring’s 2022 NFL Draft, and he has not shied away from wanting to face the best of the best of NFL receivers.

Gardner told the New York Post this week that he’s looking forward to this week’s matchup against Miami’s Tyreek Hill. “This is what I dreamed about coming to the NFL,” Gardner said.

“I mean about what you would expect. They build the formations. They have a core group of running plays, that complement each other. Play-actions come off that, primarily with the quarterback under center.

“They have a good sub-passing – or sub-running game with the quarterback in the gun. So call it a sub-running game. But they’ve had multiple explosive plays. I don’t know, four, five runs over 50 yards, whatever it is.

“To get 200 yards rushing on a handful of plays, that changes your numbers pretty significantly. They’ve done a great job at running the ball at second-and-long, second-and-7-plus. They’re averaging like 10 yards a carry, which is unheard of, or pretty unheard of. So they’ve done a great job in that area. Their backs have taken some short runs and turned them into long runs with good running, poor tackling, however you want to look at it. Which is always a factor in the running game, is the running back and the yards he makes after contact.

“But they’ve also created a lot of yards by blocking until the runner even gets to the first guy. So they’ve done a good job at both. But they have a good complimentary game. If you’re stopping one run, then they have another run that compliments that and vice versa. So they do a good job of, I’d say, keeping the defense balanced. Their tackles do a good job at the double team blocks, with [Taylor] Decker and [Penei] Sewell. They do a good job of creating space in the off-tackle areas.

“The backs are good backs. It’s not like Baltimore where the quarterback’s gained a lot of yardage. But if you look at the receivers, they’ve got about 100 yards too, right? Between [Amon-Ra] St. Brown and [Josh] Reynolds. So there’s another, some of the bonus yardage that’s going on there that you have to defend.”

Patriots head coach Bill Belichick asked how the Lions have used their running game to set up the passing game and vice versa.