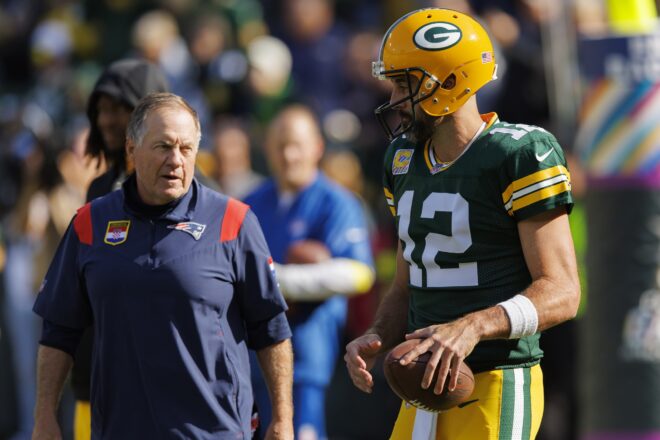 When it comes to Green Bay Packers quarterback Aaron Rodgers, there’s something about facing Bill Belichick that seems to bring out the worst in him.

That was almost the case again on Sunday as New England went into Lambeau Field without their starting quarterback in Mac Jones, along with losing back-up Brian Hoyer barely 10 minutes into the contest.

On paper, it should have resulted in a blowout loss to a guy that some pundits pencil in every year as the best quarterback in the league.  Instead, he ended up in a shootout against a young defense and a rookie quarterback and barely escaped with an overtime win.

Save for a couple of miscues and some conservative playcalling, the outcome could have and should have absolutely been different.

After all, they held him in check all game and even had a rookie defensive back in Jack Jones step in front of a pass right before halftime that he took back for a touchdown, stunning Packers fans who likely came into this match-up believing that without Tom Brady, it would finally be a relatively easy win.

Instead, their guy played poorly against Belichick’s team for the second-straight match-up, and he was again bad down the stretch.  Rodgers was just 6-of-10 throwing the football in the fourth quarter, which is one of the key reasons why New England hung around and nearly ended up in a position to pull off the upset.  The same thing happened in 2018 when Rodgers went just 2-of-7 for 15-yards in the final quarter of that game.

The difference?  Brady put up 14 points during that span and sent him home with the loss.

This time around, he was facing rookie QB Bailey Zappe who played well enough to beat him armed with a ground game that stepped up in a big way throughout this one.  The killer was just the fact the coaches didn’t allow Bailey a pass attempt in a non-passing situation on their final possession, which had been key in his success throughout the game leading up to overtime.

After getting absolutely terrific field position thanks to a 20-yard return by Marcus Jones to set them up near midfield at their own 49-yard line, they ran it twice, picking up 5 yards on the first carry by Damien Harris, and then got shut down on the next for no gain.

That put Zappe in an obvious passing situation and the Packers came after him and forced an incompletion to Hunter Henry.

New England then punted the ball back to Rodgers and that essentially sealed it after the veteran finally got his act together and put together a drive to set up a game-winning field goal.

Rodgers clearly felt the pressure and knew how important getting this one was given that a loss would have dropped them to 2-2 on the year and put them behind the 3-1 Vikings in the NFC North, with Minnesota having earlier held on for a come-from-behind win in London Sunday.

“You can’t be 2-2 losing to a third-string quarterback and not playing great in all three phases, so we had to have this one,” Rodgers said via ESPN. “That doesn’t take anything away from the joy of winning, but this was one we had to have.”

Better to be lucky than good, because that’s essentially what he was yesterday.  With a healthy Mac Jones, the Patriots only needed a play or two to put them in a position in overtime where maybe this one turns out differently.

Instead, Belichick’s club came away on the wrong end of a game they could definitely have stolen.  The one solace is that despite being 1-3, they should at least come out of that loss with some confidence while knowing they’re better than people give them credit for.

Moral victories typically don’t mean much but with plenty of football still left to play in this 2022 NFL season, they at least have something to build on as they get set to turn the page and face the Detroit Lions next Sunday at Gillette Stadium.