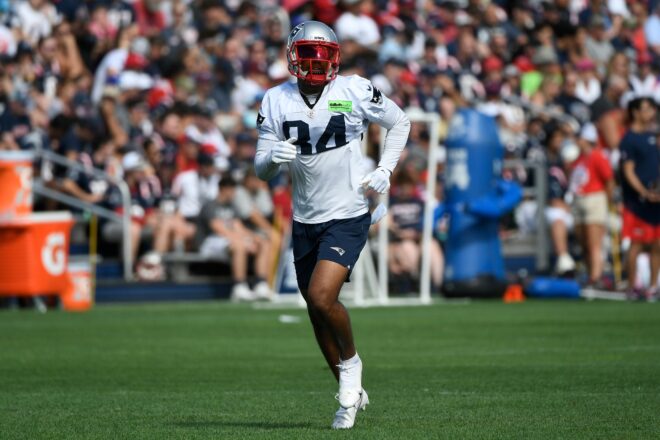 The issues with New England Patriots wide receiver Kendrick Bourne have been a mystery up to this point after we’ve seen Bourne be limited both during training camp, the preseason, and then again on Sunday.  That’s obviously led to him having become a topic of discussion leading to questions as to what the problem is.

NBC Boston’s Tom E. Curran appeared on Gresh and Keefe on WEEI on Tuesday and revealed that Bourne’s issues apparently stemmed from a mistake he made during camp that appear to be ongoing.

“I think it’s a Patricia thing,” said Curran.  “I think Kendrick Bourne showed great production last year and enthusiasm and Josh McDaniels got a lot out of him.  Just by seeing what transpired in the offseason and speaking to some folks around the situation, I think that, from what Albert Breer reported about Kendrick Bourne not being fully on board with the way the install was going here, looking at his role and seeing it diminish, seeing it diminish with two tight ends on the field.”

“There was a meeting prior to the Carolina Panthers game that he was just a smidge late to, I was told that resulted in the benching that night,” continued Curran.  “All of those things I think, combined have landed him in Matt Patricia’s doghouse.  But are we talking about somebody who’s gotten sideways with a particular coach and Belichick wants to give Matt the latitude to make his own decisions on how he proceeds?  Or are talking about a guy who’s an active pain in the ass?  I don’t know, but we’re looking at a guy whose production, and the fact that he was in moth balls on Sunday certainly caught the eye of the owner from what I understand, and I’d be surprised if he stays down for much longer.”

Curran also pointed out that Bourne has been a productive player and as far as he can tell, there doesn’t seem to be much to give him a reason why the veteran receiver isn’t out there.

“When you look at the numbers from last year, he caught 78% of the passes thrown to him, 55 out of 70, for a wide receiver.  And I know some of them were within a couple of yards of the line of scrimmages, but that’s 78% of the catches.  Mac Jones’ quarterback rating throwing to him was 132.  The guy ran 12 times for 125-yards.  He had never run the ball in the NFL previously as a wide receiver.  He’s a productive player, he’s a dynamic player.  Again, it doesn’t look like he’s some kind of diva wide receiver that’s a pain in the ass.  I just don’t know what the great transgression is that lands him in the doghouse where he’s not active.”

He also went on to say that given the whispers he’s heard, Kraft has apparently let the coaches know that this situation needs to get resolved.

“It’s my understanding, I was not told directly, but what I have gleaned, Robert Kraft noticed it,” said Curran.  “Robert Kraft made his opinion known, and going forward I think Kendrick Bourne will have a bigger role.”

He was clearly missed against the Dolphins.  Bourne played just two snaps on Sunday in Miami, hauling in a 41-yard pass before a turnover got the offense off the field.

With the team heading to Pittsburgh at 0-1, we’ll see if Bourne’s status changes on Sunday against the Steelers.