3 weeks ago at 5:00 am ET
Follow @SteveB7SFG
Posted Under: Patriots News 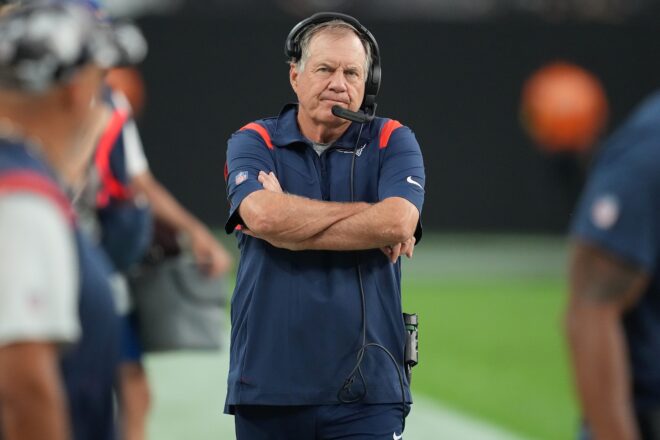 Good morning; here are your weekly Patriots news 09-11 and some NFL notes this week. Before we turn to the NFL’s opening weekend, we’d be remiss if we didn’t mention that today is the 21st anniversary of the 9/11 attacks on America.

It is hard to believe that so many years have passed since that awful day. Most Americans old enough to remember will recall exactly where they were that day. Our country will never forget the victims, their families, and the first responders who ran into the maelstrom of the Twin Towers that day.

Thanks to “big guy” Ian Logue for filling in for me last week. He’s the best. Sometimes… stuff happens and last week was definitely one of those.

We know tomorrow, regardless of the outcome, there will be all kinds of way too early pronouncements made. Overreaction Monday started early this week in the AFC East after Buffalo curb-stomped the Rams on the road in LA.

The Bills are hungry, focused, and looked faster all over the field than LA did. Are the Bills the team that they’re “billed as,” which is Super Bowl contenders? They certainly appeared so on Thursday Night Football, but there are 16 more games to go. I thought, however, that running Josh Allen late in the game, already ahead by 21, was a bit too risky; you don’t want him getting hurt at that point.

Another outlier was the play of Rams CB Jalen Ramsey. When the Bills targeted Ramsey, they were 6-7 passing for 124 yards and 2 TDs. The passer rating was a perfect 158.3; I seriously doubt Ramsey will have many of those types of games moving forward. Ignore the Noise tomorrow, whether it is positive or (gasp!) negative.

Patriots Players to Watch Against Miami:

The Patriots will have to contend with a ton of team speed against the Dolphins this week, as I pointed out in my Key Matchups piece on Thursday.  Tua only averaged 6.3 yards per attempt in his three games against New England. As Evan Lazar pointed out in a recent column on Patriots.com, that would rank last among 35 QBs.

But the Dolphins’ RPOs were a mismatch for Miami, Tua shredded the Patriots’ defense on those, and those would prove to be a big difference in the games. RPOs tend to feast on zone coverage, but the Patriots dare to play man against Miami’s speed?

The new look linebacking crew will have to step up and play extremely well this week, but they’re not alone. Here are players to watch from a Patriots perspective.

Jonathan Jones — Talk about a welcome back? Jones missed most of last season with a shoulder injury, and right out of the gate, he gets tasked with covering Tyreek Hill, who was the Dolphins’ big free agent acquisition this season.

Jones has had some success against Hill in the past, but Hill and the Dolphins will want their big addition paying dividends right off the bat. How Miami uses Hill still remains to be seen. But he no longer has Patrick Mahomes throwing him the ball. That’s what makes Week 1 every year so intriguing.

If the Patriots are to be successful in Miami, they’ll need Jones to be on top of his game and stick close to Hill all game long.

Matthew Judon — The game plan is probably going to be to take away the Dolphins’ RPOs and make Tua hold on to the ball a bit longer than he has in the past. And in facing Austin Jackson, he should have a distinct advantage.

But it isn’t just in the passing game. Judon will have to set the edge in the running game. Judon was in the Pro Bowl and was tied for 7th (Aaron Donald) with 12.5 sacks The Patriots need him to step up his game.

Mac Jones — The Patriots’ offense struggled all summer in training camp and preseason, and Jones was, at times, visibly frustrated with how the offense was sputtering. The timing was off, the protection was very inconsistent, and Jones wasn’t able to work the deep portion of the field, which was a priority this year.

Jones is a captain this year, he has adopted a bigger leadership role. The Dolphins are a blitz-heavy team, and Jones will have to keep his cool and get the ball out quickly and accurately.

Newcomer DeVante Parker and Kendrick Bourne should be players to watch to get the chains moving for Jones.

Mack Wilson/Raekwon McMillan — With Dont’a Hightower and Jamie Collins gone (along with Kyle Van Noy), the Patriots lost a ton of experience, but with the two new faces inside, the team gets a lot more speed and coverage ability. That is something many have clamored for some time.

McMillan, who was drafted by Miami, was brought in by the Patriots last year and had a very good preseason before tearing an ACL and missing the season. He’s anxious to prove himself against his old teammates.

Wilson was brought in via a trade with the Browns and has shown good coverage ability and the ability to hit hard. He was in need of a fresh start, and this should be a prime opportunity to start off on the right foot. This is exactly what the doctor ordered in terms of linebacker speed.

Marcus Cannon: The Patriots reportedly brought back their former right tackle, signing him to the team’s practice squad. If nothing else, it improves the team’s depth at tackle, giving them five on the roster. But the signing nor a corresponding release of a player from the practice squad has been seen on the league’s transaction wire.

Cannon, 34, was released by the Texans in March and drafted by the Patriots in 2011.

The slate of games for Week1 and my predictions are straight up for this week.

Bills Jordan Poyer, Dawson Knox Get Reworked Deals: Buffalo has reworked the 2022 season contract for Poyer, one of the best safeties in the game. He had asked for an extension in the preseason, but since no agreement could be reached, the team reworked his deal that could pay him an additional $2 million in incentives.

Dolphins … Not Surprisingly Opt For All White Uniforms Today:

The Dolphins will wear their all-white uniforms in the Florida heat today, forcing the Patriots to wear those horrible all-blue monstrosities.

Miami typically wears their road whites in afternoon home games, especially in the warmer months against northern teams. It isn’t called a home-field advantage for nothing.

The New York Jets had already announced that QB Zach Wilson will miss at least the first three games of the season. They signed LT Duane Brown (37) to replace another important injured player, LT Mehki Becton, who is out for the year.

Now Brown is out for Sunday’s opener against the Ravens with a shoulder injury. Head coach Robert Saleh said he could be heading to IR for a minimum of four weeks. With Brown now out, RT George Fant, who was moved to the right earlier in camp, will be moved back to the left side.

“I don’t think it takes longer to declare. Games are the same length. I think it’s just you have to decide once you see how the game’s going, what you want to keep in, what you want to throw out or maybe what you might need to add based on the way it’s going. It’s hard to get everything ready for everything. Put your chips on a few numbers and if those numbers come up, you’re good, and if some other numbers come up, you probably need to do something. I can’t think of too many opening days that there wasn’t in-game adjustments that were an important part of the game. I’m sure it’s true both ways. It’s opening day, nobody’s really shown anything. We’ll see what happens first game. That’ll declare a lot more going into the second game, that’ll declare a lot more going into the third game and then there’ll be a point that we get a pretty good feel for what the other team’s going to do and probably what you’re going to do, too.”

Patriots head coach Bill Belichick asked about the uncertainties of Week 1 of the season every year and if in-game adjustments take longer in Week 1 rather than later in the season.

By: Ian Logue
When it comes to Green Bay Packers quarterback Aaron Rodgers, there's something about facing Bill Belichick that seems to bring out the worst in him.
22 hours ago

By: Ian Logue
The New England Patriots are apparently looking to add a little depth at linebacker, and it looks like they'll be bringing back a familiar face…
23 hours ago