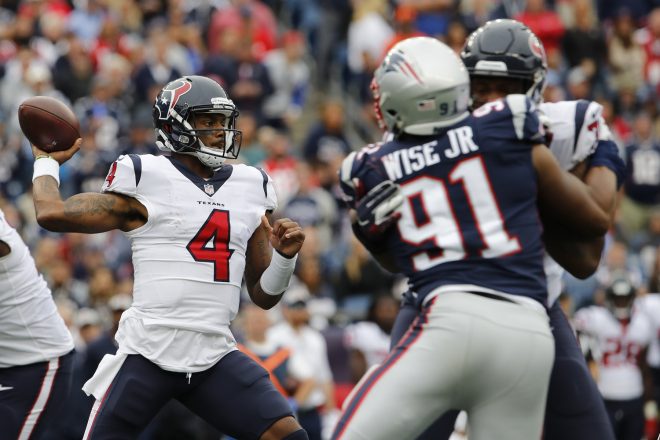 During the late-summer gathering benefiting the Patriots Charitable Foundation, Wise was recognized for his outstanding commitment to giving back to the community. Guy became the 20th Patriots player to receive the award since its debut in 2003.

“Deatrich has an infectious laugh, an engaging personality and a generous heart,” said Patriots Chairman and CEO Robert Kraft in a statement. “Those are the characteristics our team sees every day and are the same qualities he shows when he is out in the community. Deatrich started the Wise Up & Co. Foundation with his brothers, Daniel and Solomon, to leverage their names off the field with the aim to have a positive impact in the community. Deatrich has been a pillar in the community by supporting organizations that share the same mission, to assist youth, fight hunger and celebrate individuality.”

Over his NFL career, Wise has been involved with Big Brothers, Big Sisters and runs a Thanksgiving and Christmas drive to support those in need in the New England community. Two of Wise’s signature charitable events include his annual Big Man Camp held to help lineman develop their techniques, as well as their physical and psychological characteristics, and his annual Block Party held in Boston’s Mattapan neighborhood that celebrates organizations, creators, and businesses in the community.

Dating back to his rookie season, Wise has participated in more than 40 different Patriots Foundation events.

“You don’t go out in the community for the gratification. You just do it because it’s in your heart to do,” Wise said after receiving the award.

“It’s an honor to win an award of this prestige and to be in the same group as everybody who’s won that before and have my name with the Burton family.”

Since its initial creation, the team award has honored the late Ron Burton, the first player ever drafted by the Patriots during its 1960 inaugural season, and to commemorate a community leader whose widespread charitable work became a model for how a player can make an impact off the field.

By: Ian Logue
The New England Patriots are continuing to get ready for the Detroit Lions this weekend, with Bill Belichick's team trying to avoid their third straight…
40 mins ago