7 years ago at 6:31 am ET
Follow @SteveB7SFG
Posted Under: Patriots Commentary 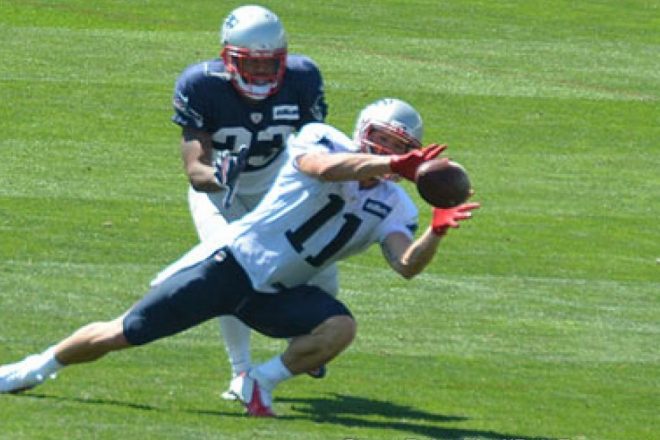 The Patriots wide receiver corps lost two players to season-ending injuries this week. Both Brandon Gibson and Brian Tyms were placed on IR, now health concerns to Julian Edelman,Aaron Dobson and Brandon LaFell will be of major concern with the season just around the corner.

Edelman tweaked an ankle in early August and has just returned to the practice field. Dobson has also been injured since early August after a fast start to training camp with a lingering hamstring issue. LaFell hasn’t practiced at all this spring or at training camp, suffering from a foot injury which resulted to his being placed on PUP. Now the question is, does LaFell begin the season on PUP and be forced to miss the first six games?

One of the problems the top unit of the offense has had to deal with during the first two preseason games was the absence of their top players. Besides no Edelman and LaFell, they also were missing with the top two tight ends in Rob Gronkowski and Scott Chandler.

The team addressed depth with a one-year deal with veteran wide receiver Reggie Wayne included a $450,000 signing bonus. That kind of money paid to Wayne upfront is pretty much locking him on to the 53 man roster. Edelman’s return will also be a welcome sight for QB Tom Brady.

So at this point, Edelman, Danny Amendola and Wayne are roster locks. If Dobson is healthy, he’s pretty much a lock now as well. LaFell’s status will determine the roster slots of Chris Harper, Josh Boyce, Josh Boyce and Jonathan Krause. Harper has been increasingly impressive this summer and has been a go-to guy in both preseason games. The undrafted free agent from Cal has been learning the system on the go and was singled out for praise from Bill Belichick.

Boyce has been a guy who is entering his third year and has yet to make an impact on the field. With so many players missing this summer, he took advantage of getting more reps in practice and was impressive. However, that didn’t carry over into the preseason games and now his roster status is in jeopardy. His stock took a further hit with his missing practice on Wednesday. Krause and fellow rookie Zach D’Orazio are practice squad candidates at this point.

A starting unit of Edelman, Amendola and Wayne with backups Dobson and LaFell/Harper coupled with the twin tight ends of Gronkowski and Chandler is most probably what we’ll see against the Steelers on opening night. It’s possible that unit may actually play against the Panthers this weekend in what Belichick calls the dress rehearsal for the regular season in the way the team preps all week.

On paper there are plenty of options for Tom Brady to throw to….provided that these players remain on the field and healthy.