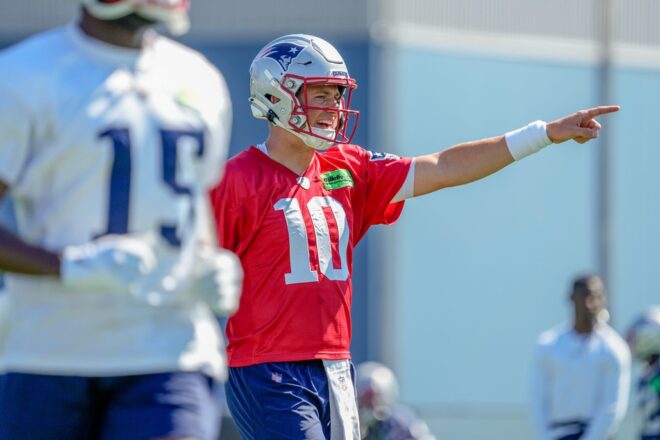 Good morning; here are your weekly Patriots news 07-31 and notes this week. Training camp has been open for four days (the team is off today), and the first padded practice is scheduled for tomorrow morning.

The crowds were back out in force for training camp, so the interest in the 2022 version of the New England Patriots (if there were any doubts) remains high. Yesterday, there were so many fans in attendance that the team opened the walking ramps to the stadium that overlook the practice fields to handle the overflow.

This is a football region, to be sure.

Davon Godchaux: This week, the veteran interior defensive lineman was rewarded with a two-year, $20.8 million contract extension with $17.85 million guaranteed. His agent is Drew Rosenhaus, who announced the deal late on Weds.

The move saves the Patriots about $1.5 million this year against the salary cap and pretty much cements that the 27-year-old lineman will be here for the next three years. It also shows that Bill Belichick believes that the team’s struggles against the run were unrelated to Godchaux’s play.

PFF tweeted back in February that Godchaux was the 2nd rated defensive lineman against the run through the season’s final eight games. “Over the final 8 weeks of the season, Davon Godchaux’s 82.0 run defense grade ranked 2nd best among all Interior DL”

“It fits me,” Godchaux said of playing for the Patriots. “I feel like when I first signed here, this was home. Coming from Miami with Coach Flores, they ran the same system, and I came here, and I was a plug-and-play. I fit right in,” he said.

“Bill, you know, he’s honest. Positive criticism. He’s going to hold you accountable. I needed a coach like that. When I got here, it was everything that I thought it was.”

Godchaux played 59.2 percent of the team’s defensive snaps, most of the Patriots’ interior linemen. His 65 tackles were the fifth most on the team, surprising since he frequently faced double teams.

Belichick heaped praise on Godchaux on Thursday morning on the field at training camp. “He’s one of the best defensive linemen in the league,” said Belichick. “I’m glad we were able to work that out with Davon and Drew. Obviously, both sides are happy, the contract is signed, we go forward.”

Raekwon McMillan: A year ago, Bill Belichick was complimenting McMillan, who the Patriots had signed as a free agent. He seemed primed for a big role in the Patriots’ defense. But then he tore his ACL and was lost for the season before the regular season began.

But the Patriots resigned him in September, a sign they were intrigued with his potential here. This week, he came off the PUP list and is back at practice with his teammates. And he is a happy camper to be back on the football field.

“This is where I find my peace. I’m glad to have my peace back.”

Bill Belichick’s commented on having McMillan back on the first day of camp.

“Raekwon works really hard, really smart player, has the experience, understands a lot at the linebacker position, obviously, there’s a lot going on there, but he handles things well,” Belichick said Wednesday. “Signal caller, multiple-position player. It’s good to see him back out there. He looks like he’s recovered very well, and based on what we saw in the spring and limited looks here this first week, I’d say he’s doing very well.”

Q-Tip Helmets: The so-called “Guardian caps” that are very funky looking are for the offensive and defensive linemen, linebackers, and tight ends to wear through the first couple of preseason games.

Designed to lower the risk of concussions, most players said that the caps didn’t affect their game, although Josh Uche said it looks like a Q-Tip helmet.

The First Four (Non-Padded) Practices Are in the Books:

So what did we learn? Well, as in every summer, a few players have stepped up their game. But it should be noted that with no pads and no contact, factors favor the offense, helped no doubt by the defensive backs wearing mitts that prevent them from grabbing and holding wide receivers. On Saturday, the offensive linemen joined them.

On the first day of camp, Mac Jones and the offense dominated. He showed early chemistry with DeVante Parker, who showed that when he’s healthy, he can still be a force in the red zone, making some nice plays and getting the crowd fired up.  Jones has looked very sharp overall and seems poised for a big Year 2 jump in play.

After getting off to good starts on Thursday and Friday, it was the defense that dominated late. But it should be noted that the team was working on just red zone offense, which drastically shortens the field, and with no running game to worry about, they’re playing pass on every down.

Saturday, although the tempo was ratcheted down a bit, the offense was appearing a bit sluggish, so perhaps today’s day off will do them wonders. But several players stood out thus far besides the aforementioned Jones and Parker.

Hunter Henry/Jonnu Smith — Henry picked right up where he left off last season and showed good chemistry and the two were hooking up often. That was expected. But with Jones and Smith starting to get it going was cause for the coaches and fans to get some excitement going.

Smith had the catch of the day on Friday. Early in 7-on-7 work, Smith made a great move on Kyle Dugger, and then, as Jones lofted the pass high in the end zone, Smith did a twisting, turning leap and snatched the ball out of the air over the safety. The fans erupted with cheers. He later beat Dugger again for a score. It is a big development if the two can continue to build on this.

Joshua Bledsoe — Often the forgotten man in the Patriots’ crowded and deep safety group, we were really high on him after watching his college tape, despite the fact that the team knew that he wasn’t going to play in 2021 due to a wrist injury.

But he soaked up the playbook and sat in the meetings last year, which is paying dividends thus far. With Jabrill Peppers still on PUP and Devin McCourty’s snaps being limited, it gives Bledsoe an opportunity to get plenty of run with the first-team defense. And he’s been active, with five PBUs thus far.

Although Dugger and Peppers will play the same role, Bledsoe played the Pat Chung role as a box safety, covering tight ends, occasionally dropping to play deep safety, and even a few snaps as a slot corner. Bledsoe is off to a great start at camp, and if he continues to impress as he has once the pads come on, then he will definitely be in the mix to earn himself a roster spot.

The Cornerbacks — Maybe these guys aren’t so bad after all. The coverage (albeit in the red zone only with no running game) thus far has been sticky. Terrance Mitchell has played well, and if the season started today, it would probably be him and Jalen Mills as the starting boundary corners.

Shaun Wade has had his moments but has been competitive every day. He’s been making the most of his opportunities with Jonathan Jones still on PUP. Malcolm Butler had a good day on Saturday, knocking a pass away from DeVante Parker in the endzone and didn’t allow a completion. Marcus and Jack Jones got some extended reps with the first teamers.

STs — Tre Nixon, Ty Montgomery, and Dugger have been working on returning kicks. Tristan Vizcaino went 5-for-5 on field goals on Saturday. He has a very strong leg as he easily converted FGs from beyond 45 yards. But if he’s going to replace the very steady Nick Folk, he’ll have to keep his high conversion rate. Because on Thursday, he was all over the place, while on Friday, Folk was spot on.  Consistency is the name of the game.

Brenden Schooler — The safety has been working nearly all of the practice sessions as a gunner. He has worked with veteran STs Matthew Slater, Justin Bethel, and Cody Davis on several different techniques.  He is an early candidate to keep the 18-year UDFA streak to make the 53-man roster alive.

Well, the extended mini-camp is over; tomorrow, the pads come on, and the heavy lifting begins, and we get to hear about the linemen and linebackers showing what they can do.

“He did a great job last year, but he’s starting from a much, much higher point this year from where he started last year. His offseason work has been significant, and I think everyone recognizes how well he prepares and how much further along he was than a year ago.

“And we have a much better feel for what he can do, what his strengths are, and how to try to play into those. He’s self-aware, too. He knows what he does well. We want to try to feature those.”

By: Robert Alvarez
The Date and time for Vince Wilfork's Patriots Hall of Fame induction ceremony is announced by the team,
8 hours ago

By: Robert Alvarez
Check out the Patriots mini-documentary highlighting Richard Seymour's football journey to becoming a Hall of Fame player.
16 hours ago

By: Ian Logue
Patriots news for Monday 8/8 along with some additional team notes.
19 hours ago