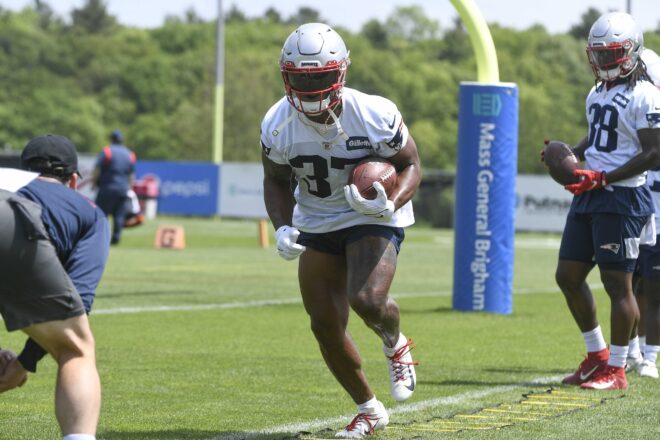 Some news and notes on this Thursday morning:

– This upcoming preseason certainly remains one of the most intriguing in recent memory for the New England Patriots, with a variety of positions in the spotlight.  But one of the areas with a significant storyline is going to be what happens at running back, which could potentially shape the success of Mac Jones in 2022.  Jones heads into training camp with a loaded group led by Damien Harris, who is heading into a contract year.  The fact the Patriots made two picks during the draft at the position in Pierre Strong Jr. and Kevin Harris points to a potential future without their star player, while also potentially seeing Jones’ former Alabama teammate, and someone who he’s said previously is one of his best friends, depart after the season.

– Harris broke the century mark five times last season and averaged 4.6-yards per carry, as well as scoring 15 touchdowns.  His touchdown mark tied him for second in the NFL with Arizona’s James Connor, with the two coming in behind Indianapolis RB Jonathan Taylor, who led all running backs with 18.  There’s no question he’s New England’s best running back currently, but that dynamic appears ready to shift since if he puts together a repeat performance, he’ll likely see a big payoff next offseason.

– The bigger question might be whether or not things unfold with Strong Jr. or Kevin Harris in such a way that the team surprises everyone and trades him before the season.  As we know, Bill Belichick is no stranger to moving on from a player if it benefits his team, but knowing the dynamic between Damien Harris and Jones and coming off of what was a frustrating year, that would seem to be a dangerous move from a chemistry standpoint.  Granted, it happened in 2003 with Lawyer Milloy and everything worked out fine, but things have obviously changed quite a bit since those days.  The Patriots were coming off a championship two seasons earlier and, aside from then-fourth-year QB Tom Brady, Belichick had a relatively veteran group.  This time, he’s got a locker room full of young players who he’s still trying to mold into becoming champions.

– Teammate Rhamondre Stevenson was a pleasant surprise last season, with Stevenson matching Harris’ 4.6 yards per carry average while amassing 606 yards on 133 carries along with 5 rushing touchdowns.   He runs with power and he’s got good acceleration, although he’s not quite as athletic as Harris.  That being said, he brought a terrific dynamic to the backfield that gave the club quite a 1-2 punch and should Strong Jr. and Kevin Harris each have strong camps, it’s going to be interesting to see how all of these pieces potentially fit together.  The thought by several reporters is that James White could start the year on PUP if he’s not ready to go in camp, which would give the team room to keep who they have.  But at the end of the day, something will need to give here, and it remains to be seen how things might shake out.

– When it comes to Stevenson, he’s quietly amassed some interesting statistics compared to his peers in just one season.  Per Next Gen Stats, the former Oklahoma Sooners standout finished last year ranked third in the NFL in Rushing Percentage Over Expected at 45.8, and per those same stats, he did it with 8 defenders in the box on 41.35% of his carries.  The latter stat was even 10% higher than Harris’ 31.68%, with Stevenson often facing defensive fronts that knew he was getting the football.  The two were also among the best in the league when it came to getting upfield, with Harris tied for fourth with Leonard Fournette at 2.65 for average time behind the line of scrimmage, while Stevenson came in a few spots after them at 2.69.

– But when it came to a 3rd-and-1 play last season, Harris was the one who was the most successful among Patriots running backs.  He carried 6 times with five first downs and 2 touchdowns, with Harris being held to no gain only one time (12/26 vs Buffalo).  Former teammate Brandon Bolden carried six times and converted just twice with one touchdown, being stopped for no gain twice and dropped for a loss twice.  Mac Jones led the way with seven attempts and six conversions, getting stopped for no gain just once (11/18 at Atlanta).  Stevenson did have two attempts, moving the chains both times.

– As for Jones, Pro Football Focus had an article ranking quarterbacks in the NFL in terms of who they felt were the best decision-makers, with Jones ending up in the top third of quarterbacks in his first season.  Jones came in at #13, right behind Buffalo’s Josh Allen, with Patrick Mahomes just above them.  The “methodology” behind the article came based on what they called a completion probability model, which looked at things such as game situation, route, defensive-back ability, receiver separation, men in the box, along with other factors.  They go into further detail, but it was certainly an interesting read.

– Looking back at things a year ago, it was interesting to see how Lawrence Guy had evolved as a player and to read about the things he was doing to help himself stay healthy.  Guy told ESPN’s Mike Reiss at the time that his Vegan diet is what made the difference, with Guy crediting his wife for turning him on to it.  “I’ve been eating vegan in the offseason for many years,” Guy told Reiss. “To me, it’s an aspect of replacing things with a healthier way of living. It has helped me fully recover and just flush the body out.  You get beat up on this field every day. Your body needs nutrition more than ever to recover. What’s the best way to do that? I think it’s plant-based. All you’re doing is prolonging your career in a certain way.”  The veteran did say that due to his position there are still things he does to incorporate meat, but the results are what has made him enjoy the change.  “I chose to go more toward a vegan-style diet to get a full recovery,” said Guy. “The plant-based protein, it’s amazing what you can do. You don’t need animal protein all the time to gain strength and recover.”

– Wednesday was a significant day for Baker Mayfield, who finally gets to part ways with the Cleveland Browns after their shocking offseason trade for embattled quarterback, Deshaun Watson.  That move came as a surprise to everyone including Mayfield, who also got to hear comments about the fact the Browns wanted an “adult” at quarterback, which was a little strange to hear.  The fact things dragged out as long as they did was also a surprise, as Mayfield wasn’t as highly coveted as you would have thought given on the success he’s led the Browns to in recent seasons.  The Panthers also gave up just a conditional fifth-round pick in 2024, which could reporteldy become a 4th if Mayfield plays in 70% of his snaps this season.  That’s much lower than it had seemed Cleveland was initially willing to settle for, but nevertheless, it closes the book on what’s definitely been one of the wildest stories of the offseason.

– With Mayfield being dealt, USA TODAY pointed out that it leaves just Josh Allen as one of just two quarterbacks from that 2018 group selected in the first round to be with their original team.  The other is Baltimore’s Lamar Jackson, with Allen so far as the only one to receive a second contract.  Jackson remains in talks with the Ravens but hasn’t agreed to one there just yet.  Mayfield was the first overall selection while Allen went at #7.  Sam Darnold was taken at #3 overall that year and his future is suddenly in doubt now that Mayfield has arrived after Darnold himself was traded to Carolina last offseason from the Jets.  Josh Rosen was taken at #10 and he’s already fizzled out, while Jackson was taken at #32 overall.

– Mayfield’s trade does impact New England, as the Patriots are set to take on the Browns in Week 6 and this takes him out of the mix.  Watson’s likely going to be facing a suspension at some point, which had Mayfield and the Browns settled their differences could have seen Mayfield potentially start when the team travels to Cleveland on October 16th.  Instead, all signs currently point to Jacoby Brissett handling things while Watson is sidelined, so it appears that Brissett will get a chance to start against his former team that week when the two clubs meet.

By: Steve Balestrieri
"Christian's (Barmore) done a good job. He's way ahead of where he was last year...He has a much better understanding of what we do,
17 hours ago