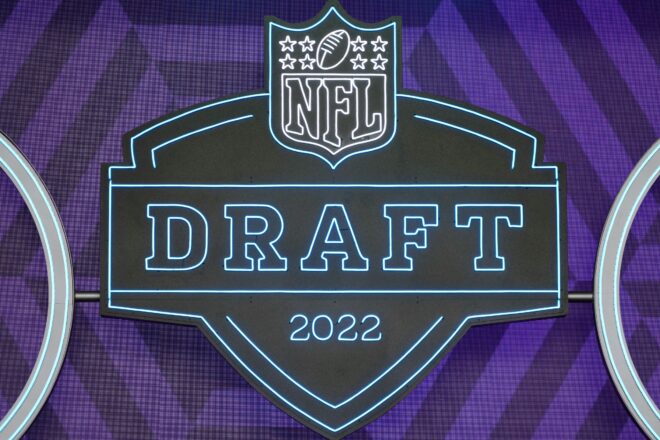 When it comes to playing at a small school, it definitely seems like guys who can make enough noise seem to get found.

We saw it with Kyle Dugger, who came from Lenoir-Rhyne University, a small school in North Carolina.  Dugger made enough plays in college to draw interest from scouts and it earned him an opportunity that he’s made the most of here in New England.

Fast-forward to Saturday after the New England Patriots finally selected a defensive lineman on Saturday, with Northwest Missouri State’s Sam Roberts getting picked with the #200 overall selection in Round 6.

Despite having played at a small school, there’s nothing small about the way he plays.  Roberts is a massive player, coming in at 6’5″, 292-pounds and he’s an absolute wrecking ball as a defensive player, so much so that he was another guy who made enough noise where he managed to get teams interested to the point where he ended up getting a call on the final day of the 2022 NFL Draft from the Patriots.

Looking at the film, he’s someone who Bearcats head coach Rich Wright moved around quite a bit in the defense and Roberts seemed pretty comfortable no matter where he played.  They had him lining up inside and outside, with Roberts’ speed and strength being two attributes that were hard to miss.

He’s clearly strong, barreling over guys and throwing them away with one arm en route to the ball carrier.  He’s also quick both in his feet and hands, quickly getting around defenders and using his hands well to both break their grip and swim around them before accelerating toward his target.  For someone as big as he is, his athleticism is definitely impressive.

The numbers back it up.  He finished with 166 tackles including 42 for a loss along with 17.5 sacks, 6.5 of which came last season.  He also blocked 4 kicks during his career and intercepted a pass.  He was a key part of a defense that allowed the second-fewest points in 2021 and was also fourth in both fewest rushing and total yards in Division II.

Roberts is a player with a big motor and he said a few days ago that his flexibility had already caught the eye of teams in the NFL.  According to the Phelps County Focus in Missouri, just three teams met with Roberts in person for a top 30 visit, which included the Arizona Cardinals, the Los Angeles Chargers, and the Atlanta Falcons.  The Patriots and Baltimore Ravens were among the two other teams who met with him over Zoom.

The Northwest Missouri standout said that teams were impressed with his frame and felt his flexibility was a big asset.

“Talking to teams, they like my size and athleticism,” Roberts said. “They think I can play as a flex-guy, that 3 to heavy-5 guy.”

Sounds just like the type of guy Bill Belichick should be excited to have as part of his defense this season.