4 weeks ago at 9:37 am ET
Follow @MarkMorse5
Posted Under: Patriots News 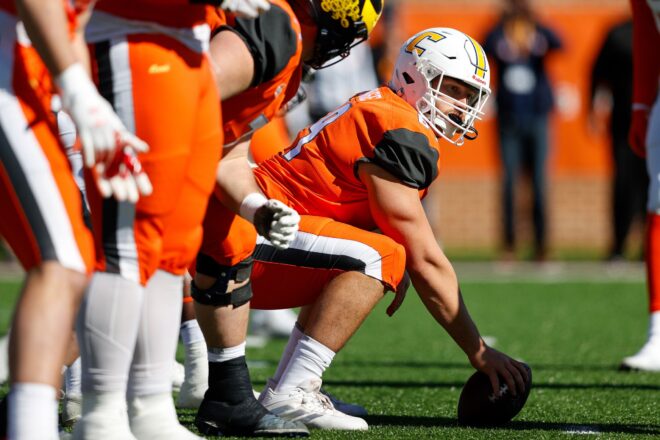 Bill Belichick and the Patriots traded out of the 21st selection with the Chiefs and received the1st 29th, 3rd # 94, and 4th #121.  The Patriots passed on Trent McDuffie CB Washington.  That is the player I had projected going to the Patriots with the 21st pick in my 1st round Projection.  But no, they traded it out.  Eight players need to be taken and these players were available to them; CBs Trent McDuffie, Kair Elam, Andrew Booth, Kyler Gordon, Daxton Hill;  LBs Quay Walker, Devin Lloyd, Nkobe Dean; NT Travis Jones.  Michael Holley proclaimed on the NBC Sports Boston live draft coverage stated the Patriots can’t lose.  Want to make a bet?  This pick came out of nowhere and even if this pick turns out to be the second coming of Logan Mankins, it will still be a reach.

anooga – 6’4.7” 307Lbs, 5.03 40-yard dash.  The Athletic The  Beast Draft Guide had this to say about Strange “Excellent quickness and pad level from snap to set-up … flexible lower body and does an excellent job repositioning his feet at contact to stand up defenders … has adequate length and active hands with a flexible coil … his punch placement is sharp and consistent … at his most confident in the run game … naturally aggressive in everything he does on the football field … embraces his rugged, mean blocking demeanor and prides himself on his quest to finish every play … has zero bad weight on his frame … his intelligence is clear on and off the field (3.71 GPA in college and was named Academic All-Conference all six years) … named a senior captain with outstanding football character — football matters to him … collected 44 total starts in three positions in college.”   Played in the Senior Bowl and performed very well.  Will be 24 at the start of Training Camp.  There was a 93% chance Strange would have been available at pick #54.  Worked at Center at the Senior Bowl and struggled with the shotgun snaps.

PFF Draft Guide added some interesting comments about Strange and his outstanding play against Power 5 competition.  “Strange came to Chattanooga a 255- pound defensive end in 2016. It was a long

uphill climb just to crack the 300-pound barrier which he only did in 2020. Still, his tape against the Power-5 competition over the years has consistently been impressive. This past fall against Kentucky he made a statement with a 78.8 overall grade and only one pressure allowed on 38 pass-blocking reps. While he didn’t grade out exceptionally well at the Senior Bowl playing a brand new position in the center, you once again saw his high-end traits from him.  High-end explosiveness out of his stance. Gets on defenders so quickly.   Perfect fit in an outside zone scheme. Some insane cutoffs/reaches on tape.

Plays the position with an uncoachable edge. Loves to somersault defenders.”  Rams reported to have liked Strange and would have taken him at #104, a compensation pick at the end of Round 3.

This Patriots team could not get off the field against the Bills in two games and the Patriots select a Guard they could have had at #54.  Wow.

How Was This Article?
Posted Under: Patriots News
Tags: 2022 Patriots Draft Cole Strange University of Chattanooga

By: Mark Morse
The Offensive Line has been a source of controversy this off-season.  Start with the trade of Shag Mason, which Kristopher Knox of Bleacher Report labeled…
6 hours ago

By: Ian Logue
Seeing Patriots QB Mac Jones work with his teammates as a second-year player is just impressive, as Jones is completely in command of things out…
7 hours ago