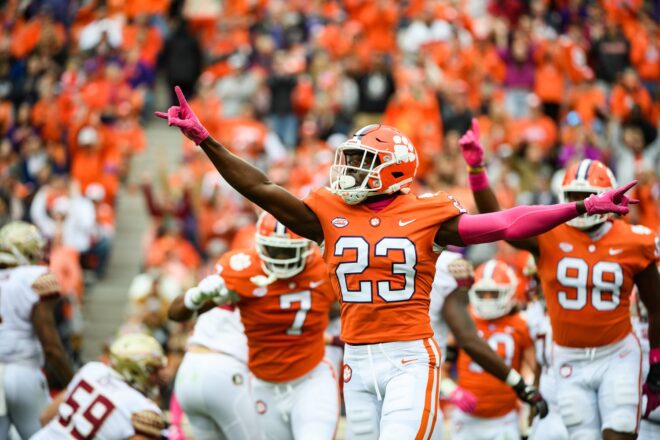 They have the Patriots trading back out of the 21st overall spot, making a deal with Arizona for the #23 overall pick and #215, along with a 2023 third-rounder to allow the Cardinals to select Arkansas WR, Treylon Burks.

From there, Lloyd went next at #22 overall to the Packers, so New England traded back again from #23 after sending that pick and the previously acquired #215 pick to the Buccaneers in exchange for pick #27 and a 2023-third rounder.  Tampa would then select Boston College guard Zion Johnson.

Booth’s name has been another popular potential candidate in quite a few mock drafts, and with Lloyd having been snatched up by Green Bay, he was their next best option given their needs in the secondary.

Here’s what Patriots beat writer, Matthew Fairburn, had to say about the selection:

Matthew Fairburn: This scenario worked out well for the Patriots with multiple suitors emerging for the No. 21 pick. I was able to move back twice and get two 2023 third-round picks in the process. The Patriots gave up a 2023 third in the DeVante Parker deal, so recouping some of that value seemed worthwhile. New England could also be in line for a third-round compensatory pick next year after losing J.C. Jackson in free agency, so this trade would set the Patriots up with plenty of quality picks heading into 2023.

By the time it came to pick at 27, it didn’t feel like the Patriots lost out on much by moving back a few spots. You can make a case that every player drafted from 21 to 26 could fit with the Patriots. Receivers Treylon Burks and Jahan Dotson would be nice pass catchers for Mac Jones. Interior linemen Zion Johnson and Kenyon Green would be plug-and-play starters. And George Karlaftis and Devin Lloyd would bring some life to the Patriots’ linebacker room. But cornerback is still the biggest need on the roster, and Clemson’s Andrew Booth is a natural fit. He played plenty of man and zone coverage at Clemson, showing off top-end ball skills and competitiveness at the catch point. He’s had hamstring, quad and hernia injuries that could hurt his evaluation, but the upside is worth it at this point in the first round.

The former Clemson standout had a strong finish to his regular-season career, which saw him not allow a reception during a 30-0 blowout win on the road at South Carolina.

Booth Jr. reportedly underwent sports hernia surgery earlier this year and sat out the Combine due to a quad injury, with both of those issues appearing to be what has his stock dropping.  However, he was a reliable player for Clemson and he’s tough.  SI’s Mike Santagata took a look at some film and noted that Booth Jr. loves being physical and does exactly what he needs to not only in coverage, but also when making tackles.

Andrew Booth fights through screens as if his life depends on it. Not only does he beat the block, but he also makes the tackle. pic.twitter.com/0Jgp7si3V5

He’s also tough against the run:

Andrew Booth also plays with his hair on fire in the run game. He plays the run aggressively and likes to attack the ball carrier before they can get downfield. pic.twitter.com/Jv5eOhXxnn

Whether or not he ends up here remains to be seen, but he appears to at least have the tools to be a good addition to a secondary that certainly could use some young, talented depth.

(Editor’s Note: Portions of the above appeared in this morning’s Patriots news and notes column.)