Quick Hitters:
Can’t say enough about the league’s “compromise” in regards to the national anthem. Compromise with who? The league and the owners, that’s who. The players, who are the ones most affected by this new policy, weren’t even consulted and involved in the discussions. Bad move NFL.

The NFL loves to throw around the word “partners” when discussing the players. So how in the world can they NOT involve them in the process? Baffling would be the politically correct answer. The Players Association should take note and remind the league about it when the new CBA comes around.

Bill Belichick loves to find new ways to build team cohesion…and to tweak the NFL. Belichick traditionally used the old Chuck Noll tactic of using numberless jerseys for OTAs and minicamp in have the players get to know one another and communicate better on the field.

But the massive uptick in media coverage in the modern game had the league force the Patriots and Belichick to ban that tactic. So, Belichick, this spring had the rookies wear non-traditional numbers for OTAs. Examples? RB Sony Michel wore #51, CB Duke Dawson wore #52, QB Danny Etling wore #58, Braxton Berrios wore #55.

One can expect the league to address this soon as well.

There have been rumors of a contract extension for Rob Gronkowski for awhile now, getting a new deal done will be relief no doubt for the team and the player to keep him around Foxboro a bit longer. Gronk released a shot of him swimming with sharks as part of a Discovery Channel special

All the amateur psychologists were out in force to try to decipher the meaning of Tom Brady’s Instagram post this week. Brady posted a picture of himself practicing and added the caption, “Dreamworks”. Brady was rumored to be working out at the TB12 clinic but that was quickly shot down by Scott Zolak and others.

This weekend we know that he and his wife are in Monaco at the invitation of the prince. It is good to be the King…er the Goat. As to when he’ll be on the field, look for mandatory minicamp June 5-7. I wouldn’t expect to see him out there on May 30-31. 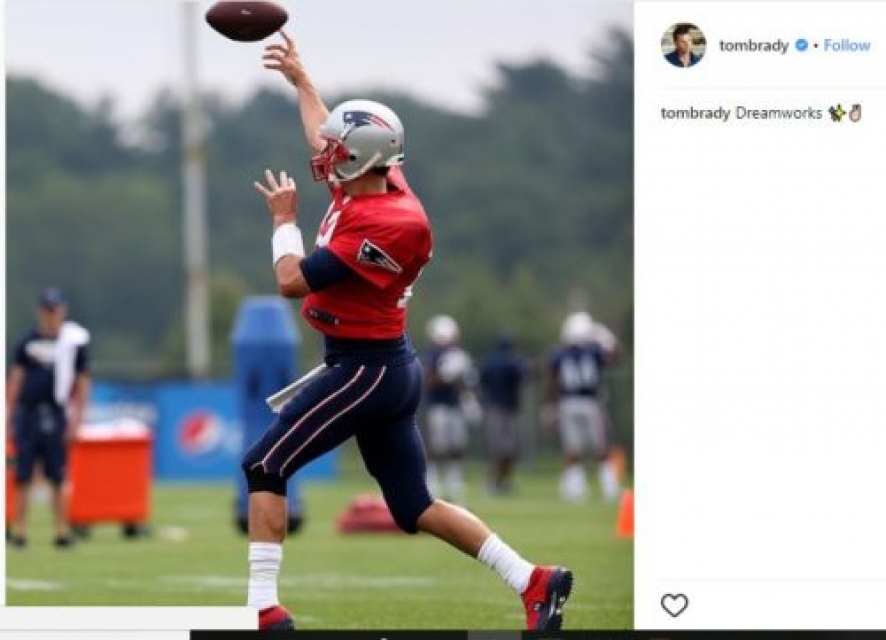 So what about the players on the field?

Wide Receiver Will Be a Great Position to Watch This Summer:
This will be a prime position to watch at both minicamp and training camp this summer. Julian Edelman has been on the field for the OTAs and looks like he hasn’t lost a bit of his quickness. Coming off of a serious ACL injury that caused him to miss all of 2017, that is good news. He and Chris Hogan seemed to be locked into the top two spots on the depth chart.  There,  things get really interesting and that’s where the camp competition will be fun to watch.

Malcolm Mitchell who had such a promising end to his rookie season, also missed the entire season a year ago with knee woes that are looking chronic. He was at Monday’s session and then missed Tuesday’s on-field work. Whether it was injury related or the team just taking a cautious approach will bear watching.

Two guys the team brought in last year will be looking to assert themselves after a full offseason in the Patriots system. Phillip Dorsett was something of a disappointment last year as he didn’t contribute much. He has the advantage of being able to line up inside or outside and with his spot far from guaranteed, he’ll be going all out this spring and summer.

Kenny Britt is a sleeper here. Brought in at the tail end of last year after a miserable 2017 with the Browns, Britt had 1000 yards receiving with the Rams in 2016. He has good size, (6’3, 225) and still runs well. The Patriots need some size at the position and Britt could be a productive player in the system with a solid summer.

Jordan Matthews is a guy that I’m going to make an early prediction and say makes the team. We haven’t seen him play in the Patriots system yet, but he’s learned several different systems already in his career and despite an injury-riddled season in Buffalo, he’s been a very productive receiver in Philadelphia where he averaged 70+ catches over three years there. He too has good size  (6’3, 205) and can operate out of the slot.

Cordarrelle Patterson is probably the most intriguing guy in the group. Patterson has good size, (6’2, 220) and has tremendous speed. He’s the best kick returner in the business right now and a very effective gunner. That alone should make him a near roster lock. With the Patriots ability to insert him in the lineup for some specifically tailored plays designed for him, end-arounds, quick slants, screens, his ability to make something in the open field should be fun to watch.

Braxton Berrios arrives in New England with a ton of hype as the “next Wes Welker” in the Pats offense. He’s small with a very limited catch radius but he has the quickness and better top end speed than Welker did. Where he can secure a spot is in the punt return game. He was working with Julian Edelman on that this week, which is a good sign. He and Riley McCarron will no doubt be competing for a spot either on the roster or the practice squad. Don’t go to sleep on the second year McCarron. He offers much the same value as Berrios without the hype and spent all of last year on the practice squad. He can return punts and is built similar to recently departed Danny Amendola.

Cody Hollister is a super long shot to make the roster and would have to turn heads this summer to remain on the practice squad for another year. He has the versatility to play in different spots on the field as well as special teams.

Matthew Slater is a wide receiver truly in name only. He’s one of the best special teams players in the league, year in and year out. But with so many qualified wide receivers on the squad this year, the team will have to decide whether to keep an extra WR or make some difficult decisions in regards to who to release.

The wide receiver position will be a fun one to watch this summer. With Tom Brady not at OTAs, it gives the younger players an opportunity to gain some level of comfort and build some chemistry with Brian Hoyer and Danny Etling. Why is that important? Because they’ll be mostly getting reps with them once Brady gets to camp and is taking reps with the top WRs on the depth chart.

Helmet Maker with the NFL is Trying to Make Soldiers Helmets Safer:
Not Patriots-related news but on Memorial Day weekend, we salute anything that can make our troops a bit safer.

VICIS, the makers of the new Zero1 football helmet has partnered with the US Army to make the ballistic helmet safer for the men and women in the military. They plan on replacing the foam pads inside the existing helmets with technology from the Zero1 helmet.

While the primary purpose of the military’s helmet is ballistic protection, four out of five traumatic brain injuries occur from blunt impact during training and/or other events. The company believes it will take a year or two of research and testing to begin fielding a new military helmet that makes the troops safer.

Bills: WR Zay Jones Knee Surgery Will Not Sideline Him During Season:
The Buffalo Bills appeared to have dodged a major bullet when WR Zay Jones was forced to have knee surgery last week, but although he’ll miss the remainder of the spring, head coach Sean McDermott said it will not force Jones to miss the season.

“At this point, we aren’t concerned this injury will jeopardize his season,” McDermott told the media. When pressed for return timetable McDermott deferred and , said it was “best for us to get this done now.”

Jones who had 27 catches for 316 yards and a pair of touchdowns in 2017 is expected to be a starter opposite Kelvin Benjamin in 2018. He also had a bizarre episode in Los Angeles this off-season where he appeared naked in an apartment corridor and argued with his brother before he broke a few glass doors and windows. He was not charged with a crime in that incident as the DA declined to pursue charges.

Matthews spent the 2017 season with the Pittsburgh Steelers on Injured Reserve after suffering a season-ending injury during training camp. He tore his patella tendon with the Steelers and then spent the 2016 offseason and training camp with the Cleveland Browns after originally signing with them as an undrafted college free agent on May 5, 2016. Matthews was a three-year starter (2013-15) at Texas A&M, where he played in 40 games with 33 starts.

Matthews isn’t expected to compete for a starting job but to provide depth along the offensive line.

Jets Owner Johnson Says He’ll Pay the Fines For Players in New Anthem Policy:
It isn’t often when you’ll read about us here complimenting the New York Jets on their actions off the field. But this one is the exception.

The NFL on Wednesday approved a new policy that could fine teams if players don’t stand for the national anthem, but the New York Jets chairman and CEO Christopher Johnson told the media that he would pay any fine handed down by the NFL, allowing players to freely kneel during the national anthem with no repercussions or backlash from the team.

“If somebody on the Jets takes a knee, that fine will be borne by the organization, by me, not the players,” Johnson said. “I never want to put restrictions on the speech of our players. Do I prefer that they stand? Of course. But I understand if they felt the need to protest. There are some big, complicated issues that we’re all struggling with, and our players are on the front lines. I don’t want to come down on them like a ton of bricks, and I won’t. There will be no club fines or suspensions or any sort of repercussions. If the team gets fined, that’s just something I’ll have to bear.”