4 weeks ago at 5:00 am ET
Follow @IanLogue
Posted Under: Patriots News 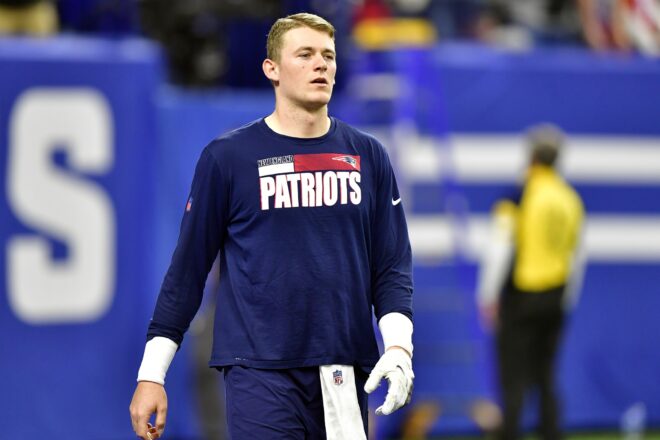 1) The New England Patriots are officially back at work getting ready for the upcoming season, with Monday officially marking the start of the offseason program.  A variety of players appeared at Gillette Stadium, with Mac Jones among the names of Patriots who are in town for the coming weeks to start building toward the upcoming 2022 season.

For the first couple of weeks, players are able to work on their strength and conditioning as well as take part in meetings, with that time being limited thanks to restrictions in the Collective Bargaining Agreement.  But the fact they’re here is obviously a great sign, with Josh Uche, Malcolm Butler and Damien Harris among some of the players photographed by the team as being on hand.

The team will hold OTAs and Minicamps in the coming weeks, with 10 organized team activity practices scheduled along with three days of a mandatory minicamp.  The former are voluntary, although it’s likely most players will be here.  They had a pretty good turnout as it was for day one, with the names listed in the next section below.

As far as any details go, we won’t hear much of anything until later next month when the sessions are opened up to the media.  According to the team’s website, that’s expected to happen around May 23rd through June 17th and will include a portion of the OTA sessions and minicamp practices.

Last offseason was certainly interesting, as the big topic of discussion obviously centered around Jones, who was the player everyone had questions about after being taken with the 15th overall selection in the draft.  As we know, those sessions proved valuable and he ended up soaking up every bit of knowledge before eventually unseating Cam Newton for the starting role by the end of training camp.

This time around, it’s his team and the focus will likely be on whatever new offensive philosophy the team appears to be shifting to after former Patriots fullback Jakob Johnson revealed that the new version of what they’ll be doing won’t include a fullback.  The belief is that Jonnu Smith will be a bigger part of the offense in 2022, albeit we don’t yet know to what extent.

But the fact it’s all beginning again is obviously great to see.  And it means that we’re just that much closer to the start of the upcoming season.

2) As far as who was on hand, the team had a photo montage of who was present, with the following list rounding out who we at least got a visual confirmation of thanks to the team’s official site.

The list is obviously likely much longer, but that’s who appeared based on the glimpse the club provided.  Either way, it’s exciting to see the process get underway heading into the NFL Draft, which will be held in Las Vegas beginning on April 28th. 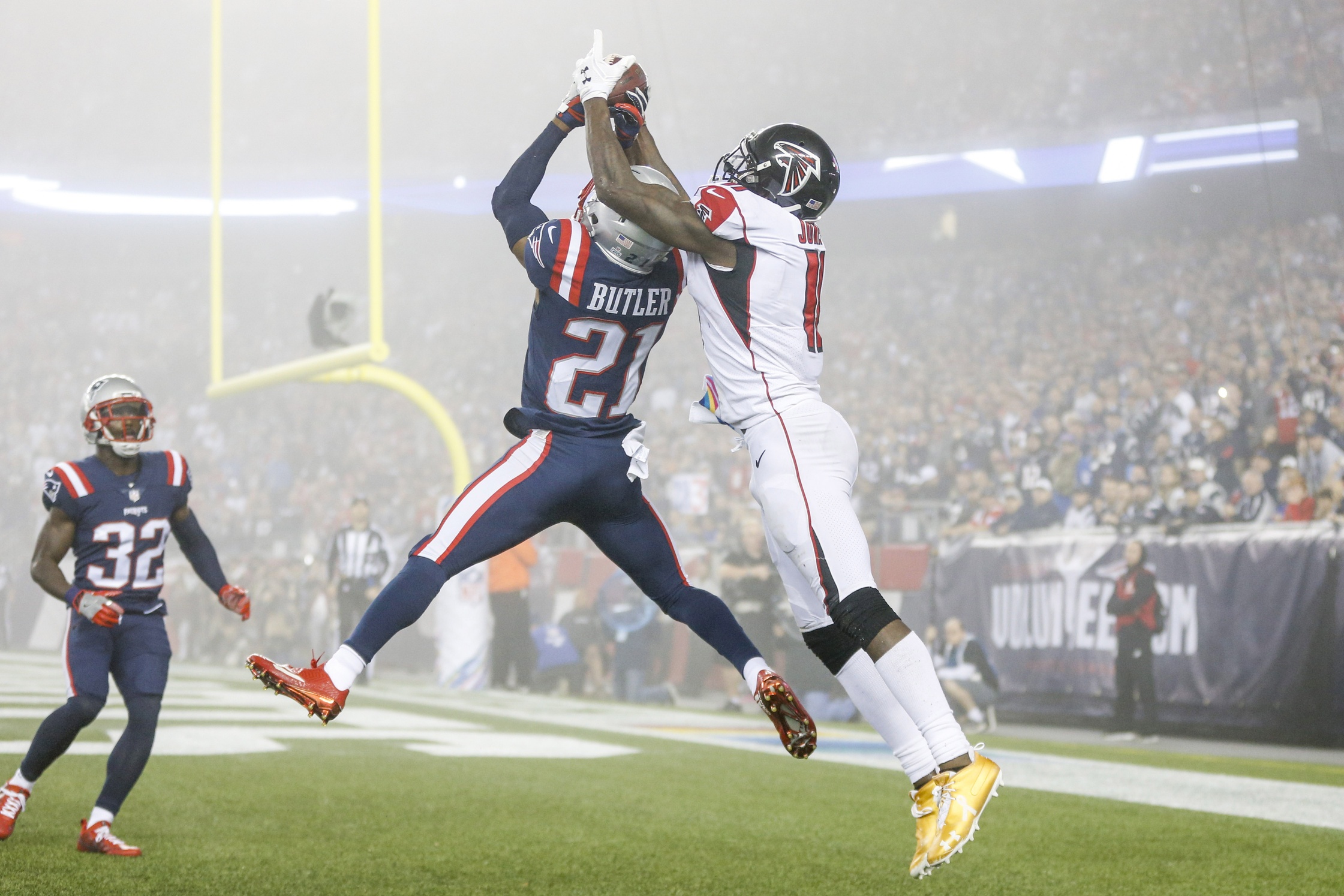 The discussion about what happened that fateful night against the Philadelphia Eagles in the Super Bowl was limited, with Butler not saying much other than admitting that it was in the past and he was focused on the future.

As it is, he’s coming off of a season away from football, which listening to Butler it sounds like he needed some time to get some things in order personally, which seems to have him in a better place mentally.

“If you’re not prepared mentally, you can’t do anything physically, so, I think I made the right decision by doing that.  And I came out of retirement because I love the game of football.  I love the game and I’m blessed to have another opportunity to play, thanks to the Patriots.”

Obviously, given everything that transpired, his return certainly came as a surprise to most of us, with Butler even admitting he was surprised the Patriots were interested.  But one thing he said, and we know this because the mystery was really never solved, was that he handled everything “like a grown-up” and it left an unexpected door open for him to have another opportunity to continue his career.

“I didn’t expect to come back to New England, but I always had respect for the New England Patriots, Mr. Kraft, Jonathan Kraft, Bill Belichick,” said Butler.  “And one thing I learned, man, you never burn your bridges down.  You handle situations as a man, and as a grown-up.  If I didn’t do that, I don’t think I would have had an opportunity to come back here.  So I’m pretty sure I made a good decision by acting like a grown man.”

As for what it’s been like to be back in the building, he said very little has changed.  The demands remain what they are, and he’s just glad to be a part of it again.

“It felt like, I was here yesterday, to be honest.  One thing I know about the New England Patriots, the hard work is still here.  I’m pretty sure I’m going to sleep well tonight.”

4) Peter King had an interesting bit in his Football Morning in America column from Monday, with King getting an opportunity to talk to Duke basketball coach Mike Krzyzewski.  Krzyzewski, who recently retired, talked a little bit about how he changed his approach as he got older, with some of the changes he made sort of going along with the various things we’ve seen from Belichick in recent years here in New England.

“As I got older,” Krzyzewski said, “I allowed more input of expression of teaching from my staff, from the people around me. I was able to see and feel their hunger. I allowed them more opportunity but the person who got more was me. Because I got more of them. … Their ownership of what you’re doing is deepened. The best way to get ownership is to use someone’s ideas or give them the ability, the responsibility. Like in talking to my team and how you, before a game, set up a scout. As I got older, I allowed more and more, more and more. I learned more. It’s a different music, a little bit different music that occurs.

“I’ve always felt Bill had a curiosity about the game. It wasn’t what he already knew. It was what he was still going to learn and how he was going to use what he knew in the ever-changing environment that he’s in. He’s very adaptive. He’s probably learned to use the talents of the people around him even better. Like, the former Detroit Lions head coach [Matt Patricia] And how he’s using him. It’s different than his past, right?”

That certainly seems to be the approach and it paid dividends last year both in the draft and in other areas.  You would think that coaches like Belichick and Krzyzewski would have a tough time giving up control, but it appears that both have known when to start expanding the responsibility of the guys around them.  It’s clearly worked out in their favor for many of them, with the Patriots seemingly seeing a plethora of coaches go on to larger roles thanks to the team’s success.

Nevertheless, hearing Krzyzewski give his thoughts was interesting, and certainly seems fitting.  For a guy who may have now entered his 70s, Belichick still looks younger than a lot of the guys around the league and if he’s planning on stopping anytime soon, it definitely doesn’t appear that way.

5) Down in Tennessee, they had an interesting development after quarterback Ryan Tannehill wasn’t on hand for the first day of voluntary workouts.

Tannehill is reportedly looking for a contract extension that hasn’t materialized yet, which seems to be potentially the reason why he might have opted to not show up.

He’s scheduled to make $29 million this season, but his future beyond 2022 appears to be a question mark.

The veteran quarterback saw his team make an early exit from the postseason after being knocked out of the Divisional round by the eventual AFC Champions, the Cincinnati Bengals, marking the second time his team failed to advance in the playoffs.  He threw three interceptions in that game, with the final one coming in the waning moments as the Titans tried to get into field goal range trailing 19-16.

That one stung as it capped off a frustrating outing for the veteran, who walked off the field that day to a chorus of boos and set up an offseason full of questions.

While it’s a little early to read too much into it, it doesn’t change the fact that he’ll likely be under some serious pressure this season as the AFC landscape has changed quite a bit.  Worse yet, Tennessee’s window is likely closing and how far they can go will clearly depend on whether or not he can get back to playing at the level they need him to play at.

So far, he hasn’t been able to come through when it matters most, which could be why the Titans have yet to make a decision about his future.  Tannehill might be looking at his entire body of work and pondering holding out, but in a “what have you done for me lately?” league that is the NFL, the chances of that working out in his favor probably aren’t very good.

As a result, it remains another interesting situation to follow and given the crazy things that have happened the last couple of offseasons, it’s entirely possible this one could get interesting before it’s over.

By: Robert Alvarez
The New England Patriots pay tribute to team Hall of Famer and broadcaster Gino Cappelletti following news of his passing.
7 hours ago

By: Ian Logue
The NFL released the entire league schedule on Thursday night, which followed a day that saw numerous leaks and rumors on how things might play…
14 hours ago 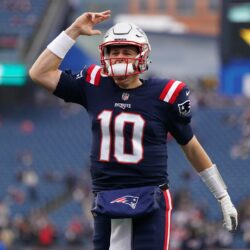 By: Ian Logue
While we're still a ways away from the 2022 New England Patriots schedule being revealed, there have been various leaks that have come out that…
1 day ago

By: Mark Morse
For 18 consecutive seasons, an Undrafted Free Agent (UDFA) has made the opening day roster of the Patriots.  Quinn Nordin, the only UDFA the Patriots…
2 days ago
wpDiscuz