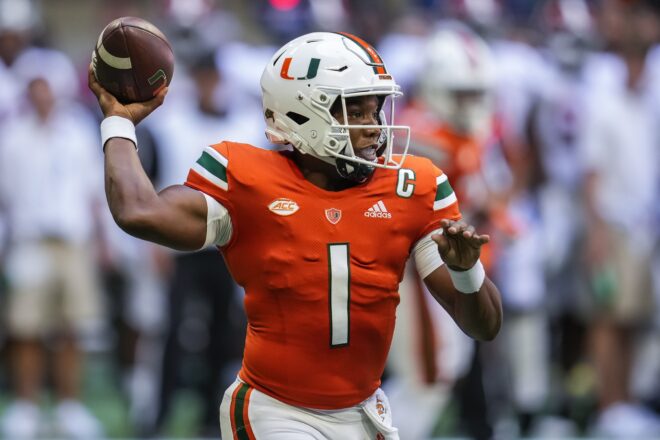 (Editors Note: portions of the below article appeared in this morning’s Daily News/Notes column)

The New England Patriots are continuing to do their due diligence this offseason, including taking a look at a unique player recently.

According to Aaron Wilson of ProFootballNetwork.com, Patriots assistant Joe Judge recently held a private workout with University of Miami quarterback D’Eriq King a few days ago, and they are reportedly also on the list among top-30 visits with the club as well where King will reportedly again be present.

King doesn’t have the prototypical quarterback size as he’s just 5’11”, 195lbs.  But where King excels is in his athleticism, which has seen him gain 2,055 yards rushing the football on 423 carries as well as 32 TDs.  He also reportedly split time at receiver during the early part of his career, with some believing he could become a slot receiver at the next level.  Another interesting fact is that King took part not only in quarterback drills at the NFL Combine, but also at receiver.

Given his size, he seems to be focused on being someone who can do multiple things and as we know, that certainly is important to New England head coach, Bill Belichick.

“The more you could do, the more valuable you are. So if I can be one guy on a roster that can be backup quarterback, receiver, special teams, whatever I can do,” King told ProFootballNetwork.com after the Miami Pro Day. “It’s all about getting the best opportunity to make the roster.”

Obviously, the name that comes up most often when discussing quarterbacks who went on to become receivers for the Patriots is Julian Edelman, who made the transition after being selected out of Kent State in the 7th round back in 2009.  It took him several seasons to eventually emerge as a starter, but he clearly became a huge asset as he was an important part of each of the team’s three championship runs.

Current receiver Jakobi Meyers also falls into that category, as Meyers was also a quarterback at North Carolina State, before eventually becoming a receiver.  He’s been used in several trick plays throwing the football and is currently a combined 4-of-4 for 88-yards and 2-touchdowns over the last two seasons.

Needless to say, the Patriots could be looking to add another guy like that to the mix.  For now, King appears to be someone who is willing to do whatever it takes to help the team win football games and he could be a name that we may want to keep an eye on in the coming weeks.

By: Ian Logue
The New England Patriots finally announced this year's Hall of Fame member, with a popular player getting the call on Tuesday. Former defensive tackle, Vince…
18 hours ago