11 months ago at 5:00 am ET
Follow @SteveB7SFG
Posted Under: Patriots News 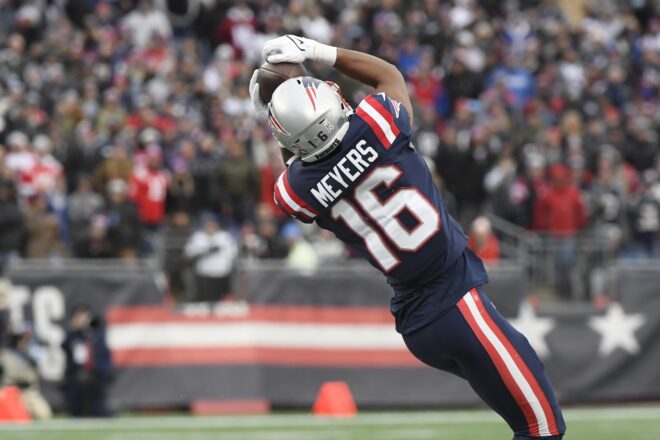 Good morning, here are your weekly Patriots news 03-20 and some NFL notes

With the feeding frenzy of the first wave of free agency over, the next, more under-the-radar phase begins.  This is especially an important time for New England as they’ll be following their own well-known path of waiting for the market to slow down and find options to build the roster.

It is what the team under Bill Belichick has done since 2000. Last year was an outlier, a buyers market with the cap decreasing coupled with a plethora of cap space made it an easy choice for the team to change their M.O. for a year.

However, the level of panic among the fan base, always a constant every year during the early hours of FA, this year has dwarfed every other year within the past two decades. A couple of things to remember are that free agency is just a couple of days old and that the draft is not until next month. And contrary what some people will say (or scream from the Tobin Bridge), is that, yes Belichick has a plan. He does every year and this year is no exception. Just because he hasn’t manifested itself publicly yet, doesn’t denote the lack of one.

It’s only March 20 (actually the 18th as I write this), there are more than 5 months remaining until the season starts. If the roster looked like this on August 18th, then the panic would be justified. Today, not so much.

There is no doubt that the losses of J.C. Jackson, Ted Karras, Shaq Mason, are significant. The offensive line, cornerback, and to a lesser extent wide receiver remain areas that badly need added starters/depth.

Speaking of Karras, rewind to last spring, the team re-signed him after a year in Miami. Another signing was Kendrick Bourne. Both of these qualified then as under-the-radar and “didn’t move the needle”, right?  How did those two signings work out? Not too bad I’d say.  It isn’t about the name, but we’ve been saying that on these pages for more than a decade.

But also, I’d also like to remind people that last year when the Patriots spent big early in FA, there was a lot of talk centering on “teams that are spending freely in March rarely if ever win in December and January”. Curious that today that line of reasoning is forgotten, or conveniently ignored. But it is what it is…time to move on

Today, we are in that next phase of free agency.

Deshaun Watson: Watson threw everyone a curveball and decided to take his talents to Cleveland. But before that, Watson, acting like he’s been cleared of all wrongdoing set out with his agent and basically told NFL teams, “make an offer I can’t refuse.”

While a grand jury opted not to indict him, it isn’t the same thing as clearing him of any wrongdoing. There are currently 22 civil cases ongoing against Watson. But this is the NFL and the hypocrisy runs deep. So, several teams stepped up and Watson and his agent decided on Cleveland.

And the Browns paid through the nose, both to Watson and the Houston Texans. Just a few days after Aaron Rodgers signed the highest guaranteed money contract in league history, Watson signed a 5-year deal, for $230 million dollars, with all of it guaranteed.

Watson is still facing NFL discipline behind the 22 civil suit allegations, and Cleveland obliged by making his 2022 base salary just $1 million dollars. Sends a great message to those who were wronged in the Washington Commanders affair, not that the NFL’s handling of that was sending strong messages.

But for on-the-field factors, Cleveland is noticeably better now with Watson, if he’s allowed to play this season. Houston, who played without Watson a year ago, must now hit on those draft picks to truly cash in. Nick Caserio, the onus is now on you.

Baker Mayfield:  The other part of the equation in the Watson saga. Mayfield was drafted #1 overall and had zero stability, playing for four coaches over a three-year period. He played with a hurt shoulder last season. The Browns wouldn’t commit to him and then flew to visit Watson in Houston.

Mayfield then penned an Instagram post thanking the city of Cleveland, feeling like they had already moved on and requested a trade.The Browns were initially told that Watson had opted out of playing for Cleveland, so they denied Mayfield’s trade request.

Late Friday afternoon Watson changed his mind, however, a Browns’ team source told ESPN’s Chris Mortensen that Cleveland was looking to replace Mayfield “with an adult” at QB, so they signed Watson and are now looking to move Mayfield. Currently, the Colts are reportedly very interested in trading for him after parting with Carson Wentz.

Ja’Whaun Bentley: ESPN’s Mike Reiss and Field Yates were reporting the Patriots were bringing back linebacker Ja’Whaun Bentley. NFL.com later reported that the deal was for two years and worth $9 million. It is a good move to bring back Bentley who is still just 25 and played well last year.

Ty Montgomery: The Patriots signed the seven-year KR/RB/WR after Brandon Bolden left for the Raiders in free agency. While he’s never put up big numbers rushing, receiving, or in the return game, he has the versatility that the Patriots like and can do a bit of all of them. He should provide some insurance for James White as a 3rd down receiver, especially if White isn’t ready to go right away. And he will be in the mix as a kick returner. However, he’s never returned punts so the team will have to have someone else fill that role.

Henry Anderson: The 30-year old veteran has restructured his contract to remain with the team. Anderson’s pay cut from $2.5 million to $1.25 million could be earned back by earning incentives tied to playing time. Anderson was injured early in the season and ended up on IR with a pectoral tear that cut short 2021.

That $1.25 million will be added to the team’s salary cap which is currently $12.44 according to @patscap, Miguel Benzan but doesn’t take into consideration the deals for Ja’Whaun Bentley and Ty Montgomery.

Gunner Olszewski: The Steelers signed the former Patriots returner to a two-year $4.2 million dollar deal after the Patriots failed to offer the RFA a tender. Olszewski was an All-Pro KR in 2020, but never developed into a viable wide receiver.

Patriots 4th & 2 Podcast: If you haven’t checked out our PatsFans.com podcast, “Patriots 4th & 2” in a bit, please check it out. Derek and I discussed the first week in free agency.

The Patriots have some holes to fill on the roster, let’s take a look at the biggest positions of need. The Patriots spent the majority of the first week signing some of their own free agents, making two minor moves for free agents, and swinging two trades, with only one of those bringing in a player.

A year ago, the team had Stephon Gilmore, J.C. Jackson, and Jonathan Jones as their top three CBs with Jalen Mills brought in for depth. Gilmore was traded last year, and the Patriots opted not to franchise tag J.C. Jackson, and he cashed in, signing a 5-year, $82 million dollar deal, frontloaded with $40 million guaranteed.

The team will get back Jonathan Jones from his shoulder injury but for the time being have boundary corners consisting only of Jalen Mills, Shaun Wade, Myles Bryant as well as Joejuan Williams. So, they need a big influx of talent at the position.  They added former Texan Terrance Mitchell but it isn’t nearly enough. A best-case scenario would have them sign another veteran free agent and then draft another corner.

There isn’t anyone in FA that is going to blow you away but a couple of players still out there are former Eagles CB Steven Nelson and former Bronco Chris Harris Jr. We’ll begin our draft profiles beginning this week and have some names to look at as a fit for the Patriots. They include Andrew Booth, Clemson, Washington CBs Trent McDuffie, and Kyler Gordon, Florida’s Kaiir Elam, and others.

Lots of more question marks need to be answered here after the first week of free agency. The team lost LG/C Ted Karras to Cincinnati and traded RG Shaq Mason to the Bucs for a 5th round pick. Last week we wrote here that Mason could be trade bait, as he counts $10 million against the cap, but expected a bit more in compensation.

With RT Trent Brown still a free agent, the Patriots need a LG and RT, while the right guard should be filled by Michael Onwenu who started in 2020, and is another guy who “didn’t move the needle” but paid dividends.

They currently have Justin Herron, Yasir Durant, Yodne Cajuste, and last year’s rookie Will Sherman round out the roster. CLNS’ Evan Lazar reported that the team is among several vying for Bills RFA Ryan Bates, who can play anywhere along the line. This is another position that they should address in the draft.

With Jakobi Meyers being given a 2nd round tender, he should likely be back in 2022, and with Kendrick Bourne, Nelson Agholor, and N’Keal Harry the Patriots while hardly stacked, are not completely bereft here.

Fans were clamoring for Amari Cooper, Allen Robinson, and others but they couldn’t compete in that market. One guy who would definitely fit what they need in the short term would be slot WR Cole Beasley, who was released by Buffalo on Thursday. Yes, it isn’t the sexy signing, but it would immediately pay dividends.

The draft is chock-full of quality WRs and we’ll be profiling several in the coming days.