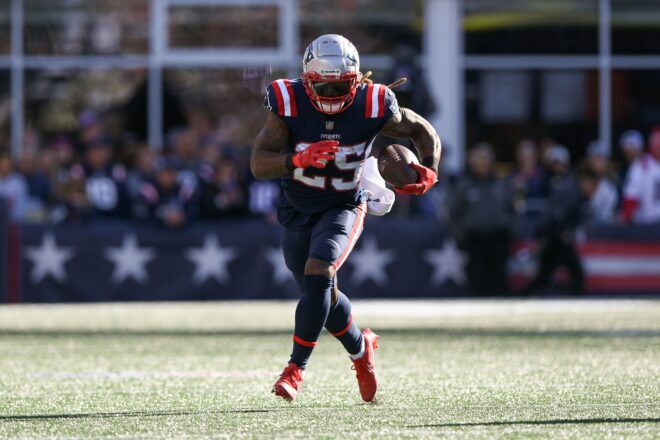 It looks like a big contributor for the New England Patriots is taking advantage of free agency and heading west.

According to the NFL Network’s Ian Rapoport, Patriots running back Brandon Bolden is set to reunite with a familiar face in former Patriots offensive coordinator Josh McDaniels along with GM Dave Ziegler out in Las Vegas and is expected to sign with the Las Vegas Raiders.

Bolden, who became an unrestricted free agent this offseason, had a career year in 2021 after stepping in on offense for an injured James White.  White went down early in the season with a hip injury early in the second quarter during the Patriots’ Week 3 loss to the New Orleans Saints.  White recently re-signed with the team on a 2-year deal, which likely meant Bolden’s time as a third-down back was obviously over, leaving him to go back to another year as a backup, as well as his role on special teams.

The veteran did a terrific job in the Patriots’ backfield during White’s absence, finishing with a career-high 45-receptions  for 432 yards and two touchdowns.  He caught 20-of-23 targets on third down last season, finishing with 11 first downs including his two touchdowns.  He also finished the season averaging 5.1 yards-per-carry (also a career-high in years he’s had 15+ carries) after carrying the football 44 times for 226 rushing yards along with a touchdown.

He was a nice change of pace for a backfield that saw strong seasons by both Damien Harris and rookie Rhamondre Stevenson, with the Patriots’ ground game being one of their key assets behind quarterback Mac Jones.

His departure hurts them not only on offense, but they’ll also have to find a way to replace his contributions on special teams.  New England also opted not to tender restricted free agent Gunner Olszewski on Wednesday, which now potentially leaves them with two voids on special teams heading into 2022.