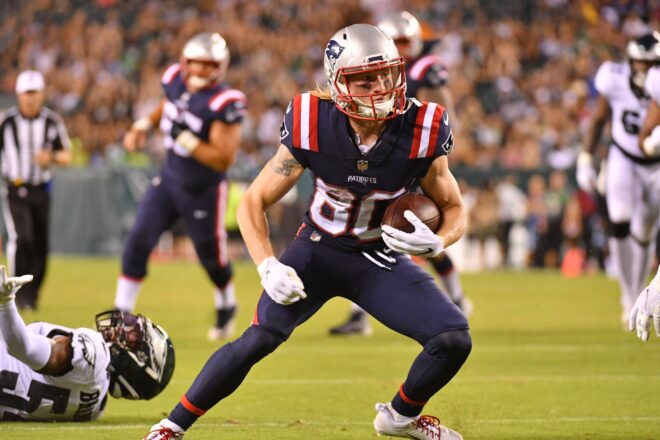 Some interesting news on Wednesday after ESPN reporter Mike Reiss revealed that New England Patriots All-Pro kick returner, Gunner Olszewski, may be about to hit the open market as an unrestricted free agent.

According to Reiss, Olszewski has been informed that the restricted free agent will not be receiving a tender offer from the club, which will make him a free agent at 4pm ET.  That will allow Olszewski to potentially sign a new deal elsewhere, which could ultimately spark a change for who the Patriots may have returning kickoffs and punts in 2022.

The former undrafted player from Bemidji State joined the club in 2019 and caught everyone’s eye with his high energy and quickness in the return game.  It didn’t take long for him to earn his role on kick returns and he’s returned every one of them like his hair was on fire, which has made him a fun player to watch during his tenure in New England.  He’s also filled in at times on offense as a wide receiver, with Olszewski hauling in 2 receptions for 31-yards last season, both of which went for first downs.

Olszewski certainly made his mark since coming into the NFL and becoming New England’s primary kick returner.  As Reiss pointed out, he currently holds the Patriots’ franchise record in punt return average after finishing with a team-best 17.3 punt-return average in 2020.

How Was This Article?
Posted Under: Patriots News
Tags: Gunner Olszewski