1 year ago at 5:00 am ET
Follow @SteveB7SFG
Posted Under: Patriots Report Card 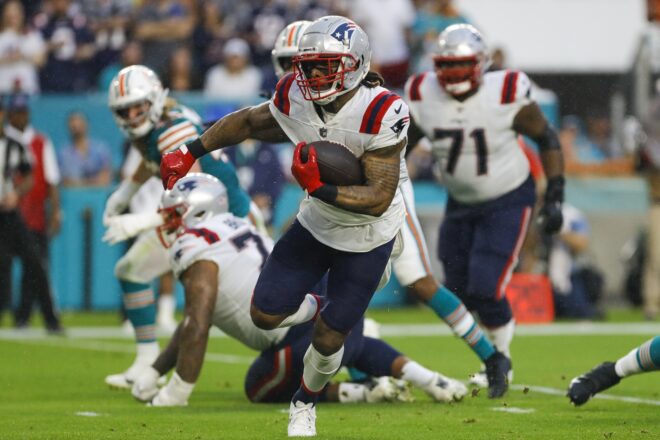 Once Again, A Terrible Start Undoes the Team

The Patriots entered the day still with a chance to win the division and the early returns from Buffalo looked promising. The Jets were hanging with Buffalo, but the Patriots once again didn’t show up until they were three scores down, falling into a 17-0 deficit before they finally decided to start playing.

Spotting any team 17 points in the early going is a recipe for disaster and Sunday was no exception. Two turnovers, one a pick-six, poor special teams play, and an offense that isn’t built to come from behind by three scores set up the inevitable.

But the story isn’t on the struggles of Mac Jones the Patriots rookie QB. The defense is supposed to be the strength of this team. But once again, a recurring event in all of the Patriots’ losses reared its ugly head. The defense started off poorly allowing an easy touchdown right off the bat, and once the team was way behind, tightened things up in quarters 2-3. But when the offense clawed their way back in the game, the team needed the defense to make a stop and give the offense the opportunity to win the game. They didn’t and gave up key first downs which ate up all but a few ticks on the clock.

So, here are our positional grades this week for the Patriots-Dolphins game. There was disappointment in how the team once again let an opportunity slip away with poor discipline, bad penalties, and far too many mistakes. Many of the grades reflect that.

Mac Jones started off horribly, his first pass attempt, he misread the Dolphins’ coverage and Xavien Howard read the play perfectly and he jumped the route and picked off Jones returning it for a touchdown.  What made it worse was that Miami had just chewed the Patriots defense up for an opening drive score. In the blink of an eye, it was 14-0 and the team had dug themselves into a hole they wouldn’t crawl out of.

Jones later had another turnover when Ted Karras came in at center for David Andrews for a few snaps due to an equipment issue. Jones and Karras had a bad connection and a scoring drive was undone by the fumbled snap.

But it wasn’t all bad. Jones completed 20-30 for 261 yards (8.7 yards per attempt) with 1 TD and 1 INT for a passer rating of 91.1. He finished on a good note completing 12 of his final 15 passes to pull the Patriots within three. He also had four completions of 25 yards or more, two to Jakobi Meyers and two to Hunter Henry (no surprise there). 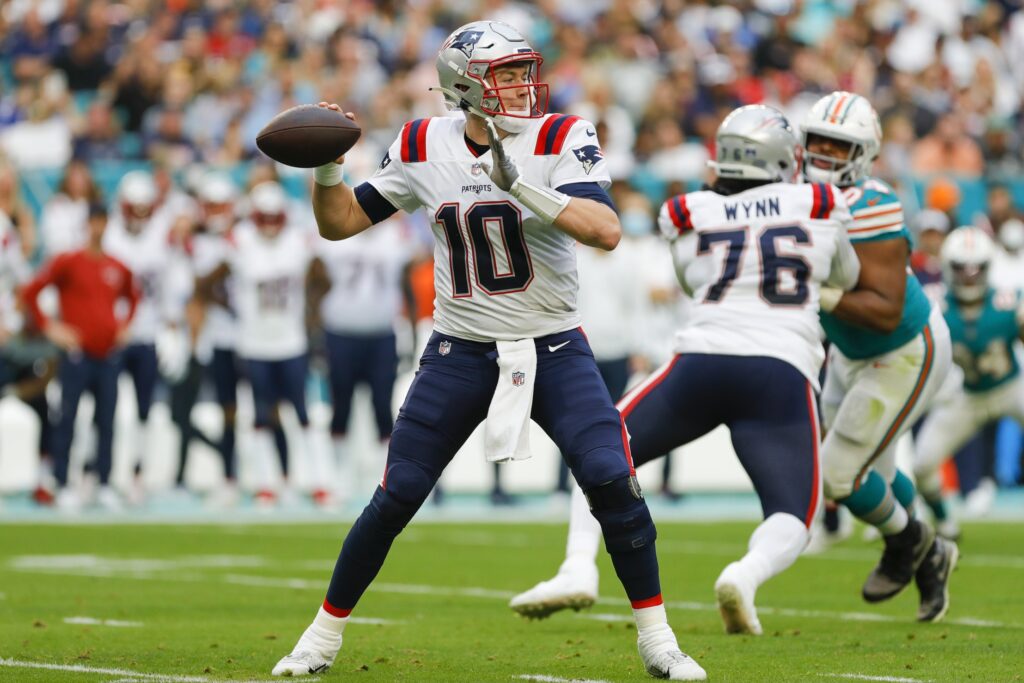 Brandon Bolden had a nice day with a team-leading 46 yards on seven carries (6.6-yard average). He scored on a really nice touchdown run for the Patriots’ first score showing some great vision and cuts. He also added a nice 18-yard touchdown reception.

Damien Harris ran for 37 tough yards and added 36 more through 4 receptions. Rhamondre Stevenson missed most of the game with a head injury but chipped in 34 yards on just 4 carries (8.5-yard average).  Once again, the running backs did their job on Sunday and weren’t the cause of the team’s woes.

Jakobi Meyers was once again the go-to guy for the wide receiver group grabbing 4 catches for 70 yards including a nice diving catch and the deep 39-yard pass from Jones. But despite his efforts, the rest of the group didn’t fare as well.

Nelson Agholor returned after missing two games with a concussion and had one catch for 23 yards. Kendrick Bourne had an off game, catching only three passes for 24 yards. He was flagged for a penalty, and on a 3rd down play, he ran the wrong route, mirroring Agholor across the middle and was given a talking to by the QB. N’Keal Harry was targeted once.

Hunter Henry ended the regular season in fine form catching 5 passes for a game-high 86 yards including a 35-yarder that was nicely designed and executed, as he dove for the pass and hauled it in beautifully. He’s been a huge addition to the passing game, and along with Meyers, the most reliable targets for Jones.

Jonnu Smith, who had five receptions against Miami in the season opener wasn’t targeted.

The offensive line had an up and down game. Jones was pressured 10 times but only sacked twice, but he frequently had to scramble to avoid pressure. However, facing a blitz-heavy team like Miami is tough, and then to lose their left tackle, Isaiah Wynn was even tougher. Justin Herron came in but was turnstiled by Andrew Van Ginkel for a sack.

But the OL did a good job of blocking in the running game, as the team averaged 5.0 yards per carry. So, it wasn’t a bad day. It wasn’t a great one either, but they held their own.

The defensive line was facing the 31st ranked rushing team in the NFL. Miami entered the game averaging 85.8 yards per game on the ground. And the Dolphins gashed them for 195 yards and 4.5 yards per rush on the day. Sound familiar? In late December last year, Miami gashed the Patriots for 250 yards.

They couldn’t stop the run and they weren’t getting nearly enough pressure on Tagovailoa. He was sacked only once and hit only once. And this was going against a subpar offensive line.

The linebackers were missing Dont’a Hightower but they weren’t helping much in the running game. They did get good pressure from the linebackers and the only sack the Patriots got came courtesy of Kyle Van Noy, who also had a tackle for loss.

Jamie Collins had a solid game in coverage. Ja’Whaun Bentley had 17 tackles. Matthew Judon’s streak of quiet games continues. He had one tackle for a loss but was flagged for roughing the QB.

The secondary play was, on paper, excellent. They only gave up 109 yards passing and 5.0 yards per pass, which is typical of Tagovailoa’s short game. But for a lot of the game, it didn’t pass the eye test. On the Dolphins’ first drive, Tua was 7-7 for 54 yards and a touchdown. After Jones’ pick-six, Miami didn’t have to pass much.

Without Kyle Dugger, and Myle Bryant the secondary was thin, but they held up for the most part after that first drive. But the dropped interception by Devin McCourty was a big swing. Instead of having the ball in plus territory, Miami ran a fake punt where a horrible penalty was called on Bolden. That resulted in an additional three points for Miami. 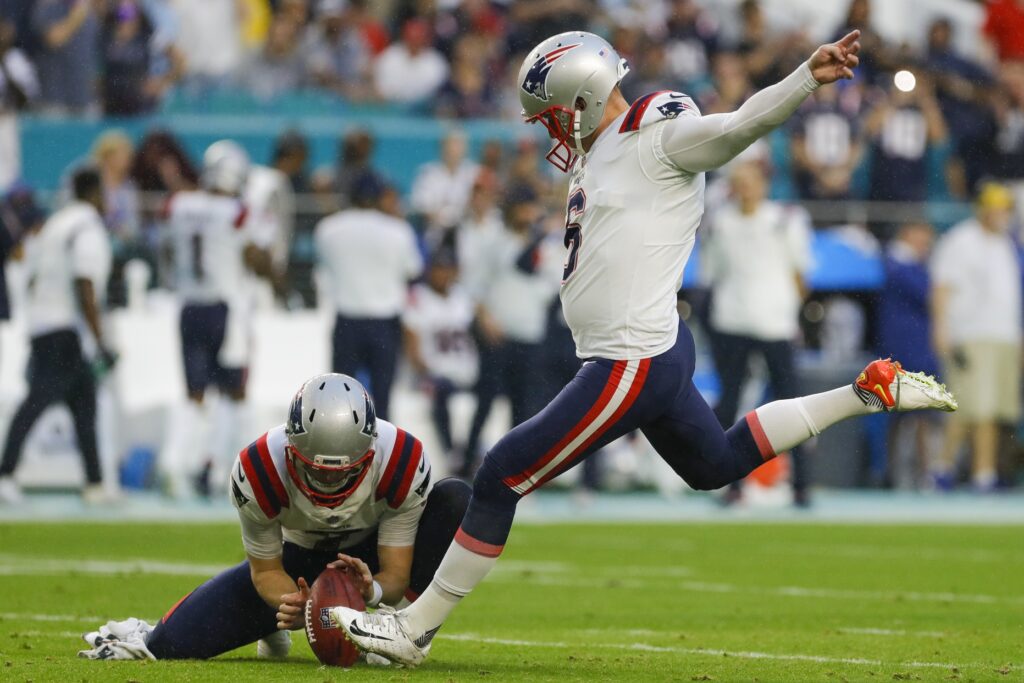 Nick Folk has been outstanding this season for the Patriots’ STs. (Sam Navarro-USA TODAY Sports)

The Patriots’ Special Teams with the exception of Nick Folk have been a disappointment for much of the season, despite signs that it may have been turning a few games ago. Sunday was no exception. Lawrence Guy lined up over the center giving Miami a free first down. That’s been a rule for about 10 years now. The return game is still stuck in neutral and Gunner Olszewski who was an All-Pro a year ago has taken a step back. He let a Miami punt roll for 63 yards instead of fielding it.  Ditto for Jake Bailey.

The fake punt penalty on Bolden was terrible, he missed Miami punter Michael Palardy but it is what it is. But it also didn’t influence the overall grade. This has been a season of blocked punts, missed extra points, busted coverages, ill-timed penalties, poor returns, and overall execution.

The Patriots once again started off slowly falling into a double-digit deficit. It has been a recurring problem in nearly every loss this season. Is it a player’s issue? Only in the fact that they aren’t executing when the game starts. This isn’t a great team, but it is far from a bad one as well. So, it falls on the coaching staff.

They were ill-prepared and regardless of how well they fought back, it puts an offense that isn’t suited for coming back from a big deficit in a bad way, especially with a rookie quarterback. The coaches did a poor job of getting them ready to start the game.