1 year ago at 6:30 am ET
Follow @SteveB7SFG
Posted Under: Patriots Commentary 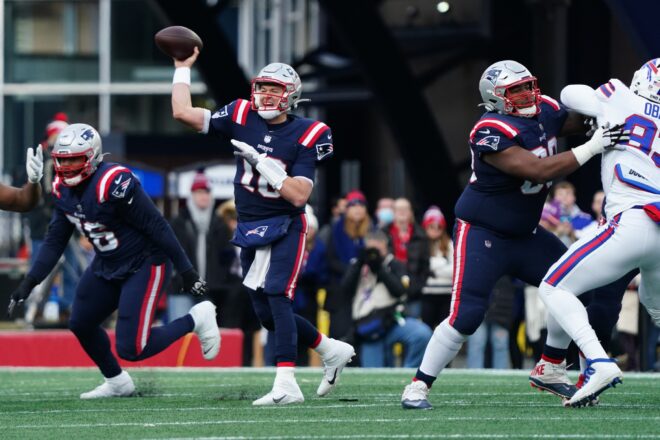 Things change quickly in the NFL and for the Patriots things have gone south quickly. Two weeks ago, the Patriots were the #1 seed in the AFC with a two-game lead over Buffalo and many members of the fan base were openly talking about Super Bowl aspirations. Buffalo was reeling and members of their media were questioning whether they would even make the postseason.

Bills players were questioned if they were embarrassed after being pounded by the Patriots in Buffalo. Now the shoe is on the other foot. After the Patriots suffered bad losses to the Colts and the Bills, the Patriots have dropped all the way to the #6 seed, Buffalo now controls the division and with games against Atlanta and the Jets…well don’t expect much help coming from that direction.

Once again the Patriots got off to a terrible start in the first half and the Bills raced out to a 17-7 halftime lead that at the time seemed like a much bigger lead than it was on the scoreboard. Stefon Diggs summed up the day for Buffalo when after beating J.C. Jackson for a TD was picked up by on-field audio by yelling at fans, “You, you, you, shut the f**k up!” Indeed.

As we pointed out in our keys to the game and our podcast, the Bills were going to put the ball firmly in Josh Allen’s hands and he didn’t disappoint. He picked the Patriots defense apart passing for 314 yards completing 30-47 passes with 3 TDs and adding 64 yards rushing as Buffalo’s leading rusher. He too was picked up by audio leaving the field yelling to teammates, “I don’t know who the f**k they (Patriots) thought I was?”

Allen and the Bills offense were the first team in 474 games since Bill Belichick took over as a head coach that they didn’t punt…once. The only “stops” the Patriots’ defense got was when Diggs dropped a TD in the endzone on a 4th and goal from the two-yard line and the Bills running the ball out to end the half and last-minute game kneel-downs.

“I wish I knew,” captain Devin McCourty said when asked about the defense’s poor play for the past two games. “It’s too late in the season not to play your best football. And I would say these last two weeks have come down to that.” It didn’t help the secondary that the pass rush was MIA again.

For the second week in a row, after a terrible start, the team clawed and scratched their way back into the game and with just under 7 minutes to go were down just 5 points, 26-21. A stop by the defense would give them a chance to take the lead.  And for the second week in a row, they were gashed for a touchdown. There was a prime chance to do just that. Allen, who was spot on all day, airmailed a throw to Diggs on the sideline and right in the hands of J.C. Jackson. It could have been a big turning point in a game that the Patriots had no business winning. But for the second time in the game, Jackson dropped a would-be interception, he had another drop of a potential pick earlier in the game.

Meanwhile, the offense of the Patriots wasn’t holding up their end of the equation. The first half other than their second drive wasn’t what one would expect for a team that was playing to take a stranglehold on the division.

Mac Jones finished 14-32 for just 145 yards with 0 TDs and 2 INTs. After the Patriots tied the game at 7-7, Buffalo dominated the second quarter to score 10 points for a lead that they would not relinquish, while throwing different looks at Jones, confusing the rookie quarterback holding him to just 2-9 in the pivotal session before the half.

They did it by taking away Hunter Henry, one of Jones’ favorite targets and easily his most favorite in the red zone. Jones targeted Henry six times completing just one pass for nine yards. They put Henry and Jonnu Smith essentially on the proverbial milk carton. Drops by N’Keal Harry and Brandon Bolden hurt. The first interception was tipped on a nice play by LB A.J. Klein which deflected the trajectory and then hit Harry and bounced straight up. The second pick was a desperation Hail Mary heave deep in Buffalo’s zone that was easily picked.

The only bright spot of the Patriots’ offense was RB Damien Harris who returned from a hamstring injury to rush 18 times for 103 yards (5.7-yard average) and 3 TDs.  The Patriots rushed for 149 yards and averaged 5.5 yards per carry. Buffalo didn’t shut down the run, but this time around, the Patriots weren’t playing from ahead and they weren’t able to keep running the ball to control the tempo.

But was arguably the most frustrating was the fact that the coaching staff didn’t adjust. Early in the game, the linebackers were dropping deep 10-12 yards and giving Allen far too easy pitches and catches underneath. As a result, they were getting a consistent 8-9 yards on first down.

The other was in the case of Isaiah McKenzie who just killed the Patriots with 11 catches for 125 yards and a score. McKenzie had a career day (his highest before today was 65 yards) by running crossers that Myles Bryant seemed just unable to stop. Bryant, who shined in the first meeting in Buffalo was getting roasted and the coaches just kept him out there and didn’t offer any help that was visible on the tape.

The Patriots finish up the season with a home finale against the 2-13 Jacksonville Jaguars and then on the road to Miami to face the 7-7 Dolphins. With a win against the Jags and a Miami or Las Vegas loss, the team would clinch a playoff berth. If the postseason started today, the Patriots would travel to Cincinnati to face the Bengals.

But a lot could change in a couple of weeks.