1 year ago at 9:00 am ET
Follow @SteveB7SFG
Posted Under: Patriots News 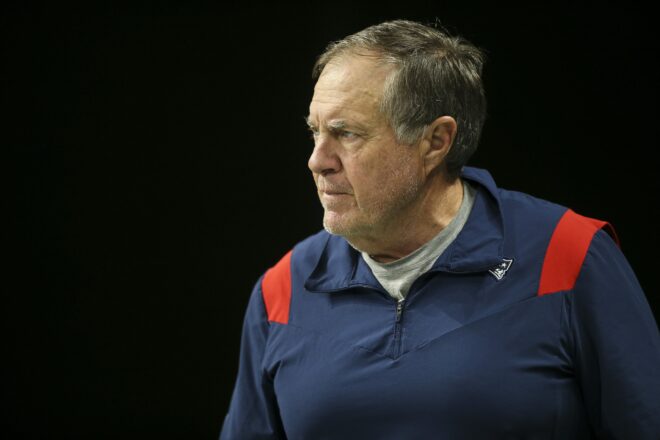 The Patriots’ loss to the Colts cost the team dearly as they would have regained the #1 seed in the AFC and dropped them to the #3. But if Buffalo wins today at home against Carolina, then next week’s game in Foxboro will be for control over the division.

Jakob Johnson: The Patriots and owner Robert Kraft honored Johnson, who joined the Patriots via the NFL’s International Pathway Program and spent training camp in 2019 as a roster-exempt 91st player. Johnson has played over 1000 snaps in his career and has carved out a nice role as the Patriots blocking fullback.

“Look what he has done. He’s worked hard. He’s really gotten the respect of everyone. He’s had such progress.”

Mac Jones: The Patriots’ quarterback had a rough outing at the hands of the Colts defense, making two critical mistakes, especially the interception at the end of the first half where the Patriots were in a prime position to score points. But he showed some resiliency and picked things up in the 4th quarter leading the team to 17 points but ultimately falling short.

He did make some nice downfield throws to Jakobi Meyers (which was dropped) and to N’Keal Harry for 43 yards. He made some rookie mistakes, but we’ll see how he reacts and learns from it as the team returns home for a pivotal game against Buffalo.

Patriots 4th & 2 Podcast: If you haven’t checked out our PatsFans.com podcast, “Patriots 4th & 2” in a bit, please check it out. We gathered on Friday to talk about the Colts game and news around the league.

The NFL Postponing Games, Changes Slate Due to COVID-19 Outbreak:

If you enjoyed Tuesday football last year during the COVID-19 pandemic, then the recent surge, then you’ll be happy with the news this week that there will be football every day from this Saturday until next Sunday with the exception of Wednesday and Friday. Due to a surge in positive COVID cases, several games will be moved to next week, and it will cause some of the teams to have a very short week.

Instead, the three games will be moved to next week:

The Browns, the Rams, and the Washington football team have all had several COVID-19 positive tests and forced the league to once again rearrange their schedule. Cleveland will play on Monday night and then turn around and travel to Green Bay for a Saturday night game.

The NFL released the following statement in regards to the postponements:

We have made these schedule changes based on medical advice and after discussion with the NFLPA as we are seeing a new, highly transmissible form of the virus this week resulting in a substantial increase in cases across the league.

We continue to make decisions in consultation with medical experts to ensure the health and safety of the NFL community.

The Patriots And Germany Are Continuing Their Marketing Ties:

The Patriots announced via the team website that as part of the National Football League’s International Home Marketing Area (HMA) initiative, the Patriots were awarded Germany as their international home market. For the next five years, this program will allow the Patriots opportunities to open up a bevy of financial avenues in Germany.

“When it comes to international markets, Germany has always had the most passionate fan base for American football,” said Patriots owner Robert Kraft. “We have worked hard to grow our global fan base since I bought the Patriots in 1994 and we have had the good fortune of exponential growth in Germany since drafting Sebastian Vollmer in 2009, a German native who enjoyed an 8-year Patriots career and retired a two-time Super Bowl champion.

“Our popularity has continued to grow with the addition of Jakob Johnson in 2019. With this new NFL initiative, we are eager to engage with fans in Germany in new and creative ways and can’t wait to play a game there.”

Vollmer and former NFL player Markus Kuhn teamed up with German networks to broadcast games from the U.S. to Germany. The Patriots were the first team to post content on their website in German.

It will be interesting to see if the NFL, which already plays games in London, schedules any games in Germany down the line.

The slate of games for Week 15 and my predictions straight up for this week.

Panthers to Use 2-QB System Against Bills:

The Buffalo Bills are home today against the Carolina Panthers and Panthers head coach Matt Rhule has stated that he’ll use a rotating QB system against the Bills today. Cam Newton will start but they’ll also play P.J. Walker at times, in the two-minute or hurry up offensive situations.

Newton was signed to a one-year, $6 million dollar deal after QB Sam Darnold went down with a shoulder injury earlier this fall. However, Newton has struggled and this isn’t a game plan specific plan to utilize two excellent QBs. At this point of his career, Newton and Walker are not viable QBs, and it shows just how desperate Carolina is. That has to be good news for a Buffalo defense, eager to put last week’s loss behind them.

Newton admitted that the offensive struggles need to start with him while speaking with the media this week. He’s had multiple turnovers and was asked about his own comfort level with the Panthers’ offense.

“I’m very comfortable,” Newton said when asked whether he felt more comfortable in the offense since the bye week. “I came in comfortable. I think that’s the issue. We need to start playing with a sense of urgency. And that’s starting with numero uno, myself. And I plan on playing with that.”

The Dolphins placed wide receiver Jaylen Waddle on the reserve/COVID-19 list Thursday, their fifth player to go on the list in the past week as the outbreak of the virus league-wide has hit Miami hard as well.

Waddle joins running backs Myles Gaskin, Salvon Ahmed and Phillip Lindsay on Miami’s reserve/COVID-19 list. With the game against the Jets today, Miami will be missing its rookie WR who leads the team in receptions (86), yardage (849) along with 4 TDs.

Safety Javon Holland was activated off of the COVID list but remains questionable for today’s game. Miami can get back to .500 with a win over the Jets and are still in the playoff hunt, although they have to almost win out to make the post season.

“How do you explain the unforced errors?

What’d you see on the blocked punt?

What did you guys learn from tonight?

Were you pleased with the fight you showed in the fourth quarter?

“We have to do everything better than we did tonight.”

Did you get an explanation from Referee Carl Cheffers on the ejection?

“You should talk to (Referee) Carl (Cheffers). Don’t we have a pool reporter who goes and talks to him, right? Go talk to him. He’s the one who made the call. Talk to him about it. I’m standing 50 yards away.”

Bill Belichick was not in a good mood after the Patriots loss to Indianapolis on Saturday night and his answers to questions in his post-game presser (via Patriots.com)