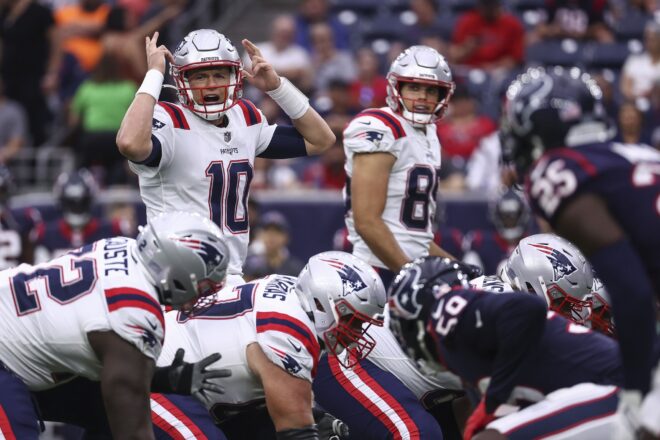 It’s a Saturday Night Special with the 7-6 Indianapolis Colts taking on the #1 seed 9-4 New England Patriots.   The Colts are one of the most complete teams in the NFL and I really don’t know why their record is just a shade over .500.   I’ll take that back, they started off horribly going 1-4 in the first 5 games.  They lost the 1st two at home.  Sounds like the Patriots start, except the Patriots played better teams and played them tough.  Both teams are coming off their bye week so the only advantage is that Indy is playing at home in the dome.

Quarterback – Carson Wentz has had a great running game which has taken the pressure of him and the passing game.  His numbers, 266 completions on 420 attempts (63.3%), 22 TDs, and 5 INTs are similar to Mac Jones.  He has been sacked 22 times which is the 4th best in the league.  Sam Ehlinger is the backup.

Offensive Line – This is the real strength of the Colts.  They are very good led by LG Quenton Nelson who is in his 4th season and has been a Pro Bowl and All-Pro all three previous seasons.  He is the rock you build a championship O-line upon.  Eric Fisher is a 2 time Pro Bowl OT who was drafted #1 overall by Kansas City in 2013.  He tore his Achilles in the AFC Championship game last January and signed a one-year contract with Indy to replace Anthony Constanza at LT.  He can be beat one-on-one on the outside by a speed rusher like Matt Judon.   OC Ryan Kelly is in his 6th year out of Alabama and is expected to play on Saturday night.  RG is manned by 7-year vet Mark Glowinski from West Virginia.  RT is the responsibility of Braden Smith is a 3-year vet from Auburn.  Julien Davenport and Chris Reed are the primary backups.

The Colts defense gives up 118.8 yards per game on the ground and an average of 4.6 yards per carry.  However, their run defense has been better recently.  Their defense is still ranked within the top 5 because their takeaways are 2nd in the league.  They allow 21.8 Points Per Game (9th) and 342.1 yards per game (13th)

D Line – DT DeForest Bucker leads the D line in tackles with 51 tackles and 5.5 sacks.  He is a force to be identified and a matchup that will be key for the Patriots.  Grover Stewart has 38 tackles from the other DT position.    Defensive End Al-Quadin Muhammad chips in with 37 tackles and 5 sacks.  Kwity Paye is this year’s 1st round pick out of Michigan and plays the other DE.

Linebackers – The strength of the Colts’ defense is their LB.  Darius Leonard is the leader.  The 4th year player is the former Defensive Rookie of the Year in 2018, two-time All-Pro 1st team, and Second Team All-Pro in his three seasons.  He is 2nd on the team in tackles with 97.  MLB Bobby Okereke is a 3rd year pro from Stanford.  The undersized (6’1” 235 lb) backer leads the team in tackles with 107.  He is that new type of LB in the mold of Kyle Dugger.   Zaire Franklin is listed as the Strongside Outside Linebacker, but he was added to the COVID-19 list on Monday and is likely out for Saturday night.  Matt Adams is the probable starter.

Secondary –   Xavier Rhodes is an excellent shutdown CB but he has missed time this year.  Healthy now, he has 31 tackles in 10 games with an INT.   The other CB is Rock-Ya Sin.  He has 25 tackles in10 games and no INT.  Isaiah Rodgers is the nickel back and he has 29 tackles.  The big play player in the secondary is Kenny Moore.  He is the leading tackler in the secondary with 77, added a sack, 11 Pass Breakups, and 4 INT.

With Rodrigo Blankenship on IR, the Colts added former Chargers kicker Michael Badgley.  He is slightly above average and comes in ranked #10.  Punter Rigoberto Sanchez is the 20th ranked punter despite playing half his games indoors, he has a low 41.5 net average.  The Patriots will have a big advantage in the kicking game.  Nyheim Hines is ranked 16th in Punt Returners and the Pats Gunner Olzsewski is ranked 3rd.  Again Hines doesn’t have to deal with the elements.  Isaiah Rodgers handles the Kick-Off duties.

Injuries – The Colts are as healthy as they have been at any point in the season.  They will be without Zaire Franklin as he is on the COVID list and is highly unlikely to be cleared for Saturday might.  They are also coming off the bye week which is neutralized by the Patriots coming off the bye as well.  The Patriots have really been screwed by the schedule makers.