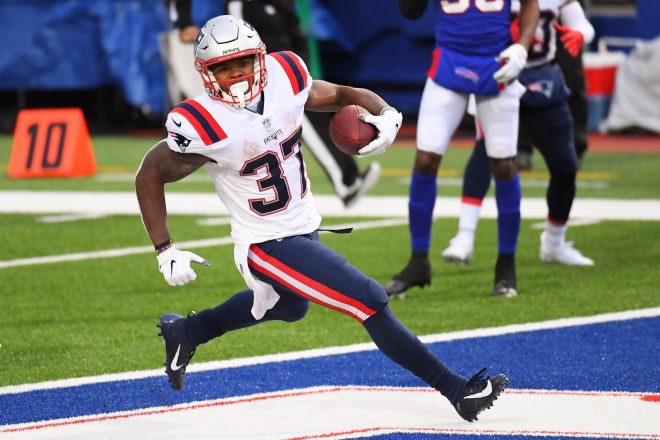 The Patriots’ offense overall had a terrible 2020, but if there was a bright spot in the dismal 7-9 season it was from the running backs.

The team had a nice 1-2 punch of Damien Harris and Sony Michel, both of whom averaged over 5 yards per carry in the running game last year. Harris, after a red-shirt type of season in 2019, suffered a freak injury at the end of training camp and missed the first few weeks of the season.

However, in 10 games, Harris showed that he is more than capable of being a very good weapon in the running game. He carried 137 times for 691 yards (5.0 average) with two touchdowns. The knock on Michel has always been injuries and he was dinged up a couple of times but in nine games Michel had some excellent moments as well. He carried 79 times for 449 yards (5.7 average) with a score.

Rex Burkhead (now with the Texans) was off to the best season of his career before going down with an ACL injury that required season-ending surgery. That was coincidentally against the Texans in NRG Stadium. Prior to that, Burkhead rushed for 466 yards and three touchdowns adding another 192 through the air.

Health was an issue but their depth was such that they were able to weather the storm. James White had a down year out of the backfield, but that had more to do with the play calling and QB play than it had to do with White. Brandon Bolden opted out and J.J. Taylor showed flashes in a limited number of reps. Jakob Johnson had a solid year as the fullback leading the way.

So, let’s take a brief snapshot of the position and see who stays, who goes, and who is on the bubble as the team begins training camp in 2021.

Discussion – When it comes to the running back position, other than injuries if there was an issue it was predictability. With Damien Harris and Michel on the field, the Patriots were (for the vast majority of the time) going to run the ball. Combined they had only 12 catches out of the backfield. When White was on the field, it was invariably a pass. 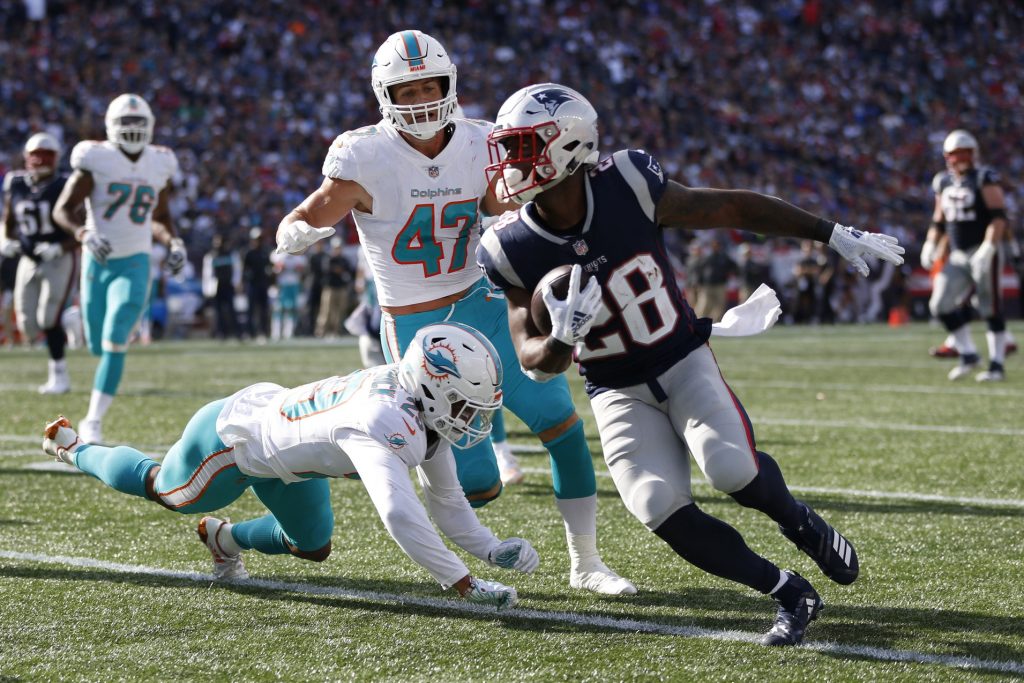 That’s what made Burkhead so invaluable, his versatility. He could run and catch and his being on the field kept defenses honest. They’ll be looking to get both Harris and Michel more involved in the passing game, something both did well at in college.

But Harris should be the guy who gets the majority of touches in 2021. His ability to make solid yardage after contact, hit the holes quickly and decisively, and consistently get to the second level makes him very valuable. And he has two years remaining on his rookie contract. If he can become more of a weapon in the passing game, he could increase his value even further. The only question with Harris is, can he stay healthy and still give the Patriots an increased workload.

Rhamondre Stevenson is the wildcard in the grand scheme of things. While many times the Patriots tend to give their running backs a “redshirt” type of rookie season, Stevenson has the build, physicality, and the ability to catch out of the backfield to make him a weapon right away. In the Patriots system, the versatile guys, like Rex Burkhead, Shane Vereen, Dion Lewis, and Danny Woodhead were the beneficiaries of it, and all had success. But none of those players had the size and physicality of Stevenson. If he can pick up the passing game and more importantly, the pass protection schemes, the team insists its backs must-have, then he could step into a 1-2 role with Harris right away…

This leads to Sony Michel, depending on how the summer goes, Michel could find himself either as one of the top two backs or dangled as trade bait at the end of training camp. Michel has been beset by injuries, but when he’s been healthy he’s been very good, despite what talk sports radio will tell you. If the team decides to keep him and Harris, they would probably split the carries although I still expect Harris to be the lead guy. 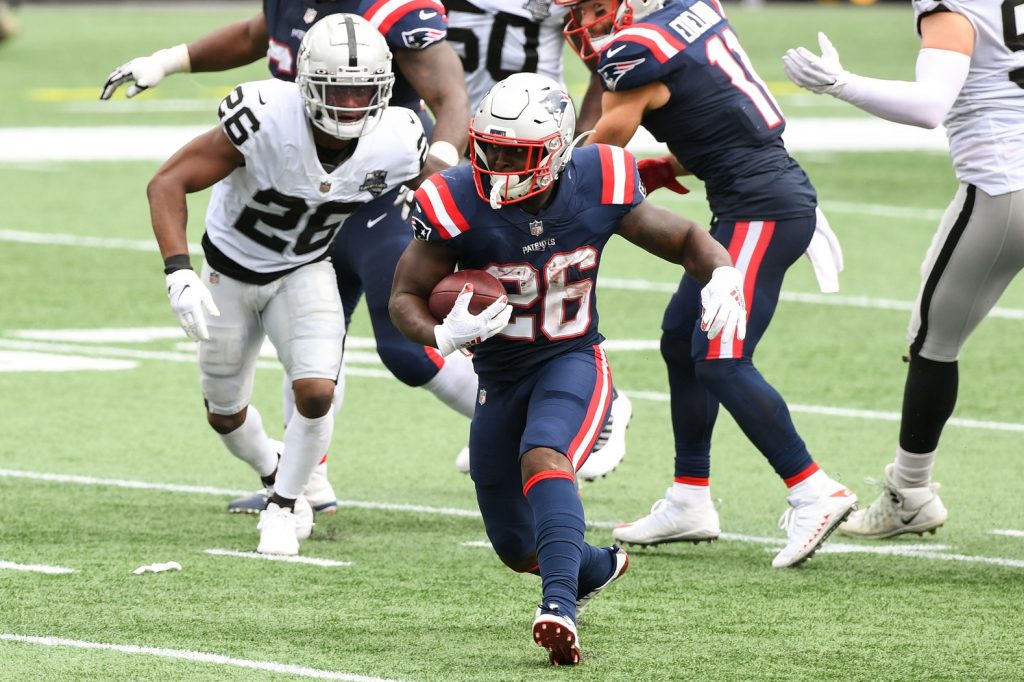 James White missed some time last year after a horrific auto accident took the life of his father and left his mother seriously injured. White’s numbers were well off of where he is normally expected to produce. But those had more to do with the play calling and the play of the QBs than any drop-off of talent in White’s game. I fully expected White to get scooped up by the Bucs who lacked consistent hands by the RBs in the passing game and was pleasantly surprised when he returned. I expect the offense to be quite different this year and expect that White will be much more productive in 2021.

J.J. Taylor or as running backs coach Ivan Fears calls him, “Little Dion” had a few flashes as a rookie when injuries piled up early in the season. Now in his second year, Taylor could step into that Rex Burkhead role or simply be groomed to take over from James White in 2022 as the designated pass-catcher out of the backfield. The team gave him a cameo as a kick returner in 2020. He will probably see an increase in snaps there as he and Gunner Olszewski will probably split kick and punt returns this year.

Brandon Bolden someday will be replaced as a Special Team’s standout who can contribute when needed if the inevitable injuries occur. Yes, someday he will be replaced. But will it be 2021? I don’t think so. He’s a valuable, popular player both in the locker room and with the coaches. And if he hasn’t lost a step after opting out of 2020, then I believe he’ll be back for another go-round.

Jakob Johnson is in a difficult position in 2021. Last year the Patriots utilized two running backs, one tight end and two wide receivers (21 personnel) often. And he played very well as the lead blocker. But with the additions of Hunter Henry and Jonnu Smith, I expect to see the team utilizing a lot of one running back, two tight ends, and two wide receivers (12 personnel) a lot more this year. Do they need a fullback? Meh, not as much. Bolden can be used in short-yardage and Dalton Keene, at tight end could be used as an FB/H-back, tight end who gives them a bit more in the passing game.

Johnson could automatically revert to the practice squad due to his European exemption and wouldn’t count as a member of the team. However, then he would be prohibited from playing at all in 2021. It will be a difficult call here.

For the record, I liked Tyler Gaffney in his first (of several) stints with the Patriots. He left pro football for a time and tried his hand at professional baseball. Now back with the Patriots, I think barring a slew of injuries during camp/preseason, it is hard to see him making the team. But I still like him and wish him luck this summer.

So, what are my expectations, barring injury this year? I have the Patriots keeping five running backs. Damien Harris, James White, J.J. Taylor, Rhamondre Stevenson, and Brandon Bolden. I expect them to trade Sony Michel in the final year of his deal and either stash Johnson on the PS or cut him loose.

The future of the running backs, here is that Harris, Stevenson, and Taylor are going to be the big three

By: Robert Alvarez
Patriots Chairman and CEO Robert Kraft is honored by two organizations for his charitable and humanitarian work.
59 mins ago