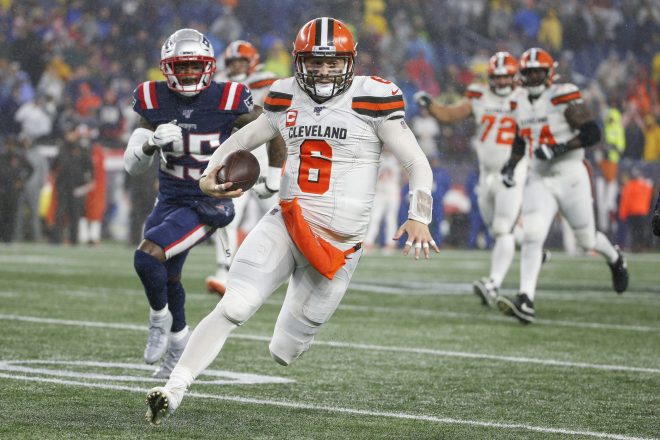 This week’s opponent is the Cleveland Browns and they are another challenge for the streaking Patriots.  They have their issues the same as the Patriots and this should be another interesting and winnable game for the Pats.

Normally we start with the QB analysis but this week we will begin with the Running Backs.  Cleveland loves to run the ball but they are hurting at Running Back at the moment.  Field Yates (ESPN) tweeted on Friday that Nick Chubb is Out for Sunday.  Backup Demetric Felton is also listed as Out and both are under the COVID Protocol.  Right now D’Ernest Johnson is their sole running back.   Johnson was undrafted out of South Florida in 2017.  The 5’11”, 208 lb back had a tryout with New Orleans but didn’t get a contract and sat out the entire 2017 season.  He eventually signed on with the AAF Orlando Apollos.  Cleveland signed him for 2019 made the roster out of camp.  In Johnson’s only start this year he ran for 146 yards on 22 carries and a TD in a Browns 17-14 victory over the Broncos.  The fourth-string running back John Kelly is out.  Kareem Hunt (IR) will not be activated ahead of the Patriots game on Sunday.  Running backs Brian Hill and Dexter Williams were signed to the Practice Squad in the last two weeks and would be eligible to be activated for the game.

According to Bill Belichick, “They are a very good running team. They’ve really dominated the running game for most of the season, which has let them dominate time of possession, field position, and so forth. It’s been a major edge for them”.

The Offensive line is as good as they get.  Left Guard Joel Bitonio is a three time Pro-Bowl player and last season he was named All Pro.  I loved Bitonio coming out in the 2014 draft.  I wanted the Patriots to select him in the 1st round, pick #29.  Instead, Bill Belichick took DT Dominique Easley, a player they knew had a knee injury.  Easley was a complete bust.  Bitonio was taken by Cleveland in the 2nd round selection #35.  The Browns just signed the Right Guard Wyatt Teller to a long term deal.  Center JC Tretter was injured this week and may not play on Sunday.  That would be a big loss.  Jedrick Wills is the Left Tackle.  The former Bama Crimson Tide Tackle was the # 10 draft pick in the 1st round last year and will be the anchor of the Browns line for years to come.  Blake Hance is the Right Tackle.  Hance was a Undrafted Free Agent that bounced around from Buffalo, who sigend and released him in 2019.  Then Washington and Jacksonville had him.  Finally, the Jets signed him to the Practice Squad.  Cleveland, on Jan 2, 2021 signed Hance off the Jets Practice squad late in the season.  Now he is their starter at RT.  He could be susceptible to a pass rush.  Former Patriots draft pick Hjalte Froholdt is a backup.    Cleveland loves to run and the Oline is their strength.  This should be a good matchup against the improving Patriots run defense.

The Wide Receiver position took a hit when the Browns released Odell Beckham Jr.  The Browns still have Jarvis Landry, an ace receiver in the league.  Landry is 19 receptions on 29 targets, for 193 yards, 10.2 average, and no TDs.  Donovan Peoples-Jones from Michigan, a 2020 6th round selection is a big receiver at 6’2” 204lbs.  He is emerging as a big-play receiver.  His stat line is 15 catches on 18 targets for 314 yards, 20.9 YPC, and 3 TDs.  The third wideout is now Anthony Schwartz.  The Auburn product was a third-round pick this year.  He is 6’ 186 lbs (very slight), however, he is lightning fast.  He was a world-class sprinter in high school.

The Tight End group is very strong with David Njoku finally living up to his high draft selection.  He leads the team with 21 catches on 27 targets for a team-leading 341 yards, 16.2 average, and 2 TDs.  Austin Hooper is no slouch either.  The former top TE at Atlanta has 20 catches in 30 targets, 183 yards, a respectable 9.1 average, and 1 TD.

Baker Mayfield is the former Heisman Trophy winner and 1st overall selection in the 2018 NFL Draft.  His numbers through 8 games played are; 150 completions on 225 attempts (66.6%), for 1917 yards, 8.5 average, and 8 TDs.  Add in that Mayfield is a threat to run, rushing 20 times for 80 yards (4.0) and a TD.  He is the heart and soul of the team.  Not having Beckham won’t affect him.  Not having Nick Chubb to establish the run might.  Mayfield completes most of his passes off play-action.  If the Patriots can stop the run, the play-action isn’t as effective.   Mayfield had his 5th-year option exercised for 2022, but Cleveland is expected to sign him long term by the end of the year.

On Defense, you must start with Myles Garrett. The 1st overall selection in the 2017 draft is a two-time Pro Bowler and was named to his 1st All-Pro team in 2020.  Just 25 years old, he is coming into the 2021 season in his prime as a destructive and disruptive force with 12 sacks on the year.  He is 6’ 4” 272 lbs and quick.  He plays only on the right side of the defense so he should be lined up against Isaiah Wynn.  On the other side is Jadaveon Clowney, another beast of a pass rusher.  Clowney is not the player he once was in Houston, but he is still capable of making a play or two.  Inside they have the Malik brothers, Malik Jackson, and Malik McDowell.  Jackson is banged up and listed as Questionable.  The 10-year veteran is 6’ 5”, 285 lbs, and is light for an interior lineman.  McDowell is 6’6”, 295 lbs, and is entering his 5th year in the league.  Neither is much of a threat as a pass rusher.  The primary backup is Takkarist McKinley who is also Questionable.

At Linebacker, Anthony Walker leads the team in tackles with 58.  Rookie Jeremiah Owusu-Koramoah has been activated off IR and is expected to play.  The 6’2” 221 lb 2nd round draft pick out of Notre Dame is one of those hybrid Safety / Linebackers similar to Kyle Dugger and Adrian Phillips of the Patriots.  He is particularly good at covering TEs and RBs.  Sione Takitaki is the Strong side Linebacker.  Takitaki only has 24 tackles in 8 games, with no sacks.   At 6’1”, 238 lbs he is a little light for the position.  Mack Wilson has played in all 9 games with 28 tackles and started at Weakside Linebacker.  The former Alabama product is 6’1” 233 lbs and was a 5th round selection in the 2019 draft.

The secondary is very good led by CB Denzel Ward and Safety Johnny Johnson.  Ward has a 99 yard INT for a TD and Johnson has 2 INTs.   Ward, a 2018 1st round, #4 overall selection played at Ohio St.  Have you noticed the trend, the number of high draft selections because the Browns were so bad for so long.  Johnson, the former Boston College player, was drafted by the LA Rams in 2017 and signed with Cleveland as a Free Agent.  He is the glue that holds the secondary together.  Greg Newsome is listed as the Right Corner and Troy Hill has played a lot and is 2nd on the team in tackles with 38.

Chase McLaughlin is the number 11 ranked kicker in the league.  He has 13 Field Goals in 15 attempts.  On Extra points, he is 23 of 23.  He has made all 4 of his Field Goals over 50 yards this year.  Punter Jamie Gillan is nicknamed the Scottish Hammer, but his punting is not living up to his nick.  His 41.8 average is next to last in the league.  His days are numbered in Cleveland.  Demetric Felton is also in the COVID Protocol and is listed as Out, but the team has not declared him out as they did with Nick Chubb.  That means People-Jones will handle the Punt Returns and Anthony Schwartz the kickoffs.  Gillan is the holder and Charley Hughlett is the Longsnapper.

Myles Garrett has a foot injury and will play, but may be limited to only pass rushing.  Chubb and Felton are out (COVID) but Owusu-Koramorah should be back.  The biggest injury is Center JC Tretter.  That could be a game-changer.

Strategy I believe the Patriots will still continue to try and establish the run despite having just two runningbacks healthy.  I think Jonnu Smith, despite having a shoulder injury, will also be used in the running game.  Look for Mac Jones to depend on his TEs as outlets.  Do not be surprised to see the number of times the Patriots go empty backfield 5 WRs.  This is going to be a wild game.  The Patriots on Defense will try and stop the run and make Cleveland one dimensional.  The secondary will try and take away Landry with double coverage leaving Jackson man up on Peoples-Jones.  Don’t look for the Patriots to go as heavy on Defense as they did to start the game against Carolina.  TEs David Njoku and Austin Hooper matchups against Phillips and Dugger could be the key.  The Patriots Defense is a top five defense right now and have not let up more than 24 points in any game this season.  They may need another strong performance on Sunday to secure the win.