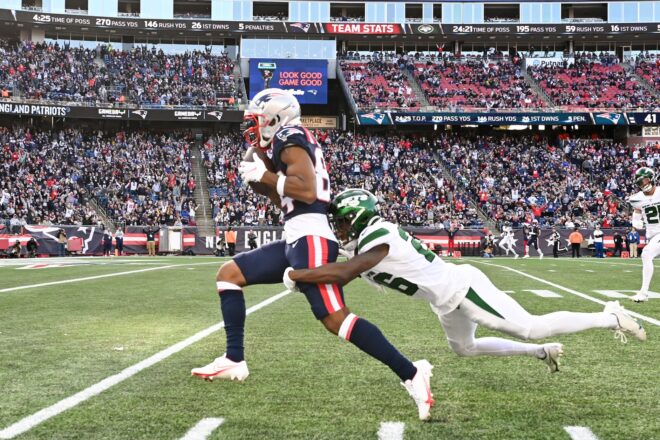 The New England Patriots put together their third win, and first at home during the 2021 season this past Sunday against the New York Jets with a dominating 54-13 beat down at Gillette Stadium.

The game marked the 12th straight win by the Patriots over the Jets dating back to the start of the 2016 season.

Notable moments in the game saw the Patriots score over 50 points in a game for the first time since 2015, kicker Nick Folk reaching the 300 made field goals milestone, and quarterback Mac Jones passing for over 300 yards for the first time in his career.

The Patriots will head west to take on the Los Angeles Chargers at 4:05 pm EST this Sunday.

By: Robert Alvarez
Check out the sideline sights and sounds and victorious Patriots locker room during week 12 against the Tennesse Titans.
3 days ago

By: Mark Morse
In the words of Larry the Cable Guy, “Let’s Git-R-Done” and that’s exactly what the Patriots did on Sunday.
6 days ago

By: Steve Balestrieri
Jones didn’t have his best game and yet he completed 23-32 for 310 yards with 2 TDs and 0 INTs for a passer rating of…
6 days ago

By: Robert Alvarez
Check out the best postings that were shared across social media during the Patriots Week 12 victory over the Tennessee Titans.
7 days ago
wpDiscuz