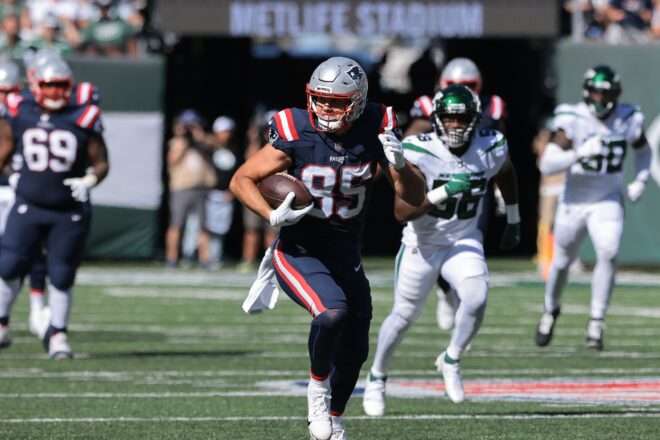 The Patriots return to the surprisingly not-so-friendly confines of Gillette Stadium to take on the Jets on Sunday. For the first time in the Bill Belichick era and the first time since 1993, the Patriots begin the season 0-4 at home.

Both Patriots wins have been on the road, and the first of them was a Week 2, 25-6 win against the Jets when they picked off Zach Wilson four times. But the Jets have had two weeks to prepare for this one, having the bye week last Sunday.

This week’s game will be broadcast by CBS and can be seen locally on WBZ-TV Channel 4. Andrew Catalon will handle play-by-play duties with James Lofton as the color analyst. Amanda Balionis will work from the sidelines. The game will also be aired on the Patriots flagship radio station 98.5 The Sports Hub with Bob Socci and Scott Zolak on the call, produced by Marc Capello.

The Patriots have beaten the Jets 11 times in a row sweeping the season series with Gang Green the past five years. This would be the sixth straight season sweep with a victory. Since Bill Belichick has taken over the reins in 2000 (which was the last time the Jets swept the Patriots), New England has owned this matchup going 34-11.

Patriots greats Richard Seymour and Tracy Sormanti will be honored at halftime as he’ll enter the Patriots’ team Hall of Fame. Seymour spent the first eight years of his career with the Patriots and earned five straight Pro Bowls and three straight first-team All-Pro nods.

Sormanti was the head of the Patriots cheerleading squad and was a member of the Patriots family for 32 years. She passed away last December after a long battle with multiple myeloma.

The Patriots (2-4) were beaten by the Dallas Cowboys 35-29 in overtime. Dak Prescott passed for 445 yards, the most ever allowed by a Bill Belichick-coached team.

The Patriots’ running game had a solid game against the Jets in Week 2, rushing for 101 yards and a 4.2-yard average. But 26 of them came on one carry to Damien Harris.

After struggling for a couple of weeks to run the ball the team looked much better against the Cowboys. Harris and Rhamondre Stevenson ran well behind a patchwork offensive line.

The Jets have a stout front with Sheldon Rankins, Quinnen Williams, John Franklin-Myers, and Bryce Huff but may be without LB C.J. Moseley who suffered a hamstring injury in London.

The Patriots’ passing game continues to be determined how well the offensive line can protect Mac Jones. When he’s had time to throw, he’s been incredibly efficient completing over 70 percent of his throws.

Jones seems to be finding nice chemistry with Hunter Henry who has gotten better in the past three games and has scored in each of them. Jones needs to get fellow tight-end Jonnu Smith more involved in the offense. The same goes with Nelson Agholor and Kendrick Bourne, although Bourne scored on a 75-yard touchdown pass on Sunday. Jakobi Meyers continues to be the go-to guy in the Patriots’ passing game.

All four of the Jets defensive linemen have at least 10 pressures, that will be the key here, if Jones gets time to throw, then there should be some room for the receivers to find some room. Look for Rhamondre Stevenson to try to replicate his game from last week. If he can be a productive player out of the backfield, the offense should be much more successful.

Next up the New York  offense:

The Patriots’ run defense looked very good against an excellent Dallas running game for three quarters but got worn down in the 4th quarter. The front seven of  Lawrence Guy, Davin Godchaux, Deatrich Wise, with linebackers Matthew Judon, Ja’Whaun Bentley, and Dont’a Hightower got a bit beat up in last week’s game. But they’ll be looking to continue an upward trend from the last three weeks.

The Jets’ anemic rushing attack that only averages 74 yards per game (31st) and 3.6 yards per carry (30th), absolutely gashed the Patriots for 152 yards on 31 carries. Rookie Michael Carter leads the Jets in rushing with just 165 yards.

Look for the Patriots front seven to do a better job in this one, and cut down on the running lanes for Carter, Ty Johnson, and Devin Coleman.

The Patriots’ secondary got gashed by the Cowboys’ talented group last week, the second week in a row, that the secondary has been victimized. And right now they are a banged-up group with Jonathan Jones, Jalen Mills, as well as Hightower, and Deatrich Wise Jr. are all nursing injuries.

The Jets’ passing game looks to be much improved at some point this season with Wilson taking over at QB and Jamison Crowder, Elijah Moore, Braxton Berrios, Tyler Kroft, and Denzel Mims, but thus far it hasn’t translated to the field. The Jets rank 30th averaging just 193 yards per game.

Look for the Patriots to bring pressure on Wilson again, they sacked him four times and picked him off four more in Week 2. It won’t be that dominant but they should be able to hold their own. Matthew Judon continues to be the man to watch for the Patriots’ defense.

Homefield cooking is the difference here. The Patriots’ Nick Folk has been nearly automatic this season making 14 of 15 field goals. Jake Bailey is having an offseason and much of that has to do with his protection. He’s had two punts blocked this season.

Matt Amendola has been solid if unused this season, making 6-7 field goal attempts. Thomas Morestead is the Jets punter and he’s been solid, averaging 47.5 yards.

The Patriots’ coverage units are always a strength and should be able to handle Braxton Berrios although Tevin Coleman had a 65-yarder against the Falcons, the Patriots will counter with Gunner Olszewski who had a 23-yard return last week and Brandon Bolden.

This week’s game is kind of a must-win for the Patriots after losing two games late in the past three weeks. The Jets have had two weeks to prepare for this one and come in rested and reasonably healthy.

The Patriots need to continue that trend and put them on their heels, forcing them to become one-dimensional on offense. That will allow the pass rush to get home against an offensive line that has struggled to protect the QB.

Clean It Up – The Patriots have played very uncharacteristic sloppy football this season. Bad penalties, poor ball security.  And missed opportunities have been the norm through the first six weeks.

Ball security and limiting the laundry are keys this week. They need to be the ones who will force the Jets into making the mistakes again and turning the ball over.

Give Jones More Leash to Play – The Patriots’ have been very conservative with their play calling with Jones for much of the season, but it would be nice to see the coaches trust him more and allow him some leeway in throwing the ball more down the field, especially when they get inside the red zone.

This week, look for that to happen a bit more, which should result in better red-zone production, which has been a problem this season.

Jones will have another solid game and the two tight ends should figure more and more moving forward. This one will be closer than most people are expecting. The games are usually a rock fight against Gang Green…Patriots 27-20