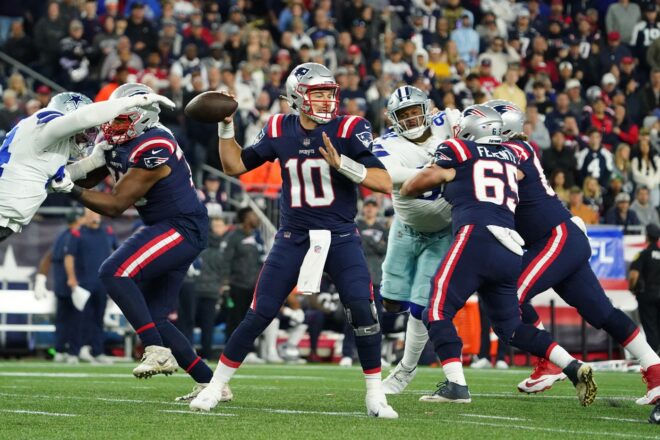 The Patriots lost an overtime game that was right there for the taking several times to a superior Dallas Cowboys team. It was a wild finish as the fourth quarter and overtime were not short on exciting plays and drama.

This is a weird game to grade as one hand the Cowboys and Dak Prescott literally shredded the Patriots’ secondary for 445 yards and 3 TDs as Dallas rolled up 567 yards of offense. Both of those numbers were the most that a Bill Belichick defense has allowed.

But if I told you on Saturday that the Patriots would hold the potent Cowboys offense to just 3-13 on third downs, 2-4 on fourth downs, and just 2-5 in the red zone, you’d probably believe that the defense slowed down that Cowboys offense and that they had a really good chance to win. The latter is true, the former…not so much.

The offense started off like a house on fire, scoring two touchdowns on just seven offensive snaps and then had a third called back on a penalty. Then, Mac Jones, had the boom lowered on him as Randy Gregory hit him full speed after blowing right past Yodny Cajuste. Then the play calling went into the witness protection program until the fourth quarter. It was laying low.

Jones showed a ton of resilience. He led Kendrick Bourne too far and the ball bounced off his hands and right into a pick-six by Trevon Diggs who got another one this fall gift-wrapped to him. But Jones on the next offensive snap went right back and went after Diggs and he bit on a double move by Bourne and was beat for a 75-yard touchdown.

So, here are our positional grades this week for the Patriots-Cowboys game.

Mac Jones finished the game 15-21 for 229 yards with 2 TDs, 1 INT for a passer rating of 119.0. Jones didn’t get many snaps in the early going but he made the most of them finishing the first half with a perfect 158.3 passer rating.

The play calling got very conservative after he was blasted by Gregory and it wasn’t until the 4th quarter and the team down six points that the coaches loosened the reins…they should have let him play his game.

He and Jakobi Meyers hooked for a number of great throws into tight windows and tough catches. It was impressive to watch. While Jones only attempted two passes that were 20 yards beyond the line of scrimmage, both went for touchdowns.

The pick-six was Jones’ fault, he led Bourne a tad too far, and it could have been a back-breaker but he came right back and threw a nice 75-yard touchdown. The only problem with that was that he did it with too much time on the clock.

This was a great gutsy effort by Damien Harris who was left last week’s game with a painful rib injury and he was far from 100 percent in this one. But ran for an impressive 101 yards on 18 carries and a touchdown on the day.

Rhamondre Stevenson ran for 23 yards and a score on five carries but added 39 yards on three catches, including a really impressive 22-yard seam route on the Patriots’ second scoring drive. The added dimension of being a viable target in the passing game will definitely bear watching in the weeks to come.

Jakobi Meyers led the WRs (what a surprise) with 4 catches for 44 yards and remains the team’s best move the chains guy. He had a couple of huge conversions with some tough catches. But he had a whiff on an important third-down block that hurt. He had another nice 25-yard TD wiped out by a penalty.

Kendrick Bourne had the ball hit his fingertips on the interception, he tried to take the high road that really wasn’t on him. But he responded with his only catch of the game but it was a huge 75-yard touchdown.

Nelson Agholor had only one catch, a big 27-yarder early in the game. On the Patriots’ first snap in O.T., he dropped a quick slant with an absolute ton of green in front of him. On the final offensive snap, he had his facemask tugged but the officials missed it. Those two plays were the ultimate killers on the night.

Hunter Henry had another touchdown a nice 20-yard seam route, but he only caught one other pass from Jones for five yards. He was only targeted twice. Jonnu Smith had just a single catch for nine yards. He was only “targeted” twice, the other being a throwaway.

So, while they were not being targeted, when the Patriots were in the two-TE offense, that’s when they were at their most effective. The coaches have to find a way to get them both more involved.

The offensive line is still a revolving door of trying to find combinations that work and players who can keep their QB upright. The fact that the team is still doing this on Week 6 speaks volumes.

However, it wasn’t all bad. Dallas sacked Jones only twice and was hit five times, a departure from the double-digit hits he’s been suffering. The Patriots averaged 4.96 yards per carry and were able to grind out 120 yards on the ground.

The run defense was very good for three quarters and after being on the field for nearly 40 minutes began to wear down. While both Ezekiel Elliott and Tony Pollard averaged over four yards per carry, the run defense did a great job of slowing them down, they’d been averaging 201 yards per game on the ground in their four-game winning streak. The Patriots held them to 122.

The goal-line stand at the end of the first half was very impressive, stopping four straight runs from the one-yard line. But they weren’t able to generate nearly enough pressure on Prescott

The linebackers were led by Ja’Whaun Bentley who made 13 tackles but none were bigger than his outstanding effort in leaping over the pile on the goalline and knocking the ball out of the hands of Prescott when he was launching from the opposite side.

That stand and Bentley’s play would have been the highlight of the game …if the Patriots had won. But their pass rush was snuffed out by an outstanding Dallas OL. The setting of the edge was also an issue, when Prescott broke containment and got to the edge he was a phenomenal 9-11 for 171 yards and the game-winning TD.

Bill Belichick always says that the pass rush and coverage go hand-in-hand. When facing the most balanced offense in the NFL, if the pass rush is giving the QB oodles of time to throw, nobody is going to be able to cover for that long. And things got worse late in the game when the defense just wore down.

Prescott shredded them for 445 yards going 36-51 with 3 TDs and 1 INT. Cee Dee Lamb was uncoverable in the second half and finished with 9 catches for 149 yards and two scores including the game-winning 35-yarder. The Patriots came with a zero blitz which was picked up and once Prescott hit Lamb on the quick slant there was no one to pick him up. Jalen Mills was overmatched against Lamb, but the secondary overall just didn’t match up well.

The unit was shorthanded and several members were playing hurt. So, while it was bad, it wasn’t all on them.

Jake Bailey had a second punt blocked this season, another first for a Belichick-coached team. Jahlani Tavai double-teamed a rusher and left a free rusher to come right up the middle untouched. Personal protector Cody Davis was looking right where Dallas showed an overload.

Gunner Olszewski had a punt return of 23 yards which was a good sign. Justin Bethel had a big day as well, he forced a fumble on a punt return and may have influenced the missed field goal where he broke in clean. Filling in for a banged-up Jonathan Jones, he deflected a Prescott pass in the end zone, that was picked off.

The Patriots’ coaches didn’t have a great day, the play calling in the middle two quarters was far too conservative, and facing a potent Dallas offense, they let far too many 4th and short opportunities slide by without attempting one. Not one. The 4th and 3 in overtime? Did anyone really believe that the gassed defense was going to stop Dallas?

And while Ernie Adams has retired, is every one asleep in the booth? They should have challenged the spot on Meyers’ third-down catch ruled short just prior to the blocked punt. After stopping the Cowboys on the goal line, they had 1:30 to get more points and double dip as they’d receive the 2nd half kickoff. One middle run and take a knee.

We’re on to the Jets, which is hardly a sure-thing at this point.