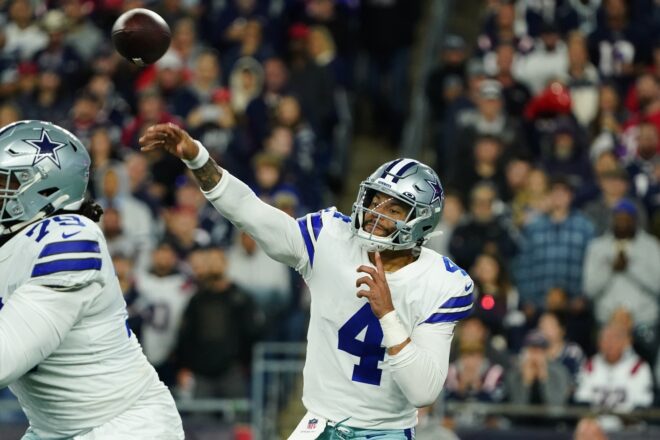 The Dallas Cowboys got the ball at their own 20-yard line in O.T. and there wasn’t much doubt that they were going to move the ball against a gassed Patriots’ defense.

Dak Prescott, who is definitely an MVP candidate at this juncture of the season, then led the Cowboys down the field before hitting Cee Dee Lamb for a 35-yard touchdown to win the game and drop the Patriots to 2-4 and their first 0-4 start at home since Drew Bledsoe’s rookie season.

Part of the reason was the self-destructive state of Dallas, who several times seemed to try to give this one away. Dallas was penalized 12 times for 115 yards and could have been flagged for more (more below).

The story of this game had more twists than a Guy Ritchie film, especially in the second half and definitely in the final minutes of regulation with four lead changes. But the bottom line is, despite the fact that they had the opportunity to steal a game they had no business in doing so, they let multiple chances to salt this one away slip through their grasp. It has been a recurring theme all season.

It has been a season of moral victories. Well, this one isn’t one of them. This one was a crushing loss and no amount of “feel good” factors can ease the sting of this one.

Prescott was almost unstoppable in this game, passing for 445 yards (the most ever allowed by a Bill Belichick defense) completing 36-51 with 3 TDs and 1 INT. Behind an outstanding offensive line, Prescott frequently had six seconds or more to throw. And he made the most of things, whenever he got out of containment, he made the defense pay.

We wrote in our keys to the game that Prescott was the guy the Patriots had to stop…they didn’t. It wasn’t for lack of trying. The defense emptied the tank but nothing was working. They tried (and failed) to contain Prescott in the pocket, dropping several 7-8 defensive backs into coverage, blitzing up the A-Gap, all to no avail. He wasn’t sacked, was hit just four times, and made some great throws.

His biggest play was at the end of regulation, with Dallas down by three and facing a 3rd and 25, he fired a pass to Cee Dee Lamb for 24 to set up the game-tying FG. Lamb had a huge game catching 9 passes for 149 yards and 2 TDs including the game-winner in O.T. where he rubbed it in Jalen Mills’ face as he crossed into the end zone. Dallas rolled up a whopping 567 yards of offense.

However, the Patriots’ run defense was excellent for most of the game, before wearing down late in this game. Ezekiel Elliott and Tony Pollard were held in check until late in the 4th quarter. Overall Dallas gained 122 yards on the ground, during the first four games of their winning streak, they were averaging 201 yards on the ground.

The run defense had their best moment late in the first half when Dallas had a 1st and goal at the Patriots’ one-yard line. Three times they stuffed runs and on 4th down, Prescott tried to dive and extend the ball over the goal line. Ja’Whaun Bentley knocked the ball free and the defense recovered. 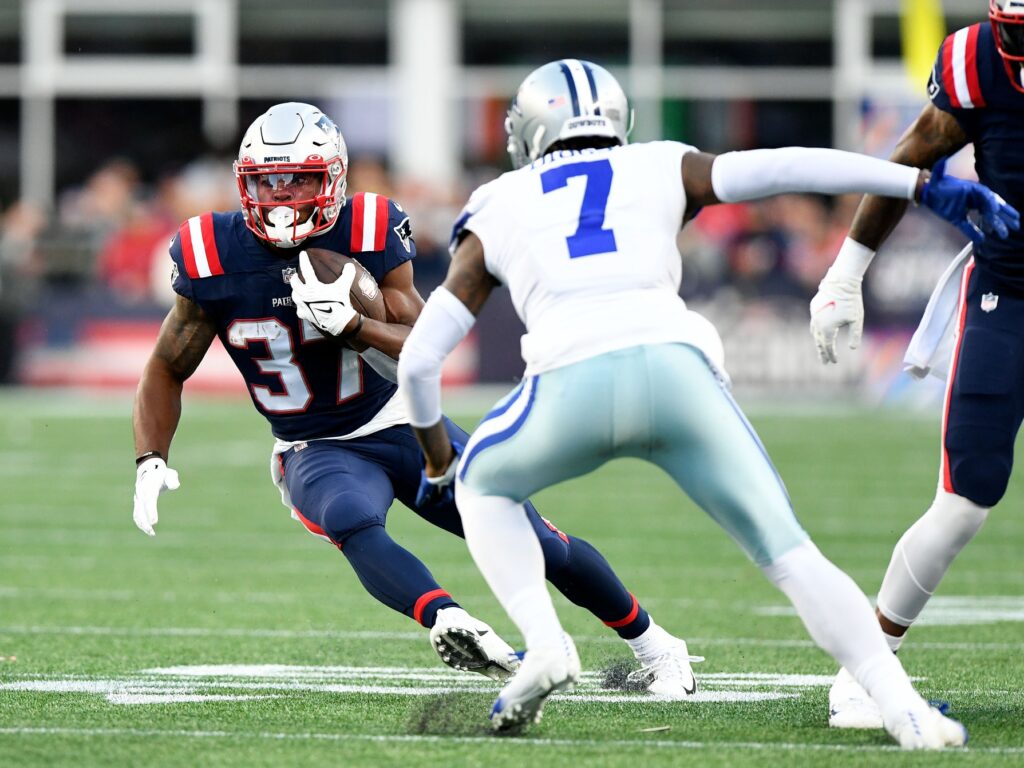 The Patriots’ coaching staff needs to reevaluate their decisions that are hamstringing their rookie QB and their offense which could use some help. After stopping Dallas on the aforementioned goal-line stand, the offense took over at the 20-yard line with 1:30 to go in the half and they were content to take a knee, losing an opportunity to score and then get the ball to start the third quarter.

And after scoring 14 points on just seven offensive plays in the first quarter, they once again went ultra-conservative in their play calling. And predictably enough, the offense went nowhere.

With the defense gassed late in the game, the Patriots had a 4th and 3 at their own 46-yard line in O.T. Instead of going for the win, they opted for “Marty-ball” and punted to Dallas. Was there any doubt that Dallas was going to move down the field at that moment? They moved into scoring position the last four times they had the ball prior to their O.T. possession and only failed to score on a missed F.G.

Granted, if they failed, the game was essentially over with the Cowboys only about 10 yards from FG range, but there was little doubt they’d move the ball anyway. If they failed, at least it would have been trying to win and not lose.

On the 3rd-down incompletion before the punt, the officials missed a face mask penalty on Nelson Agholor, on yet another play where Dallas attempted to give it away.

The coaches should have challenged the spot on a Jakobi Meyers reception that was judged short of the sticks on 3rd down. One 4th down, the Patriots punt was blocked.

On a key 3rd and 1, the Patriots foolishly took out Stevenson and brought in Brandon Bolden who was dropped for a one-yard loss. Head scratcher.

During the telecast, Tony Romo said more than once that this Dallas team could find itself in the Super Bowl. With a deeply talented offense, an opportunistic defense, and plenty of impact players, he’s not wrong. But if they have a weakness, it is their head coach.

While Bill Belichick gushed over what a great coach Mike McCarthy is, he is the guy who could hold the Cowboys back. On the opening possession of the game, Dallas faced a 4th and 1 at their own 34-yard line. McCarthy inexplicably went for it and Elliot was clearly brought down in front of the sticks. Then McCarthy challenged the spot.

The Patriots then cashed in quickly taking just three plays to go 34 yards for a touchdown with Damien Harris taking a direct snap and powering in for a touchdown to make it 7-0. There was no need to go for it that early.

After Prescott easily moved the Cowboys down the field (a harbinger of things to come), for a tying touchdown, the Patriots moved 75 yards in just 4 plays to take the lead again. Mac Jones passed 14 yards on a swing pass to Rhamondre Stevenson and then followed that up with another pass to Stevenson up the seam for 22 more.

A bad penalty by Trevon Diggs added 15 more after a short gain and then Jones found Hunter Henry on a seam route for a 20-yard touchdown making in 14-7. We pointed out that the seams were the place to attack the Dallas defense…but they didn’t do enough of that as the game progressed.

Prescott moved the ball right down the field again, but a great play by Justin Bethel in the end zone, deflecting the ball right to Kyle Dugger was returned to the Patriots 25. Jones moved the Patriots down the field again, helped by a horse collar flag and a 27-yard pass to Agholor. A 25-yard touchdown pass to Meyers was wiped out by a holding call. On the next snap, Randy Gregory blew right past right tackle Yodny Cajuste and absolutely pile drived Jones and caused a fumble that Dallas recovered. They would convert that turnover into a field goal making it 14-10.

The Cowboys’ offense in the second half got going and scored 10 straight points to take a 20-14 lead early in the fourth quarter. The Patriots’ offense finally awoke and went on a 13-play, 75-yard drive that consumed over six and half minutes to take a 21-20 lead as Stevenson powered in from the one for the score.

That was just the beginning of the crazy finish. Prescott moved the Cowboys down the field but the Patriots defense got a big stop and forced a 51-yard field goal attempt that Greg Zuerlein hooked wide left.

With just 2:42 left in the game, a couple of first downs would put it away, but two plays later, a Jones pass was just too far in front of Kendrick Bourne, who got a hand on it and deflected it right into the hands of Diggs who got a “gift-six” in a stunner that put Dallas ahead 26-21. The two-point conversion failed. 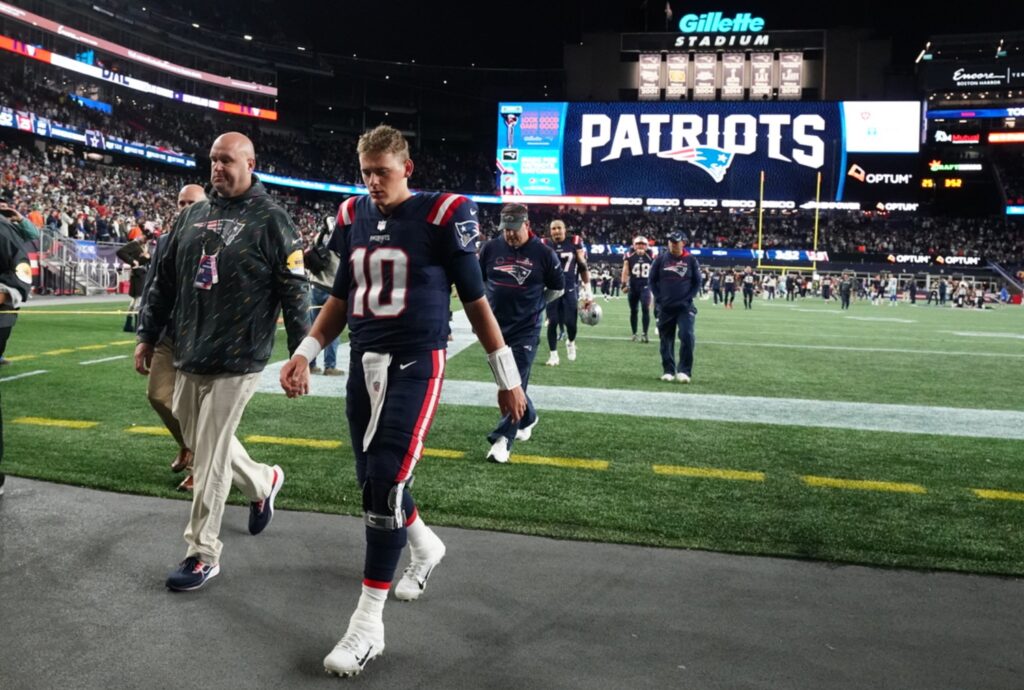 Jones got the ball back and on first down, attacked Diggs who was torched by Bourne for a 75-yard touchdown on the Patriots’ longest play of the year. Dallas safety Damontae Kazee took an awful angle to the ball and Bourne had an easy score. The Patriots went for two and Jones’ pass to Meyers gave them a 29-26 lead with 2:11 to go.

The defense although gashed held Dallas to just 3-13 on third down, 2-4 on fourth down, and 2-5 in the red zone. It was that type of crazy game.

On the first play of overtime, Jones had Agholor on a slant that had plenty of green in front of it. He dropped it. It is the story of the season thus far, they’ve had opportunities to win games, and either the players or coaches drop the ball.

In the end, the more talented team won but they left the game wide open for a steal.