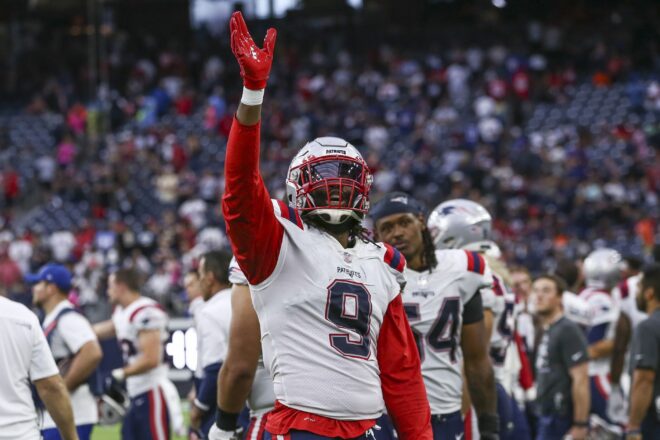 With a critical game against the Cowboys up next for this weekend, this game could certainly change the course of this season for New England.  A win would get the Patriots back to .500 and start getting things headed back in the right direction, especially with a match-up at home next Sunday against the Jets.

If they can pull off the upset and complete the sweep of the Jets next week, two straight victories would put them at 4-3 before they head out on the road on 4 of their next 6 games before the bye week.

That being said, that scenario still requires taking care of business against Dallas and quarterback Dak Prescott.  Dallas is coming into Sunday’s game off of an impressive 44-20 win last weekend against the Giants, and should make for a tough match-up on Sunday when they visit Gillette Stadium.

Here are some fun facts from this one, courtesy of the club’s game release:

1) Heading into this match-up, the Patriots actually have quite an impressive winning streak on the line against Dallas.  They’re 6-0 in their last six match-ups dating back to 1999, with their last loss against the Cowboys coming back in December of 1996, when New England fell 12-6 on the road at Texas Stadium.

That improved Dallas to 7-0 lifetime against the Patriots, with New England finally ending that streak three years later with a 13-6 home win over the Cowboys in a Sunday night game back in December of 1999 at Foxboro Stadium.

In that game, despite Drew Bledsoe finishing 14-of-25 for 176-yards and two interceptions, the Patriots did just enough to beat Troy Aikmen and company thanks to two first-half field goals by Adam Vinatieri, and a fourth-quarter touchdown run by then running back, Terry Allen.  At the time, the victory snapped a three-game losing streak by the club and improved them to 7-5 on the season.

Since then, that success has continued.  Bill Belichick is 5-0 lifetime as Patriots head coach, with his first win against Dallas during his tenure here coming back in November of 2003 when the Patriots beat Dallas 12-0 at Gillette Stadium.

Hopefully, he’ll see his team help improve his record as Patriots coach to 6-0 over the Cowboys while improving the franchise’s streak to seven straight wins over Dallas.

2) Nick Folk has an opportunity to become the 35th NFL player to reach 300 career field goals on Sunday, with the veteran currently just one kick away from this milestone.

Folk is coming off a strong performance after earning AFC Special Teams player of the week thanks to his four field-goal showing last Sunday against the Texans including two kicks from 52-yards.

3) After recording a sack in four straight games, Matthew Judon can become the 7th Patriots player to achieve a streak of at least five games with a sack.  He would be the first New England player to do so since Chandler Jones accomplished the same feat back in 2015.

4) If Mac Jones finishes Sunday’s showdown against the Cowboys completing over 70% of his throws, he will become the first rookie quarterback to ever complete 70% of his passes in five of his first six games.

5) Receiver Jakobi Meyers may still be looking for his first touchdown after finishing last week’s game without reaching the end zone, but Meyers is also sitting on the verge of breaking a different mark before this season is over.

Meyers, who is a perfect 4-of-4 throwing the football with two touchdowns in his brief career when he’s been called upon, is currently 2-for-2 for 45-yards this season.  If the former quarterback is asked to throw another pass, should he complete it, he’ll become the first Patriots wide receiver to complete more than two passes in a single season.

However, barring the Patriots getting tricky quite a bit this season, getting the club record for non-QB throws would most likely be a longshot for Meyers.  The marks to hit are fairly high, with former Patriots RB Andy Johnson finishing 7-of-9 for 194 yards with four touchdowns in 1981, while RB Dick Christy was 6-of-11 for 94 yards and two touchdowns back in 1960.