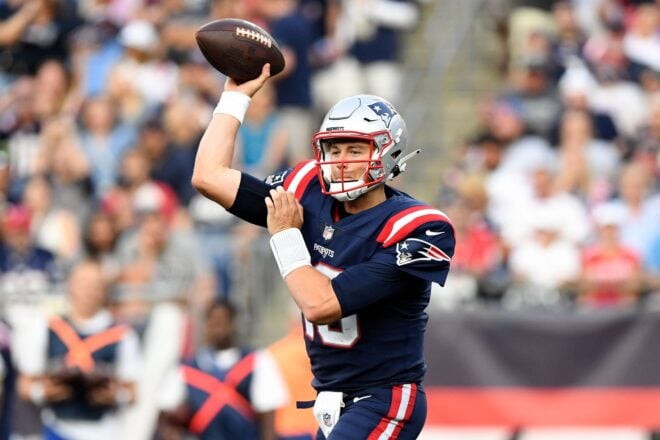 Looking back at Sunday’s game against the Dolphins, it’s obvious that the Patriots coaching staff did the best they could to set Mac Jones up for success.

The rookie looked quick and decisive on Sunday as he finished with an amazing 74% completion percentage, which as NFL Network reported, made him just the fourth player in the last 71 years to complete 70% of his passes while finishing with 275+ passing yards, as well as one or more TD passes with zero interceptions in his first career start.  According to NBC Sports Boston, his completion percentage was also the highest of any rookie QB’s first start with a minimum of 25 pass attempts in NFL history.

Josh McDaniels called plays that allowed Jones to get the ball out of his hands quickly for that to happen, which according to NexGenStats had Jones alongside some elite company when the company released their totals on Monday.

Jones name was listed in the top 10 of this week’s results, coming within .04 seconds of former Patriots quarterbacks Tom Brady and .03 behind Jimmy Garoppolo in the “time to throw” category: 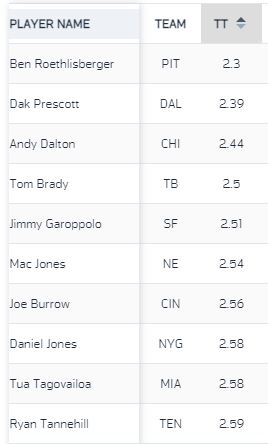 Down in Miami former Alabama teammate, Tua Tagovailoa, also came in at just .04 behind Mac Jones.

Overall, it was a solid performance, and seeing the execution against the Dolphins was a good first step for a player who also avoided turning over the football in his first outing.

But despite how quick he got rid of the football, the Dolphins still managed to get some hits on Jones, who also made some terrific throws despite the pressure.  Miami hit him 9 times but sacked him just once.  However, after watching the replay of Elandon Roberts’ roughing the passer penalty in the second quarter where he took the rookie down awkwardly after going in low, Jones is fortunate to have escaped injury and New England’s offensive line will definitely need to do a better job of protecting him moving forward.

Needless to say, it was great to see him both thinking fast and pulling the trigger just as quickly, which likely kept things from potentially being worse.  While the outcome wasn’t what anyone obviously hoped for, Patriots fans should at least be able to walk away from this one feeling pretty good about the future of their new signal-caller.