According to an ESPN report, Patten was killed in a motorcycle crash outside of Columbia, South Carolina, according to Richland County  Coroner Naida Rutherford.

The crash currently remains under investigation by the South Carolina highway patrol and the coroner.

Both Patriots Chairman and CEO Robert Kraft and Bill Belichick each issued statements on Friday remembering Patten and his lasting impact on the franchise.

Over his NFL career, Patten played for five teams across 12 seasons but put together his best and most memorable years as a Patriot from 2001-2004 during the first era of the dynasty.

Patten played in 54 regular season games with 44 starts for the Patriots and also played in six postseasons games with three starts during his New England tenure. He caught 165 passes for 2,513 yards and 16 touchdowns in the regular season and added 15 receptions for 174 yards with two touchdowns in the postseason for the Patriots, helping the team win its first three Super Bowls.

David Patten Memories from 2001 with the calls from Gil and Gino pic.twitter.com/vOc431nEsy

Today we lost a key member of the 2000s @Patriots dynasty.

In addition to his Patriots career, Patten also had stints with the New York Giants, Cleveland Browns, New Orleans Saints and in Washington. He played his final NFL game in 2008 and finished with 324 receptions for 4,715 yards and 24 touchdowns.

Before the start of the 2010 season, Patten formally retired from the NFL as a member of the New England Patriots.

As word of his death circulated across social media, Patten’s former teammates, coaches and current Patriots shared their reactions and offered up condolences. 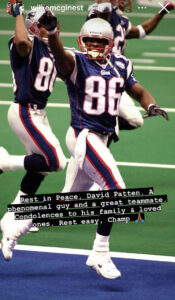 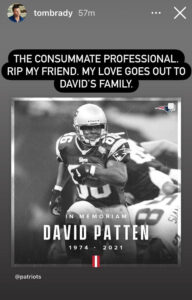 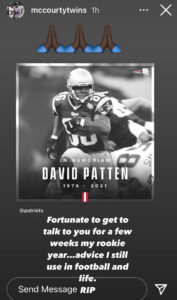 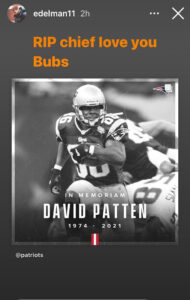 So sorry for the loss of a great friend and teammate. Prayers to his entire family. God bless 🙏❤️🙏 pic.twitter.com/L0Vvc3fgQf

Heartbroken to hear about the passing of David Patten. Beyond being a core player on our @Patriots championships, he represented all that was good.
Hard to articulate the impact he had on our locker room and all of us around him. He was a TRUE champion… Godspeed 🙏🏼🙏🏾🙏🏿 pic.twitter.com/HuD1BTXVvT

So sad to hear the news of a great man and teammate David Patten. My deepest condolences go out to his family. We lost a great one Rest in Power🙏🏽🙏🏽🙏🏽 pic.twitter.com/L1SrznbVqm

Sad to hear the loss of a great man in David Patten. Prays to his family… pic.twitter.com/2yvOd5yDRA

This one hurts bad. You know about his football heroics #legendary! What you don’t know is that there was something about David made you straighten up when you were around him. His look told you what he was thinking. He prayed hard for ALL of us! Rest In Peace Brother Patten🙏🏾 pic.twitter.com/aq3zSSNFzg