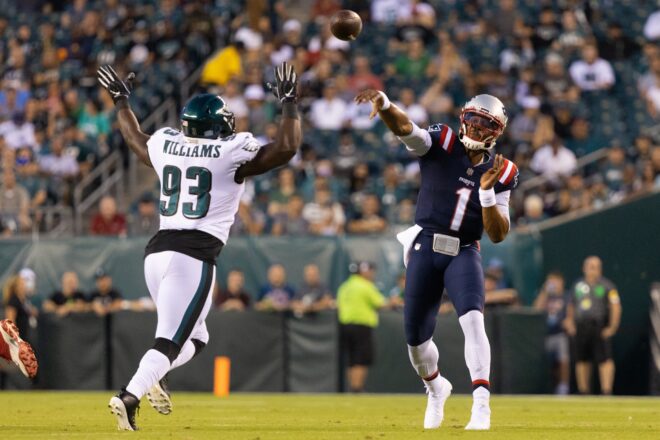 This is a review of my roster predictions, plusses, and minuses while providing some roster analysis.  I have added a Special Teams designation (ST) next to the core Special Teams players but listed them with the position they could play if needed.  The Practice Squad is unofficially forming and I report on those up until I submit the article.  I also highlight some new players to the Patriots roster.

The release of Cam Newton was a shocker.  I believe, as I wrote last week the COVID protocol misunderstanding last week was the deciding factor in choosing Jones as the starter.  Reports are circulating that some inside the organization were seething over the missed time by Newton.  The door was opened and Jones came rushing through with an outstanding practice against the Giants starters.  He also had an outstanding camp, grasping everything the coaching staff threw at him.  He was 8 for 14 on drives that led to scores or opportunities for scores in the Pre-season.  Pro Football Focus had Jones with the highest rookie QB ratings at 92.2.  He was 36 of 52, 1 TD, no interceptions, and no fumbles.  Overall passer rating of 97.3.  He did have 5 sacks but two of those were against the Giants starting D while he had the backup offensive line, and another was the final play of the half where he chose to eat the ball rather than throw it up for a possible Interception.  He admitted after the game that he held onto the ball a little too long.  The Giants did him a big favor by trying some exotic blitzes.

Brian Hoyer was as I predicted correctly cut, but that came as a surprise when Cam Newton was also cut.  Hoyer was supposed to be back on the roster when Harry is put on recall IR (minimum 3 weeks).  However, that changed when the Patriots were awarded WR/RB/QB Malcolm Perry on waivers from Miami.  Hoyer was signed to the Practice Squad.  That will only be temporary.  Perry right now is the backup QB!

I was surprised that Brandon Bolden wasn’t cut and brought back on Wednesday to hold a spot for another player (Jennings) to go on short-term IR.  However, Greg Bedard of Boston Sports Journal was a guest on Sports hub 98.5 the Felger and Mazz show today and he alluded that Bolden was hurt.  Bolden did not play in any pre-season games.  Could he be an IR candidate?

Johnson was another player I did not have on my list.  My thinking was that the new 2 TE sets would require 4 TEs on the roster.  Also, not many teams employ a Fullback anymore so the chances of Johnson getting through waivers and onto the Practice Squad was high.

The first three will play the majority of snaps.  Gunner Olszewski was omitted from my projection because of his drops.  Harry will go on short-term IR on Wednesday and be able to come off in 3 weeks.  Don’t be surprised if another player is claimed.  Olszewski’s position is not secure.  WR/RB/QB Malcolm Perry from Navy was awarded to the Patriots.  Perry had 304 yards vs Army in 2019 and followed that up with 213 vs Kansas in the Liberty Bowl.  Perry holds the single-season FBS rushing title of 2,017 yards.  This pre-season he was targeted 8 times with 6 catches.

Surprised LaCosse didn’t make it.  He was going to be the starter at TE before opting out for COVID.  He was hurt in the Philly scrimmage by a cheap shot by Defensive End Derek Barnett which led to a concussion.   By the way, that throw and injury were all on Cam Newton.  He led LaCosse right into Barnett.  Don’t be surprised if LaCosse makes his way back onto the roster at some point this season.  Basically, it’s a trade of Johnson for LaCosse.

The offensive line is a strength of this team and running the ball (while protecting the rookie QB) will be a priority.  The starters are a Top 5 unit.  Ted Karras was a starter and Captain for Miami last year.  I bet they wish they had him back. Yodny Cajuste quietly had a great Pre-season and emerged as the player he was expected to be when drafted.  It is a great story that he was drafted hurt, sat out his 1st year, got hurt again in year two pre-season, and sat out the 2nd year.  Justin Herron is a fine swing tackle.  I predicted nine (9) O linemen but didn’t see the trade coming for Yasir Durant.  The OG had 33 starts for Missouri at LT in the SEC.  He is big, at 6’6”, 330 lbs, for a Guard.  He played one game for KC Chiefs at RT and didn’t play well.  He gave up a sack and a couple of pressures.  In fairness, he is an RG, not a tackle.  Alex Redmond was cut but has been re-signed to the Practice Squad.

Had this group correct.  We lost Montravious Adams as he signed with the NO Saints.

Patriots signed Tashawn Bower to PS.  This unit is going to be fun to watch.

The Patriots could have used Brandon King as one of those temporary cuts to get to 53.  I am surprised they didn’t.  Anfernee Jenning must be hurt a lot more than anyone is letting on, to go on the IR for the season.  If Jennings had any chance to come back this year, they could have cut King with the wink and a nod, then bring him the next day when they add Jennings to IR.  I also didn’t have Langi making the cut.

I think they are a little thin here in the secondary with Gilmore going on IR for 6 weeks.

Thought it was the end of the line for Williams.  Gilmore out for 6 weeks (minimum) hurts.  I had Ross making the team.  Glad to see he is on the Practice Squad.  Dee Virgin has signed with SF PS.

A little thin here too!  However, both Mills, Williams, and Davis can play Safety.  Davis was a terrific college Safety for Texas Tech.  He started as a true freshman and played in 49 games over 4 seasons.  He wracked up 362 tackles with 101 coming in his senior season.

Both Bryant and Colbert have been signed to the PS.

No question Nordin has a big leg.  However, I never expected the Patriots to keep the streak alive for the 18th consecutive season by keeping an UnDrafted Free Agent on the 53 man roster.  Nordin was the only UDFA on the roster and he was far too inconsistent.

Greg Bedard had an interesting observation on Felger and Mazz that Folk looked a little “doughy” and not in good shape.  He compared him to former Raiders kicker Sebastian Janikowski, late in his career.  Folk already had a bad back and that wasn’t going to get much better for a player that will turn 37 in November.  Folk had the guaranteed money whether or not he made the team.

Practice Squad (as of this writing)

Mason was a 5th Rd pick (184 overall) (BAL) FB Michigan – He has Patriots written all over him.  One of my Draft Binkies this year and a player I selected in almost every mock draft I did.  He blew up players in the Senior Bowl practices.  Special Teams beast and can play some TE or ILB.  He is 6’ 2.6”, 246 lbs runs 4.77, ran a spectacular 6.89 3-cone, 37 ½ Vertical, and is strong benching 29 reps at 225#.  His mother has ties to West Roxbury.  His size/speed numbers would have been #3 for ILBs.  He hits like a train.  I have heard that Mason will be elevated quickly to the 53 man roster.

By: Robert Alvarez
In the latest episode of the Patriots "Do Your Job" documentary series, explore the construction, purpose, and journey of "AirKraft".
28 mins ago

By: Robert Alvarez
Fitzy and Kipp share their thoughts about the Patriots Wild Card Round matchup with the division rival Bills in Buffalo.
45 mins ago

By: Mark Morse
Playing the same team three times in the same season is very difficult., which will be the challenge for the Patriots as they face the…
4 hours ago 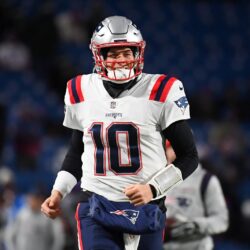 By: Ian Logue
Some thoughts heading into Saturday night as the Patriots get ready to face the Bills in the Wild Card Round out in Buffalo.
1 day ago

Patriots-Bills Week Wild Card Matchups, Who Has the Razor’s Edge?

By: Steve Balestrieri
If Wynn can’t go, it may be best to slide Trent Brown over to left tackle and place Michael Onwenu at right tackle.
1 day ago
wpDiscuz