1 year ago at 10:30 am ET
Follow @MarkMorse5
Posted Under: Patriots News 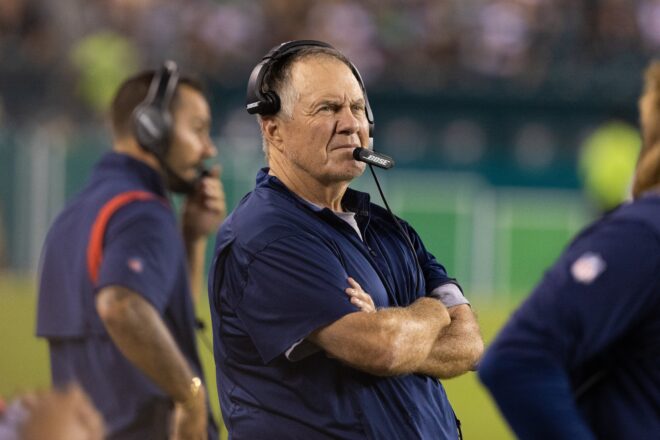 This is my final Roster projection ahead of the 4:00 deadline today.

Jones played well enough, demonstrated his understanding of the playbook, and showed the poise needed to be a starter.  So much so, the Patriots can afford to go with just two QBs.  Looking back at Tom Brady’s rookie season, he never showed the same poise in pre-season games or joint practices that Jones has.  Granted, Brady didn’t get the opportunity Jones has had.  In 2000, Brady was the 4th string QB on the opening roster behind Drew Bledsoe.  Could the fact that Newton is not vaccinated be the deciding factor on who starts?  This was Newton’s job as the starter.  He earned it.  However, can the Patriots run the risk that Newton will get sick again with COVID and not only miss time but become half the players he was after getting sick, just like last season?  Hoyer’s contract is guaranteed, whether he is on the active roster, Practice Squad, or cut.  The Patriots are allowed two veteran players on the PS and would like to keep Hoyer around as an emergency QB, mentor to Jones, and scout team QB.  This will be the beginning of Hoyer’s next career as he has coach written all over him.  He has also permanently moved to the Boston area.

Brandon Bolden will get cut, and despite being 31 yo, he will stick around and be added back to the roster due to his Special Teams play.  Someone will go on IR and Bolden re-signed.  Bolden is a veteran and therefore does not have to pass through waivers.  He becomes a Free Agent and will wait to be re-signed.  White can play WR if needed and that will save another spot there until they can get someone else on IR.  Stevenson’s development has been remarkable.  He has gone from needing to improve on “Everything” to a viable option if needed to play.  I originally had Michel traded.  He played well last year but the emergence of Rhamondre Stevenson made Michel expendable.

When the Patriots signed the double-headed monster of Jonnu Smith and Hunter Henry it made the fullback position obsolete. Johnson will be cut and signed to the PS.  They will not keep his International Player exemption so that he could be activated if needed.

Harry is an enigma.  He has played well in practice (Red Zone) but that hasn’t translated to the pre-season games.  He was only targeted once in the first game and twice in the 2nd before getting hurt.  He should have caught the long pass in stride at the end of the 1st half.  Instead, he dives, doesn’t make the catch, and injures his shoulder.  He can’t be traded now.  I think he makes the 53, then goes on IR (recall) and Bolden gets added back to the team.  Another thing going for Harry is the new mantra of coaches Mick Lombardi and Troy Brown, “If you don’t block, you’re not getting the rock”.  Harry is a very good blocker that can be used for a team that will predominantly run the ball.  Gunner Olszewski hasn’t progressed as a receiver as I had hoped.  He drops too many passes.  I don’t think his Punt Return prowess will be enough to keep him on the roster.  Taylor was the return man against NYG.

Kristian Wilkerson blew his opportunity to make the team by developing a case of the dropsies.   He had a great game against the Giants but it won’t be enough.  He is eligible for the Practice Squad, but I don’t think he will take another turn with the Patriots.  Tre Nixon played in the last pre-season game but hasn’t shown much but would probably go to the PS because he was a draft choice.  Isaiah Zuber played well against NYG with a TD on 4 catches in 5 targets.  I was impressed with his downfield blocking.  Don’t be surprised if the Pats make a trade or waiver claim on a WR.

Nixon and Zuber to PS

Matt LaCrosse was supposed to be the starter until COVID hit and he chose to sit out.  By all indications, he has had a fine camp until getting lit up in the Philadelphia joint practice (concussion).  With so much emphasis on 2 TE sets, I think they carry 4.  Asiasi could be the fullback if needed. Dalton Keene has gone to IR and cannot be recalled all year.  They must think a lot of the former 3rd round draft choice to keep him on the roster all year.  LaCosse could be a post 53 man roster IR.

I just don’t think Sherman is big enough for Tackle.  Will Sherman, Korey Cunningham, and Ferentz are cut.  Ferentz and Sherman are brought back via PS.  Cajuste was awesome against Philly and solidified a spot.  Marcus Martin played well but he went to IR to get down to 80.  Ferentz was an ironman in the 1st Pre-season game and is awarded one of the two veteran spots on the PS.  Redmond is a nasty run blocker and his NFL experience with the Bengals (24 starts ar RG) goes a long way to him making the team.

Montavious Adams played a lot vs NYG and Davis didn’t.  Usually, if you don’t play, you have made the team.  Byron Cowart, Akeem Spence, Bill Murray, Nick Thurman, and Adams are cut with Murray, Thurman, and Spence coming back via the PS.  Davis has a history of concussions.  Look for the Patriots to trade some of their D-Line depth before the cut-down deadline of 4:00 Tuesday.  This per Albert Breer, SI MMQB.  Cowart won’t make it through waivers.

This is a really good group of linebackers.  Hall is on PUP and can be moved to Reserve PUP and out a minimum of 6 weeks.  Anfernee Jennings ends up on IR.  I think Langi is cut and comes back after someone goes on IR.  McMillan was having a terrific camp and would have made the team as a Special Teams player.  McMillan is on IR.  McGrone was drafted knowing he was hurt and would need a red-shirt year on IR.

Gilmore goes on IR after making the original 53.  Bethel had a good camp at CB, a position he has not really played well in his career.  He had a big pass breakup that led to an interception against Philly.  Jojuan Williams has been a huge disappointment and looked awful against NYG.  Time to cut Williams, another failed 2nd round DB drafted by Belichick.  Cut Dee Virgin, Michael Jackson, and All are eligible for PS

Joshua Bledsoe is on NFI, Adrian Colbert will be is cut.  Myles Bryant should go to IR.  Bryant’s size is working against him.  Phillips played the Big Nickel LB which is why I only go with three true LBs.

Quinn Norbin is cut.  Norbin has a big leg but is inconsistent.  King is another veteran ST player that is well respected by his teammates.  Bailey is an All-Pro, Cardona is solid and Slater may someday end up in the hall of fame.  Norbin if he shows anything could be kept on PS

Practice Squad – Hoyer and Ferentz are the two veteran slots.  Zuber, Nixon, J. Johnson (without exemption) Sherman, Murray, Bowers, M. Jackson, Colbert, Nordin … look for 5 more to be added from other teams after Sept 1 to reach the 16 man Practice Squad limit.  The Patriots are known for overpaying their Practice Squad players to keep their loyalty and prevent other teams from poaching them.

Well done, we’ll see how close you are tomorrow. Think you’ll be closer than the other predictions I have seen.