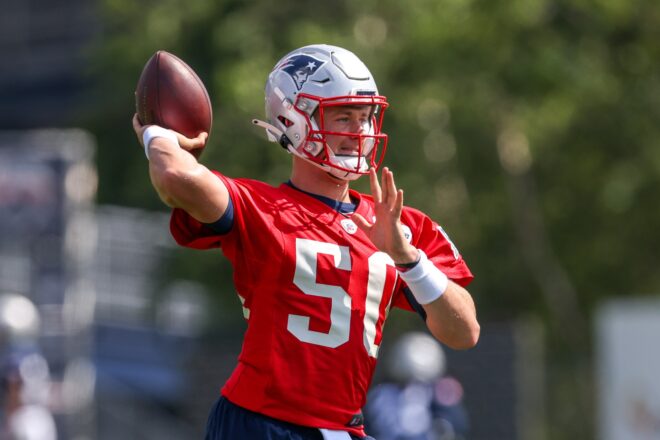 1) Bill Belichick put his quarterbacks through their paces on Monday, with both Cam Newton and Mac Jones running the two-minute drill as they continue getting ready for the upcoming season.

According to most reports, it was Jones who held the edge over Newton when it came to running the drill, running the offense smoothly and with precision.  Newton wasn’t terrible, but he had moments where things got a bit out of rhythm and he was also picked off at one point.

The problem is, the two have been fairly even for the most part, with both players bringing it each day in practice.  While Jones has recently been stringing together some good days, Newton has continued doing enough to seemingly hold the job.

With preseason contests coming and more competitive situations about to unfold, it’s going to be fun to see how the two react and whether or not Jones shines against what should be lesser players.  Newton will probably get the snaps against the starters, while Jones will likely see a significant amount of time against opponents’ second and third-string players.

That may change over the course of the final two preseason contests, as the coaching staff may want to see how Jones handles himself against first-string players, much like they did in previous years when looking at the back-ups behind former Patriots QB, Tom Brady.

But either way, the competition will likely get interesting in the coming weeks, setting up what should be a compelling finish to what’s already been one of the more intriguing training camps in recent memory.

2) N’Keal Harry had been coming on strong in recent days, having strung together some solid practices and putting himself in the mix for a roster spot.

The former first-round pick came into training camp with a bit of a cloud over his head, having demanded a trade through his agent last month, which obviously never materialized.

Belichick seemed to squash any issue between the two players and Harry has been both doing and saying the right things thus far, which seemingly has him on the verge of potentially putting together a good season in 2021.

Harry and Jones have been building chemistry, with the rookie at one point connecting with Harry on 7-of-7 throws over the course of a couple of days last week.  Meanwhile, Newton has been inconsistent targeting Harry, with the two seemingly still not quite on the same page at times.  Newton has been heard praising Harry during numerous moments and he’s remained supportive of the embattled receiver.

Should New England elect to keep Harry in the fold, the third-year player appears on track to grab one of the final roster spots if he can continue stringing together some strong practices.  However, he’s taken a little bit of criticism for his performances in competitive drills, which remain an area to watch as he continues trying to either establish a role for himself or drive up his own trade value.

3) Patriots tight end Hunter Henry’s shoulder injury is reportedly not serious enough to keep him from being ready for the regular season, which is definitely good news.

Henry got banged up in practice recently but reports indicate the results of the tests indicate that the club should have him out on the field against the Dolphins next month.

The veteran tight end suffered an injury to his left shoulder on Sunday and wasn’t on the field for Monday’s session, but reports have fortunately indicated that he underwent an MRI and avoided anything significant.

Henry signed a 3-year, $37.5 million contract this offseason and is expected to be a significant contributor to an offense that also now has Jonnu Smith lining up opposite him.

Smith has been both strong in the passing game as well as a devastating blocker and provided Henry returns and stays healthy, it should make for quite a formidable pair for opponents to have to deal with in the coming months.

4) Out in Cincinnati, quarterback Joe Burrow has continued trying to work himself back into form during training camp, although it apparently hasn’t been pretty.

The former first-round pick has reportedly struggled and not looked quite like himself thus far, leading to questions about his health coming off of what was a devastating knee injury that cut his rookie campaign short.

However, Burrow reportedly cleared the air and said that it’s not his health that’s the issue, but more of simply trying to clear the mental hurdle of getting back to competing against “top-level competition”.

Coming off the injury, he also admits that having people moving around him is something he’s also trying to get used to, which he said is just going to take time.

“It’s just getting more comfortable in the pocket,” Burrow said via PFT. “Today we’re going to have a bunch of people around me in 7-on-7 and individual drills just to get that feeling back. That’s the last step for me, just get my pocket presence back and understanding when I’m pressured and when I’m not. Just getting that whole feeling back that I’ve been really good at for a long time.”

The good news is he’s reportedly been moving around well and not having much trouble running and throwing the football.  The biggest issue now is likely going to be having people coming at him or having bodies in and around his feet, which given what he just battled through, if he’s still a bit apprehensive about that, it’s definitely understandable.

For now, Burrow knows that he’s still going to have to continue getting comfortable with that again and fortunately, he’s still got a month to go before he’s back out there playing in competitive games against opponents who even despite the injury, likely won’t go easy on him.

5) While New England’s rookie quarterback continues stringing together some solid practices, the Jets’ Zach Wilson is apparently struggling to do the same.

According to ESPN, Wilson has been inconsistent so far in camp and during the team’s intrasquad scrimmage on Saturday night, he threw two interceptions and led the offense to just 3 points on seven possessions.

He reportedly bounced back for part of Monday’s practice, only to then proceed to finish the day with seven straight incompletions.

New head coach Robert Saleh says that what Wilson is dealing with is just part of the process and that it’s just going to take time to work through it.

“It is going to get worse before it gets better,” said Saleh via ESPN. “But he’s at that point now where he’s going to be able to stack up [good] days, and we have all the most utmost confidence in him and his ability, his ability to figure out the mistakes and correct him and get to a better place.”

Wilson is expected to start Saturday night’s game against the Giants during the team’s first preseason game.  For anyone interested to see how the Jets might look this season, it definitely might be a fun one to keep an eye on.

By: Robert Alvarez
Devin McCourty will appear in his 200th career NFL game on Thursday night against the Buffalo Bills, Robert Kraft honors his milestone.
48 mins ago