1 year ago at 6:55 am ET
Follow @IanLogue
Posted Under: Patriots News 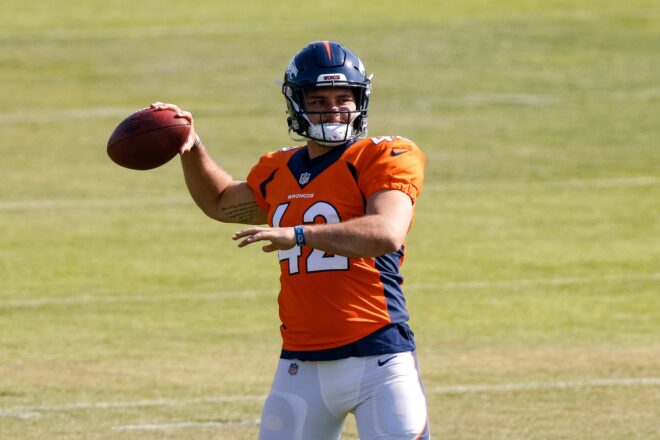 Here are today’s news and notes:

1) The Patriots apparently added a long-snapper yesterday, with agent Brent Tessler reporting that his client, Wes Farnsworth, signed a contract with the team.

The New England Patriots just signed my long snapper Wes Farnsworth (University of Nevada, Reno). Talented guy who has spent parts of the last two seasons with the Dolphins and Broncos.

Farnsworth spent the last two seasons with Miami and Denver, with Farnsworth not making the cut with the Broncos after being released at the end of training camp last year. He was originally an undrafted free agent in 2019 for the Dolphins, but was also among the final cuts that year and hasn’t quite been able to break through into the NFL just yet.

The former University of Nevada standout seems like a long shot to make the roster given that the team has incumbent Joe Cardona, who has been terrific.  However, his addition could also be because New England has three kickers currently on the roster and adding Farnsworth would break up the reps in practice.

Here’s a video of him from his hometown from 2019, with Farnsworth talking about what it was like chasing his dream:

Either way, hopefully, he’ll do enough to potentially end up on someone else’s roster if he doesn’t work out here.

2) One of our moderators, John Morgan, does a great job of providing some terrific historical tidbits for various players and he posted a thread highlighting the fact that yesterday saw former Patriots QB John Friesz turn 54, along with some other interesting bits that went along with it.

Friesz was the club’s back-up QB behind Drew Bledsoe back in 2000, which was obviously the same year Tom Brady was drafted.  That was also the season New England carried four quarterbacks, which also included Michael Bishop.

The veteran and Brady became friends due to the fact that they were very similar in terms of their mindsets, with Friesz also having to work hard to become a starter in the league.  At the time, Friesz had no idea that the former Michigan QB would become what he was but looking back, there were certainly moments that stood out.

One such moment was a Week 11 match-up during the 2000 Patriots season, which came following a frustrating 19-11 loss to the Browns that left New England at 2-8 on the year.

Brady, who wasn’t used to losing very often in Michigan, made a comment to Friesz that the veteran mentioned just this past February when the former Pats QB spoke to the Spokesman in Idaho about his time in New England.

Following that game, Brady just couldn’t understand the vibe in the locker room at the time, where he obviously didn’t feel players had the sense of urgency they should have had given their record.

“I remember we had lost a game at Cleveland, and we were sitting by each other on the bus,” Friesz said. “He says, ‘I just don’t get it. Why doesn’t anybody seem to care?’ I had to explain that it is much different than college and high school. People are more out for themselves here.”

For those who remember that period, Belichick cleaned house with quite a few players who were on that roster after that season.  The free agents he brought in weren’t big names, but largely guys who loved the game and loved playing football like Roman Phifer, Bryan Cox, Anthony Pleasant and Mike Vrabel just to name a few and it drastically changed the locker room dynamic heading into the 2001 season.

As a result, it obviously made a significant difference and Brady eventually provided the spark that changed everything after Drew Bledsoe got hurt against the Jets in Week 2 and the rest, as they say, is history.  But it was interesting to hear Friesz’ thoughts on that period, especially knowing what we know now.

3) Meanwhile, Deshaun Watson is apparently trying to start rehabilitating his image after posting to Instagram for the first time since back in March prior to when all of his accusations started.

Watson posted a video of the fact he’s working out and trying to get ready for the season despite the fact these issues still remain unresolved.

Deshaun Watson is working out. He posts on social media (IG story) for the first time since March 16 – the evening he released his statement that he was aware of a lawsuit & he looked forward to clearing his name. #NFL #Texans pic.twitter.com/RmZv2deRHn

Watson remains diligent when it comes to proclaiming his innocence, saying “I have never treated any woman with anything other than the utmost respect” and that he looks forward to “clearing my name”.

He still faces an uphill battle.  With more than 20 accusers it’s still not clear if there’s enough evidence where he’ll potentially face a potential suspension by the NFL for violating the league’s Personal Conduct Policy.  Not to mention that a lot has happened around the league quarterback-wise, which has definitely hurt his trade market.

We’ll have to see how it plays out but it still seems like it will be a while until there’s a resolution to what has definitely been one of the more troubling stories of this offseason.

4) Albert Breer of SI.com was asked in his mailbag about his thoughts on what the signing of Brian Hoyer meant to the Patriots QB room and who it might affect the most.

Breer believes it could potentially mean the end for Newton if Mac Jones excels in camp this preseason, as he’s not sure how Newton would fit in as a back-up.

Obviously the one that doesn’t fit with the others is Cam Newton (though I could make an argument that Jarrett Stidham’s background matches up cleaner with Newton’s than Mac Jones’s or Brian Hoyer’s), and so I think what you’re asking is whether Hoyer’s return to Foxboro could mean the end for Newton there.

It might. It’s easy to see how, if the Patriots really liked what they saw from Jones at rookie camp over the week, they might think it’s time to get him a veteran sounding board in case he winds up starting—on the premise that Newton wouldn’t fit as a backup. Or, if you think about it, it also could set the Patriots up to give Jones a true redshirt year, where if Newton were to get hurt, they wouldn’t have to press him into action.

And then, guess what. You’ve got your answer on why bringing Hoyer back makes sense. He will be, at baseline, a good resource for the No. 15 pick, as a guy who’s spent much of his 12-year career in Josh McDaniels’s system. From there, he’d work in either scenario.

Breer also points out that it’s a little early to jump to any conclusion, writing that, “It’s May. I wouldn’t overreact.”

The more likely scenario seems to be that the pressure is likely on Stidham, who could be the odd man out in this scenario and provided he can put together a good preseason, Belichick could flip him in a trade like he did with Jacoby Brissett a few years ago after sending the third-string QB to Indianapolis for receiver Phillip Dorsett, who ended up being a nice addition to the roster.

5) One other interesting note is the fact that former Jaguars QB Mark Brunell has apparently landed in Detroit as the team’s QB coach.

Brunell, who is now 50-years old, is back in the league after having spent the previous 17-seasons coaching high school football.  The addition of Dan Campbell as head coach with the Lions is what inspired him to come back, with the two having been teammates in New Orleans where they became good friends.

Detroit acquired Jared Goff this offseason and Brunell feels like they have something special and he’s looking forward to helping them get back on track.

“Very talented, hard-working, positive attitude, everything that you’re looking for,” Brunell said about Goff via the Detroit News. “Competitive quarterback that has won, I believe as a starter, 42 games in addition to leading a team to the Super Bowl. That’s who we’re getting. That’s who I get to coach and I’m looking forward to that.”

By: Robert Alvarez
The Date and time for Vince Wilfork's Patriots Hall of Fame induction ceremony is announced by the team,
50 mins ago