2 years ago at 5:00 am ET
Follow @IanLogue
Posted Under: Patriots News 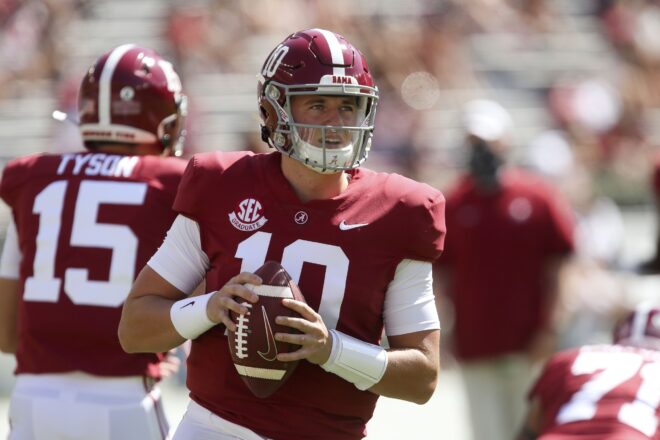 1) The discussion on Monday on sports radio obviously centered around Mac Jones, who will likely be mentioned a lot in the coming months after being taken 15th overall last Thursday night.

After all, Jones isn’t a sexy player in the sense that he’s not like Ohio State’s Justin Fields.  He’s not someone who is going to run around and make plays with his feet and throw bombs deep downfield.  Or at least not yet.

Many people have already tried to make the argument that the Patriots should have gotten aggressive and traded up to go after Fields, who plummeted down the board after most experts thought he wouldn’t make it out of the top 10. Instead, he landed in a spot where the Chicago Bears were able to jump up the board to #11 and select the Ohio State standout and potentially solidify their own QB position.

Good for Chicago if it works out.  They’ve forever been a decent QB away from becoming a relevant football team again.

But for the Patriots, Jones honestly fits the mold of what they need.  Many people can go back and look at the 2001 season and they’ll likely remember that Brady was a player who killed opponents with a thousand cuts, just making accurate read after accurate read and it was that consistent type of approach that made him so deadly.  Years later, having already won three titles, he still kept working and improved other areas of his game, becoming a complete quarterback and solidifying his place in NFL history.

That’s what the great ones do, but it starts with the basics.  Jones completed 77% of his passes in college last year over the course of an entire season, which ended in a National Championship.  You can make the argument he had talented coaches and a talented roster, but it doesn’t change the fact he outperformed even some pretty talented guys before him.

Mike Reiss had a column on Sunday where he spoke with Joe Dickenson, who works with Jones.  He said the former Alabama QB has “the fastest eyes”, which is exactly what made Brady so successful.  One of the things that Bill Belichick talked about in the early days was the fact that if a play broke down, he could ask Brady exactly what happened and he never made excuses, with the quarterback always explaining precisely what the coach would later see on film.

Brady saw everything going on during a particular play.  He had and still has that type of vision.  That’s a rare trait and one that it appears Jones possesses.

While it’s too early to anoint anything to Jones just yet, there’s no denying he’s got the drive and the mental part of the game to be successful.  He may not yet have the physique or the physical tools, but having seen Brady during his first season, that cocky kid from Michigan certainly didn’t either.

It might not be exciting, it might not be electric, but when the time comes, there should be reason to be quietly intrigued about the future.  And just like he did for his old coach, Nick Saban, if Jones can pick teams apart and let his guys make plays, it’s safe to say, we’ll all be feeling pretty good about his future here in New England.

2) Speaking of which, I’m good with the Patriots rolling with Cam Newton to start the 2021 season and even turning the reigns over to Stidham if things go south by midseason.

It doesn’t make much sense to put Jones in until he’s absolutely ready, so I don’t fault Belchick from declaring Newton as the lead QB heading into training camp.  After all, despite last year’s results, Newton has a full year in the system and if he can play like he did early in the season, they should be better than they were in 2020.

The question will then come down to Stidham’s growth this past offseason.  He’s already shown some fight, so will he continue to work just as hard and compete like hell to try and bury Jones on the depth chart?   Or will he decide he’s done here and start thinking about his future somewhere else?

It’s amazing to think that at this time last year, the Patriots emerged from the draft without having taken a QB.  That left Stidham suddenly as the potential favorite to start the season with a camp competition looming between he and Brian Hoyer.  Then Newton was signed and several reports indicated he didn’t take control and attack it the way the coaching staff had hoped he would.

That was certainly a fairly dramatic turn of events.  As a result, with Jones’ addition and the accolades that go along with him, I’m definitely curious to see how Stidham responds.

3) Meanwhile, while Aaron Rodgers hasn’t been traded by the Packers just yet, it seems fairly likely that Denver could ultimately be where he’s headed before the 2021 season eventually begins.

The fact the Broncos didn’t take a quarterback during the entire draft appeared to be the most obvious indication, especially when they had a shot at Fields with the 9th overall pick and instead opted for defensive back Patrick Surtain II.  That raised quite a few eyebrows as it was and the fact things played out the way they did, it now has fans in the Mile High city salivating at the possibility. It’s no secret that they’re not 100% sold on Drew Lock and despite adding Teddy Bridgewater, Rodgers’ addition would instantly put them in the mix as AFC favorites.

Las Vegas seems to feel the same way.  Denver’s odds at being the Super Bowl favorite suddenly jumped from +1500 to +600, which means they seem to believe the Broncos could indeed be landing the long-time Packers QB.

Despite threatening retirement, Rodgers likely doesn’t want to go out without getting back on top one more time.   After all, the move makes sense.  It gets Rodgers out of the conference and out of their hair, while also allowing them to hopefully recoup something significant draft pick-wise for the trouble.

Fortunately, the Broncos are off of this year’s rotation for New England, which means that Rodgers wouldn’t be an issue unless the two clubs met in January.

Then again, if it does end up being a problem, that means New England had a successful year since they’d be back in the postseason mix.  On the off chance that happens, let’s just hope it’s at Gillette since we all know how playoff games in Denver tend to turn out.

4) Monday marked a key date for the Patriots, who exercised the fifth-year option for Isaiah Wynn but not for Sony Michel.

Wynn has battled injuries during his tenure with the team but has emerged as a viable tackle and given their current lack of depth, the move made sense.  For Michel, he’s currently part of a crowded running back room that will likely be pretty competitive heading into camp, especially after the addition of Oklahoma running back, Rhamondre Stevenson, who they selected in the fourth round this past weekend.

Stevenson is a beast and like teammate Damien Harris, he’s a punishing running back.  Michel is shifty and has done a good job finding holes and picking up yardage, with the former Georgia standout being a key part of the reason they won championships after taking him.  Unfortunately, he’ll forever be criticized primarily because of where he was taken and who New England passed up in his place.

He hasn’t been great, but he’s been good enough.  Unfortunately, that didn’t get him another guaranteed season and it will be interesting to see how this little subplot ultimately plays out.

5) Finally, it’s hard not to end this without recognizing Ernie Adams, who announced his retirement on Monday.

Belichick’s long-time confidant has been such an intricate part of the team behind the scenes, with Adams having been involved in every key moment of this franchise since Belichick took over the team in 2000.

The Patriots head coach had said over the weekend that this would be Adams’ final draft.  Unfortunately, it looks like it was also his final time with the football team as well.

“The last 21 seasons with the New England Patriots have been extraordinary for me,” Adams said Monday via the Boston Globe. “I am fortunate to have been part of a team along with Bill Belichick, outstanding colleagues, patient owners, and a lot of great players. It is time for me to stop working and join the many wonderful fans who have been with us for this run.”

Adams’ final contribution was the selection of Tre Nixon, who Belichick told reporters during his press conference was a guy who Adams “personally selected”.  Nixon’s incredibly fast and quick, recording a 40-time of 4.44 40-time along with a 6.81 three-cone drill.

Those types of attributes are rare and the fact we’ve learned this was Adams’ guy should leave fans excited to see what happens with the club’s 7th round pick.

As for Adams, best wishes to him as he moves onto his next chapter.  He’s definitely one in a million, and he’ll be missed.