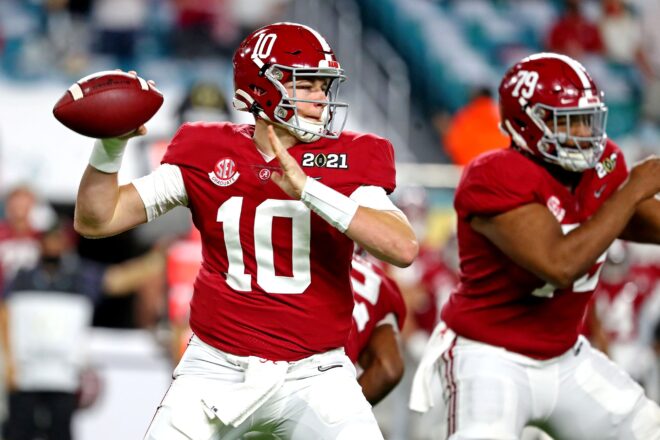 On Thursday night, the New England Patriots drafted their quarterback of the future, taking Alabama’s Mac Jones with the 15th overall pick.

In the moments following the selection, Jones wasted no time sharing his excited reaction with NFL Commissioner Roger Goodell on the draft stage in Cleveland.

Take a listen to what microphones caught Jones saying to Goodell below.

Mac Jones to Roger Goodell on joining the Patriots,

Jones later reiterated during his interview with NFL Network how much he wanted to be a Patriot “all along” and “can’t wait to play for the greatest franchise in NFL history”.

A few of Jones’ Patriots teammates welcomed him to Foxborough over Twitter following the news. 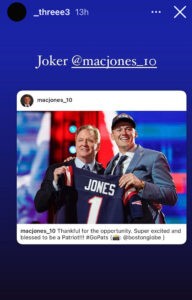 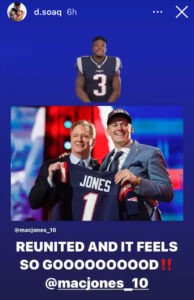 Despite the high expectations, Jones acknowledged it’s far from a guarantee that he’ll be starting for the Patriots right away.

“I’m actually joining a really great quarterback room with Cam Newton, who has played in the NFL for a really long time. He’s earned the respect of his teammates, going into New England, being a captain,” Jones said Thursday night. “And then you got Jarrett, who I really loved watching at Auburn and kind of use as a role model. Both those guys are role models to me right now and I’m just going to go behind them and learn how they did it.”

So there you have it, Jones’ road to becoming “QB1” in New England has officially begun.

By: Robert Alvarez
Former Patriots WR Deion Branch returns to his Alma Mater University of Louisville as the director of player development.
23 hours ago
wpDiscuz